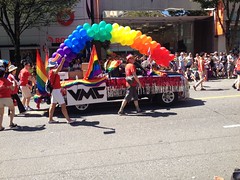 Sunday, August 3rd, it was time for the Vancouver Pride Parade. The parade is a celebration of the rights of the LGBTQ (lesbian, gay, bisexual, transsexual and queer) community. We meet up at a bus stop not far away from Burrard Station, and then walked to see the parade.

The parade went on for 3 hours. Stretching from Robson Street to Sunset Beach, there was an endless number of caravans decorated for the special occasion. Also a lot of people were dressed up in colourful costumes. At the sidewalks hundreds of thousands of spectators were gathered to watch this crazy but amazing show unfold. It was impossible not to get in a good mood when standing in the crowd of spectators. Everybody was cheering, especially when some of the big caravans were passing by shooting lots of confetti all over. 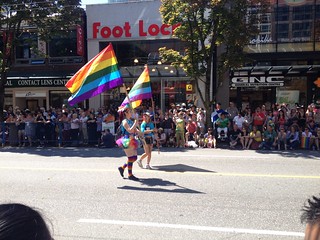 amazing to see this parade being represented by everything from university students and nurses to the Vancouver Fire and Rescue Services and the Vancouver Police Department. Of course the parade also offered a great opportunity for different companies for a bit of advertisement. However, most of the participants in the parade were making a great deal of their costumes and the decoration of their cars and caravans. However, the celebrations didn’t finish with the end of the parade, and the festivities continued at Sunset Beach.