Review: Visit to the Vancouver Aquarium 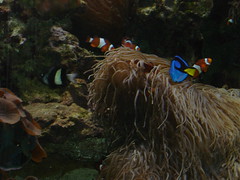 Saturday we went to the Vancouver Aquarium to get an experience out of the ordinary. As we went through the entrance we of course had the opportunity to get a picture taken by the aquarium staff. As we went through the aquarium it became obvious that perhaps it was a bit bigger than expected. Not only does the aquarium host lots of colourful fish, it also has a small rainforest including parrots and butterflies. The aquarium also has a 4D-cinema, where it is possible to not only see but also get a feeling of the ocean as a bit of water is sprayed out at the audience. As we walked through the aquarium, we quickly agreed that the penguins were the most entertaining attraction at the aquarium. They all have this funny way of walking. 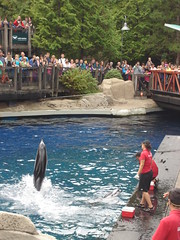 For some time there has been protest about the aquarium keeping dolphins in captivity. Aquarium managers and staff agues that it’s only doing rehabilitation programs, while doing research in order to get to know more about the dolphins. They also argue that they want to give visitors knowledge about the dolphins. The dolphin show was surely interesting to watch, but has also been argued by protestors and activists to be unnatural.

The time went by fast as we were looking at all the amazing creatures. It took us about 3 hours to get through the entire aquarium.