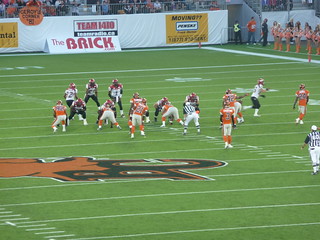 This Sunday, November 30th, a big event will take place in Vancouver. It’s the Canadian Football League’s championship, the Grey Cup, which is coming to Vancouver. This will be celebrated with lots of events in several places around downtown. This Saturday a great parade will celebrate Canadian football with marching bands and much more. Unlike some of the other events leading up to the Grey Cup Championship, it won’t cost you a fortune to watch this parade… in fact it’s for free! 🙂

We will meet up in front of the Joey Burrard Grill/Lounge at 10am. Joey Burrard is situated only 500 metres walk from Vancouver City Centre Station.The parade finishes at 12pm at Dunsmuir Street and Granville Street but we’ll move on to watch the Grey Cup cheerleader competition at Vancouver Convention Centre, West Building, Exibition Hall C. Cheerleaders from across the country are competing against each other. And there’s free entrance!

If you’re not able to make it till 10am, just show up in front of the Olympic Cauldron / 2010 Olympic Flame (Coal Habour) right next to the convention centre at 11:00am.

Click here link to get an overview of the area in which the parade will take place.