HIGHLIGHTS REVIEW OF THE YEAR 2015: April, May, June

In our first review post last week we started talking about what was going on in the first three months of the year; let’s have a look what we did in April, May and June!

April started with another new INTERNeX-PR-Coordinator-face who joined the INTERNeX community:

Natasja, a 23-year-old student from the Netherlands, who came to Vancouver for doing a practicum as part of her Bachelor study program. As a PR Coordinator she was responsible for organizing trips in and outside Vancouver, organizing Pub NiGHTS but also the contact person when a candidate encountered difficulties.

Especially our weekly Pub NiGHTS give our interns the opportunity to meet new people and extend their social network. Pub NiGHTS at Blarney Stone, Marlone’s, The Lamplighter, Steamworks Brew Pub and The Cambie are always popular. Therefore we certainly had to show our new arrivals the ‘hottest’ pubs in town.
MAY

The long weekend in May offered our candidates the perfect opportunity to join the four-day trip to the Rockies. INTERNeX usually goes to the Rockies with West Trek twice a year; once in spring and then later in the year where we experience a part of the Canadian Rockies.

The itinerary is basically the same: we first stopped in Hope, Kamloops, then Valmont, Jasper, Golden and Banff. Among others we visited Mount Robson, the Last Spike, Lake Louise and many other highlights you need to see when you are in the Rockies. To make a long story short we saw tons of gorgeous places and had an amazing time with our tour guide who we called Papa Wolf. To get more information about our Rockies trip, click here for INTERNeX goes Rockies – Part 1 and here for INTERNeX goes Rockies Part 2.

Other than going to the Rockies we also set up Pub NiGHTS every week. For instance we participated in the Trivia Night at Moose Down Under. Surprisingly, we did not know a lot of answers, but I don’t think that affected the fun we had!
JUNE

Vancouver is a very multicultural city therefore it has a lot of cultural diversity to offer. In the middle of June the annual Powel Street Festival, a special Japanese-Canadian festival, was on and exhibited Japanese art, culture and heritage. I know … doesn’t sound that interesting but you get the chance to learn something about the Asian culture in the heart of Vancouver. AND, as you probably already noticed, Vancouver has a huge Asian community that means a lot of people are proud to present a part of their history.

Additionally one of Vancouver’s largest and most well known festivals called Celebration of Lights, an annual musical fireworks competition with an estimated attendance of 1.4 million people each year, started in June.

The forecast for the last weekend in June promised good weather. And there we go! We had sun, blue sky and around 30°C the entire weekend. That called for a BBQ! 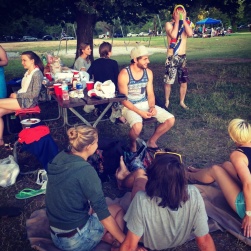 Everyone brought food, drinks and snacks. Chris brought a volleyball and Laura a Frisbee so we could throw around. Proudly I can say that we enjoyed the summer to the fullest!

Another highlight in June was the appearance of Amiel, a 24-year-old student from Germany in his senior year working on his Bachelor in International Business Administration, who supported Natasja with the different tasks a PR Coordinator has to face. Hey Amiel!