Saturday morning, 7.45am. Prepared with hiking shoes, sunglasses and lunch packages, 16 motivated people gathered at Pacific Central to spend the day in Squamish. Everyone was ready for the big hike. Well, everyone except for our bus… Unfortunately, the bus company cancelled the ride we booked our tickets for. To be honest, that was not the best news to hear at this time of the day. Going back home? No way! So, some hot discussions later, a bus was eventually arranged for us and the adventure could start.

About an hour later, we stepped out of the bus. We stood directly in front of the gondola, the one we would take to get down after our hike (at least that is what we still thought would happen). But before heading to the trail, we had to celebrate. It was Lore’s birthday! And so, we had a chocolate cupcake for her with a candle, a birthday song, a crown and even a birthday balloon; the full package for our Belgian birthday girl.

The sky promised a lovely day and even in the shadow under the trees, it was perfect! Just like many other people, we followed the signs of the sea-to-summit trail (again, that is what we thought). The first part of the trail was quite steep with many stairs and steps of stones. No problem for our motivated group, so we made our way up along the waterfall with some breaks to enjoy the views. Every ten minutes, I heard a ‘Happy birthday’ – ‘Thank you’ conversation between Lore and some hikers on the trail. The balloon did its job, so she a lot of attention during the day. 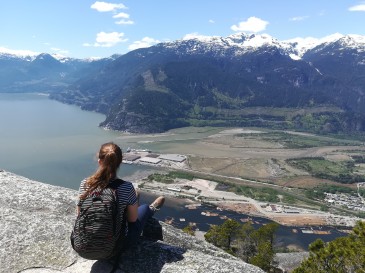 The final part before reaching the top of the mountain was more challenging. The trail ended in rocks that we had to climb up. Ropes installed in the rocks and a ladder helped us to overcome the last metres until the top. Not being surrounded by trees anymore, finally allowed us to see where we were actually standing. Wow! The view was just amazing! After the past exhausting hours, it was time for lunch break. We found the perfect spot and could enjoy our sandwiches while looking at mountains with snowy tops. Some people took a power nap and some even came up with the great idea to use some sun cream.

Recovered and ready for the next part, we continued our trail where we spot even more
beautiful sceneries. While looking around and taking pictures, we suddenly saw it: the gondola that was supposed to be our destination of the hike. Frankly, it was still quite far away, so we better hurry up a bit. It was weird though that the trail continued downhill… That is when we became doubtful whether we were on the right trail or not. A local hiker could confirm that we actually weren’t. Without noticing, we left the official sea-to– 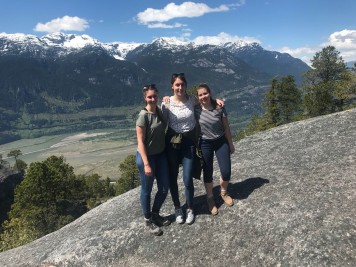 summit trail already hours ago and hiked the Stawamus Chief instead. Next surprise of the day! There was nothing else we could do, but walking down again. So that is what we did until we reached the base of the gondola again. Since there was still time left until the last ride down, some of us decided to take the gondola up. And what a beautiful outlook we had waiting for us at the top: White Mountains, a blue sea and a green forest. Amazing! We walked over a suspension bridge and enjoyed both the sun and the landscape.

After riding down the gondola (surprisingly, no one wanted to hike), some of us took another ten minute walk to the Shannon Falls. Impressive to see how much water can come down from a mountain. We rounded the day off with dinner and laughs about this day full of surprises. At least the bus ride back to Vancouver did not have any problems and we could all get our well-deserved sleep. I had a great day and was happy that so many of you joined us on this adventure!

Sunday, it was time to relax. Well, only in the morning though, because the next active program was already planned for the afternoon. We only trained our legs Saturday, so it was time to get the arms active as well. We reserved our seats for a dragon boat session during the Community Paddling Day of the Dragon Zone Paddling. Perfect weather for that! After a short introduction, Stefan, Lisa, Lotte, Angy, Nadine and I were equipped with lifejackets and paddles. So, we spend our afternoon learning how to paddle in a dragon boat on False Creek. As a highlight of this hour, we could spot a sea lions’ head above the water. Finally, we competed with the other boats in fun races. I spent the rest of the afternoon with coffee and our paddling crew at the seaside enjoying the sun.

Take care of your sunburns and see you on Wednesday for our PuB NiGHT!