Last night was very eventful. We started our PuB NiGHT off at the Beaver Bar, which is located right in the centre of downtown at Granville St. The INTERNeX gang was well presented as 20 of us in total showed up. Since everyone was having a blast we didn’t want the night to end so some of us continued the night at the Met. 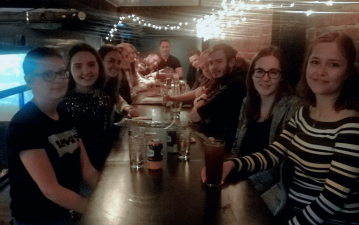 On Wednesdays the Beaver has a bingo night and at least I was super excited about it because I haven’t been playing bingo since I can remember. The Canucks were playing last night and the game was showed at the bar so we needed to wait for the game to end before the bingo could start. The end of the game was really good tho so we didn’t mind waiting for a bit. After the Canucks took the win with the score of 7-4 it was time for the Music Bingo. We all got our own Bingo sheets and we were ready to start. Last night the INTERNeX gang was feeling super lucky and we did not only win once but twice!

After three rounds of Bingo we decided to change the bar. Some of us went home and about half still continued to the Met. I had never been there before so it was nice to see some new places. As weird as it sounds I’d say the time we spent at the Met was somehow really active. First we played some table tennis sadly ending up loosing all the Ping-Pong balls. The Met has Karaoke so of course we had to take a part of that too. We also played some pool and Lukas even played one round of Flipper.

We really took everything out of last night and now it is time to turn our heads towards the upcoming events. This weekend we are visiting the Vancouver Fashion week which I am super excited about! There will also be more information about the amazing Rockies trip coming soon.

Thanks to everyone who showed up, enjoy the sunny day!