Shine bright like a diamond it is Thursday! I hope everyone is feeling great after last night. Once again we had a great pub night with awesome people. Wednesdays are one of the highlights of the week for me because I love to spend time with a big INTERNeX gang and find out how everyone is doing. Let’s see how our last night went.

This week it was time to try out the Yagger’s downtown. It is located at West Pender Street in a fairly central location. The night started at 8pm as usual and not too soon after that our tables were full of INTERNeX people. We also had some new peeps joining our gang this weeks and it was great to see some of them at the Pub Night. All in all we stayed at the Yagger’s for a couple of hours, had some drinks, food, and great conversations. 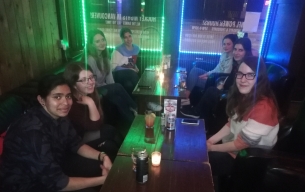 After the Yagger’s we continued the night at, you could say our regular after party place, The Yale. Everyone was hyped about the Bull that you can ride there. Too bad for us the bull was not working last night, so we had to manage without it, and that’s exactly what we did. Once again we surrounded the pool table and had some games against each other. It is a good practise since we are playing pool pretty much every week al though I feel like I’ve just became worst every single week. Maybe some day I’ll be a pro too.

Thanks for everyone who showed up and thanks for a great night!