Hello Monday, my old friend. The weekend is over again and the serious working life is back on my radar. And because I don’t feel quite ready yet to face all this work ahead of me, I want to take a stroll down memory lane with you about my weekend. Ready? Then let’s do this.

First stop on Friday evening for drinks: Darby’s. Second stop for some more beers: The Bourbon. When we strengthened ourselves with enough drinks, we headed to the Roxy, where a live band was playing and people were dancing and singing along. We joined this fun until the club was closing. 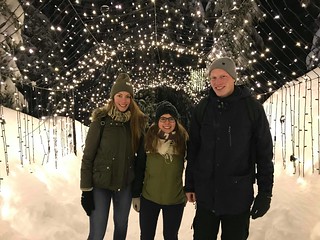 On Saturday, it was time to go to Grouse Mountain. There, the ’24 hours of winter’ event was taking place and we decided to be part of this. It was AMAZING. We did a snowshoeing tour with S’mores and apple cider next to a cozy campfire, took a sleigh ride and enjoyed the beautiful view over Vancouver that Grouse Mountain was offering us. We had so much fun, we stayed at the après-ski party until 1.30am before we headed home to our warm beds.

Sunday was my well-deserved lazy day. I took my time to sleep in, do groceries, wash my clothes and watch series. The fact that my house lost its electricity for three hours in the evening did not affect my relaxed mood at all.

Have a good start into the week and I will see you all on Wednesday for our PuB NiGHT at 131 Water!

Aaaand the countdown is on: the weekend is just a few hours away! Nothing planned yet? There is a lot going on the next two days, so we have here a collection of ideas for you.

On Saturday, we get the chance to spend a night on the mountain. Grouse Mountain is hosting the event ‘24 hours of winter’ with many fun snow activities.

You can ski or snowboard the entire night under the floodlight installed near the slopes. As we already skied last weekend, we will try something different this time! Let’s rent a pair of snowshoes and walk around the Blue Grouse Lake where stunning light installations guide us the way through the night. Need more action? Then we can rent a sled and slide down the slopes in the dark. You can check out all the activities offered here. After all these activities in the snow, it will be time to warm up again. Dinner is waiting for us in one of the many cafes, bars and restaurants on the mountain. It does not matter if you really had skis under your feet before, but après-ski is always fun! Grab a cold beer or a hot cider and dance to the sounds of a live DJ.

Sounds good? Then meet us at 3.45pm at the skytrain ‘Vancouver City Centre Station’ and we will take a bus to Grouse Mountain. The admission fee for this night is $45. Extra shuttle busses will bring us back to the city centre late at night or early in the morning.

For the ones who have seen enough snow by now, there is a warmer option to do on Sunday. A huge event is happening in Vancouver’s China Town this weekend.

I hope to see some of you this weekend! Let us know if you are joining us to the mountain or the parade, so we make sure we meet each other.

Saturday we went up at Grouse Mountain to experience a winter wonderland, where they celebrated their annual 24 hours of winter. In this weekend Grouse Mountain opened the slopes for 24 hours straight, so if you were up for it, you could go downhill the entire night. Besides skiing and snowboarding for as long as you wanted to, Grouse Mountain also organized other great activities and events. So if you were not a great skier, you could also rent snowshoes and hike on some beautiful trails they offer. Or if you are not a big fan of the snow, you were also able to hit the ice skating rink and show your moves on the ice while a DJ took care of playing some great hits. Besides these fun activities, you were also able to go snow sledding, doing a light walk, go ziplining, do a yoga session, and watch a junior hockey game and many other things!

Many choices, so decisions had to be made. Because I wanted to check out the slopes on Grouse, I went up a bit earlier to do some snowboarding. But later in the evening it became hard to see anything because of the heavy snowing and I decided to quit. So I parked my snowboard and met the rest of the group on the top of the mountain. After renting some snowshoes with one of us looking like a real pro, we started our journey on the light walk. We were totally amazed by all the lights, music and beautiful trails, we looked like real tourists making pictures of every single thing we saw. Unfortunately the trail came to an end after half an hour.

It was time for some food and drinks, while we were still amazed by all the beautiful things we saw earlier. And because it was still quite early in the evening, we decided to move ourselves to the bonfire besides the ice skating rink. Two of us got so inspired by all the people on the ice; they quickly rented some skates and gave it a try.

After some heating up at the bonfire again, the evening came to an end and we took the gondola downhill, where we got a beautiful view over the city. And that was the perfect way to end the evening with.

I am looking forward to see all of you again tomorrow at PuB NiGHT!

Now that it finally stopped snowing, there is no reason to stay inside anymore. This time some of us even got an extra day of weekend, as Monday is Family Day. So get outside and get the most out your extra long weekend!

First of all, there is 24 hours of Winter on Grouse Mountain this weekend. It starts at Saturday and continues till Sunday. During this event you can ski during the day and night together with the INTERNeX family. It will be a totally different experience with skiing for sure! However, there are also a lot of other events such as the Light Walk, snowshoeing and ziplining. Some of us are going to do the Light Walk instead, so if you are not feeling like skiing this weekend, you should definitely join us on the Light Walk.

You don’t feel like seeing any snow after this week? We definitely get that as well! Instead of the 24 hours of Winter, you can also go ice skating at Robson Square for free or $4 if you have to rent some skates. You are able to do this from Friday till Monday. Is ice still too cold for you? Then check out the Second-hand Book Sale at Nikkel National Museum & Cultural Centre in Burnaby between noon and 4 pm.

Have a great weekend and see you on Grouse Mountain!

Yesterday’s PuB NiGHT was at Morrissey Pub. It was great to see all these new faces! Thank you for coming!

Morrissey Pub is a rock bar on Granville. Every day they have a different special and on Wednesday they also have Wings Wednesday like most of the places in Vancouver. On Fridays and Saturdays there is a local DJ playing rock, indie, new wave, Brit Pop and hip hop music. Not the typical pub, right?

A lot of the new candidates came to the PuB NiGHT. It was really great to have a chat with you and to hear about your placement. Besides that, Sebastian had his birthday and

brought cake for us. The pub even arranged candles and plates for us! We sang Happy Birthday for him and then we all started to eat the great cheesecake. The atmosphere at the PuB NiGHT was great and suddenly people even started to sing. We sang as loud as we can and after that we started to talk about the INTERNeX song. Last year the INTERNeX family had claimed a song. We still have not decided on a song yet. If you have any suggestions, let us know! Afterwards we figured out there was a photobooth in the pub and tried to fit 5 people in there. Even though we managed to get everyone in there, only 2 people were visible on the pictures.

See you on Saturday at the 24 hours of winter!