Happy Halloween everyone! Another week has come to an end and I am so excited about everything this new week will bring us. But first I want to tell you about my last weekend:

Since it’s Halloween INTERNeX met up at a bar downtown last Saturday and had a costume contest where the candidates had the chance to win a pitcher or a shot for the best costume. It was hard for us to decide so we all won a shot, haha 😉 It was so cool to see how Vancouver celebrates Halloween. Everyone wore cool costumes and looked like they were in an act or something 😉 We had some drinks and fries to snack on while having a nice time celebrating 🙂

Around 8pm we took the skytrain to Burnaby to experience a Halloween event known as ‘Pumpkins after Dark’. It took place next to a stadium in a big park. The event presented a huge amount of carved pumpkins in which well-known characters glow in the dark, it was like walking through a museum with some music and sound effects that fitted the carvings, some of which were quite spooky! It’s Canada’s award-winning outdoor event with over 6000 hand-carved pumpkins and it was definitely a cool experience. Today is the last chance to see them, so if you missed out, you should go and see it for yourself!

The rest of the weekend I was mostly in the area where I live. I was recommended to go to Main Street because of its shopping and great food, so I decided to go there. I found some second-hand stores along the street. I really love the small, cozy stores and I ended up buying a shirt 😉 If you are into second-hand shopping, please, let me know if you know any other second-hand stores here in Vancouver!

I hope you had a great weekend, I can’t wait to hear all about it on Pub Night this Wednesday 🙂 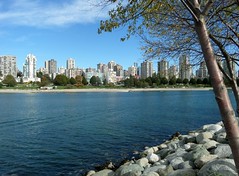 Important information: Due to the fact that too few signed up for the Grouse Mountain hike this event has been cancelled. Quite a few of you Internex members suggested to rent stand up paddle boards on Granville Island instead. Great idea! So on Saturday we’ll be having a great time doing stand up paddling. We’ll be using a bit of time on doing the paperwork, then we’ll be given the equipment needed and 10 minutes  of instruction and off we go. Unfortunately all spaces are now occupied.

– More information about stand up paddling.

Tomorrow, Wednesday, at 7:00pm our pub night will be at the Irish pub Lennox Pub. The pub is situated at 800 Graville Street only 2 mins. walk from Vancouver City Centre Station. 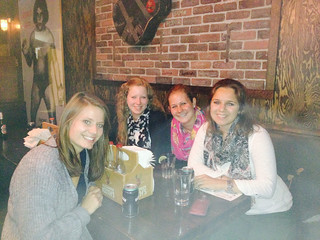 They’re serving a great variety of food ranging from soups and salads to burgers, sandwiches and pasta. And of course they also have typical Irish food. For instance you can get delicious Irish stew. You can also get delicious desserts: for instance a carrot cake or ice cream sandwich. If you want something to drink, the Lennox Pub offers 18 different beers, so there’s plenty to choose from. They’re also serving Budweiser as the daily special for 5.75$. Those of you who didn’t have the chance to go to the Rockies will have chance to hear more about what we did at this fantastic trip.

So come and join us for a fun and cosy evening at the Lennox Pub.

It’s almost Wednesday again, time to come together and enjoy the warm weather with some food and drinks! 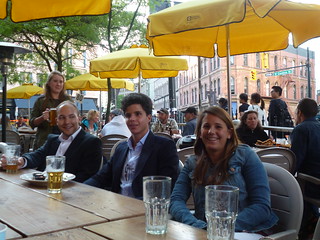 This Wednesday we will meet at the Mill. The Mill is a European bistro at Waterfront and has one of the largest patio in Vancouver. The menu varies from pizza to sandwiches to shared platters such as giant pretzels. They serve local crafted beer such as the Whistler powder mountain lager and Stanley park brewing. Furthermore they offer beer cocktails, Caesars and pitchers of Sangria!

The Mill is located on 1199 West Cordova (@bute str). We will meet at our usual time 7pm. Do not forget to bring a jacket, since it cools down once the sun goes down. Also do not forget that you have till friday 3pm to pay for the awesome Victoria trip! We will announce soon to which recommend pub we will go in Victoria. Also we have a fun activity on Sunday planned for you, you can read more about this here.

We hope to see you all tomorrow at the mill!

Hey guys, how is your weekend going? Here are some of the highlights for this week!

Last Saturday, we went up to Cypress for a day of skiing/snowboarding! It was a lot of fun but also exhausting after a couple of runs! Although we were all at different levels with our skiing/boarding skills, we all waited for each other so that no one would get left behind. Then we watched the fireworks show in the evening as we stood outside the lodge, which looked so pretty against the snowy hill. To finish the day, we stopped at the lookout on the way down the mountain to view the city lights!

Then on Wednesday, we went to the Blarney Stone for our pub night! It was tons of fun while we talked and drank. It was super awesome just getting to know the new members of our group as we all as catching up with every one.

Tomorrow, we will be heading down to Chinatown to watch the Chinese New Year parade! You don’t want to miss this awesome cultural event, because there’s going to be so many fun things to see, eat, and do! If you’re bored and you’re alone at home, you have no excuses but to come out! Check out our Facebook event page!

Enjoy the rest of the weekend!