My very first Pub Night with the INTERNeX family!

Yesterday was my first time at Pub Night and I still can’t believe how many of you INTERNeXers were there. First of all, I want to thank you for such a warm welcome! Obviously I didn’t get the chance to talk to everyone, but I’m pretty sure I will get to know all of you shortly and I can’t wait! When I tried to take a group picture, I realized I had to take two, from each end of the table, because I couldn’t get everyone into one. 😀 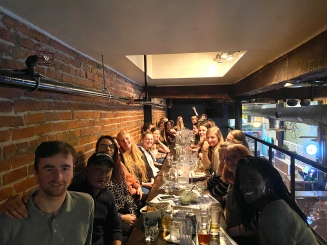 So last night we went to the Beaver. It’s a really nice Pub on Granville Street, which I was told is THE street downtown to go out. And actually I was pretty impressed by how much was going on there on a Wednesday night, because where I come from it’s not common that a street is still so crowded late on a weekday. We started our evening with some food and drinks and because we became more and more people over time the waitresses had to add another table again and again.

Later at night we played bingo. I was really excited because it was a music bingo and I haven’t played it before and some of you couldn’t even wait for it to start. It was so much fun even though I didn’t even know most of the titles of the songs but others did and then we just helped each other. Great team work guys! Three of us even won a price. They got a pitcher and a shot for free. Lucky you! I definitely want to come back to the Beaver because I really want to win too. 🙂

After that a part of the group continued their night and went somewhere else afterwards, but others just headed home since they had to get up early this morning.
So a couple of us could take the same skytrain back home and this ride was a little adventure for itself. We were standing there and all of a sudden the train made an emergency stop. It was actually fun because we fell onto each other kind of like dominos. And even the door opened a little, but fortunately nothing happened and we just stopped for about a minute and then we could continue our ride. We just didn’t expect it at all. 😀
All in all I had a really fun night and I’m even more looking forward to the other Pub Nights and of course our trips on the weekends.
Furthermore, I can’t wait to get to know all of you more and spend lots of time with you guys!

So have a great day and see you soon!

Our weekend was pretty amazing! I don’t know you guys, but we spent a very nice evening in Stanley Park the last Saturday.

As you maybe know, this weekend was the Stanley Park 125th Anniversary. So we decided to go there to take a look. So many activities were organized in the park! Fortunately, the weather was amazing and we could enjoy the beautiful park more than ever.

I went there so many times but I have to say that it was definitely the better one. The entire place was full of people and you could find interesting things to visit everywhere!

The first thing that we saw was the Vintage Car Display just next to Lost Lagoon.  I’ve never been interested in cars, but here in Vancouver I’ve become a fan. There are so many beautiful vintage cars! I’m so jealous about the people who can afford that.

Then we visited the Rose Garden, where we could see a group of children making a Shakespeare show. Then we almost made a walk tour (there were like three different tours at the same time), but finally we decided to go to Beaver Lake.

It’s such a beautiful place. It’s a little bit hidden; so many people usually skip it. But definitely is a must-to-go inside Stanley Park. It’s completely full of vegetation, and surrounded by trees.

Talking about beavers, we continued our route through the park and we found a place with many stuffed animals, in the ecological center. We saw an enormous stuffed beaver called Rob. The guide told us that it was one of the biggest beavers found in Canada. I’m still trying to decide if it was scared o terribly funny.

And that’s was the end of the cultural part of the day. A music festival was organized in Second Beach, so we went there to have fun. It was the best part for me. We could see some people playing Giant Jenga (if you are a Big Bang Theory fan, you must to know about what I’m talking). After enjoy a couple of concerts and eat some food, we decided to go to buy an ice cream and go back home.

And we have some amazing ideas for the upcoming events, so stay tuned! And of course if you want to make a suggestion about what we can do together, leave us a comment below! 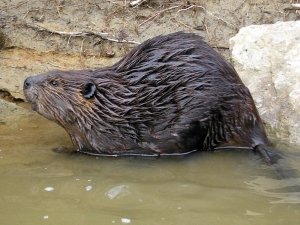 While Germany has a majestic eagle, Denmark a romantic swan and Spain a potent bull, Canada sends a beaver to enter the contest of national animals. Of all the amazing wildlife this country has to offer, it is a cute little beaver that represents Canada. One has to admit that there are fair arguments behind this choice. Back in 1975, when the beaver was announced to be the official national emblem, beaver fur trade had been the reason why a lot of Canada’s wilderness exploration had taken place at all and the animal used to be a symbol of industry in general. Apart from that, beavers are caring parents! Today however, people start talking about a replacement with an animal which represents the splendid beauty of Canada. Oh and there are so many to choose from! What about moose, grizzly or black bear, buffalo and polar bear for example! In my opinion, Canada just needs something more powerful, big and impressive to be symbolized by. What do you guys think about that? Polar bear? Moose? Rather stick to the furry little beaver? Leave a comment and share your opinion!

P.S. One more fun fact for you: A small, tasty, sugar-coated pastry is called a Beaver Tail (sometimes spelled Beavertail, in one word). It can be found mostly in the Ottawa area but you can also get it on top of Grouse Mountain!! Yumm! 🙂

It is of course a shock for everybody when you find out how much money you need in Vancouver. But Canadian money itself bears some interesting fact; take a closer look in your wallet!

Have you ever been asked for a “loonie” and you had nooo idea what it’s supposed to mean?  The first thing a foreigner should learn about the money here is that a $1 coin is called a Loonie, a $2 coin is a Toonie! There is an image of the common loon on the back of the dollar coin, which is a frequent symbol in Canada and the reason for the name “Loonie”. The toonie coin was introduced later and picked up this similar name in colloquial use.

Of course, if you are new to North America, you need to learn the expressions of Penny (1¢), Nickel (5¢), Dime (10¢), and Quarter (25¢). These coins also feature very Canadian things! There is a moose on the 25 cents coin, a beaver on the 5 cents coin, and a maple leaf branch on the penny. By the way, on Friday, May 4th 2012, Canada stopped minting 1 cent coins! No more worthless pennies that make our wallets fat and heavy. Well, the existing ones will still be in circulation, so it will probably take a while. But wait, what about the lucky penny then? Make sure you keep a couple!

More Canadian symbols you will find on the dollar bills. Remember how important hockey is around here? Can’t be missing on the money! The 5 dollar bill features ice hockey-playing children and the inscription says: “The winters of my childhood were long, long seasons. We lived in three places – the school, the church and the skating-rink – but our real life was on the skating-rink.” Canadian money featuring Canadian life!

In case you are wondering who the important people are on the bills and coins: they are usually Canadian Prime Ministers and of course Queen Elizabeth II who still is the Head of State in Canada. Especially the 20 dollar note has her image all over (and you can play “sad queen/happy queen” with it, see below! 🙂 ). This is also the most common bill in Canada. I learned that when I withdrew money for my rent and got $600 in 20 dollar bills… You will hardly get a 50 dollar bill from the cash machine but if you do, take a closer look, the $50 notes are all new and shiny! The new ones were introduced into circulation only on March 26, 2012 and are printed on plastic instead of paper!

Let us know if you ever spotted a 100 dollar bill, they exist!

This Friday night there will be a party at The Beaver Lounge (Samesun Hostel Vancouver) from the Global Work & Travel company. Tracy and I (the PR-girls) are going to this party and we hope that you will join us!