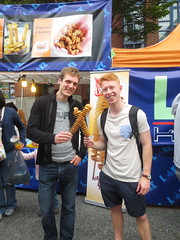 money. The Market takes place form 5 to 10 pm on Friday nights from May 2 to September 26.  So unfortunately next Friday is the last chance for a visit. The Market offers 15 food tracks, 100 vendors and a beer garden.  On the Shipbuilders Stage you can listen to live music until 10 pm and the admission to get in is totally free. Over 80 tents are filled with local products, showcasing BC’s artisans, bakers and farmers. The location of the market makes this the perfect destination to relax at the Pier, catch nice views over the city, eat and be entertained.
The North Vancouver Night Market is placed just east of the Lonsdale Quay Seabus terminal.

If you’re really really hungry, it’s time to go to the RIO. It’s a Brazilian Steak House and you can get there a real Brazilian BBQ with all you can eat for only $15. They offers a great variety of different kinds of meat, such as Beef, Lamb, Chicken, Pork and Fish. You can eat as much as you can. You can get the side dishes from a great buffet with salad, french fries and different other Brazilian delicacies, which you’re welcome to serve yourself as much as you please.
Rio is located Denman Street.

Hope all of you had a great weekend, enjoy the rest of your Sunday and safe some money.

Yesterday’s Pot luck at the INTERNeX Staff House was a huge success!  A Pot Luck Party consists of everyone preparing a dish and bringing it with them.  Because there are many people living in the house, this meant that the kitchen was very busy all day with people preparing their dish.

We arranged the dining room with one long table so everybody could sit together. Because we started out a bit later than planned, everybody was very hungry. As soon as the meals were put on the table, everyone started eating!

You would have thought the house was a five star restaurant. Each dish was amazing! In total there were about 12 to choose from. The homemade Goulash in particular was a huge hit with everyone. Goulash is a Hungarian stew with beef, onions, vegetables, spices and paprika powder. Another dish everyone couldn’t wait to try was the camel and kangaroo meat. Some of the other dishes that were prepared were: spaghetti with meat sauce, pasta salad, roasted potatoes with rosemary and Frittata – an egg-based dish with ingredients such as cheese, spinach, and vegetables.

In addition to all of these wonderful dishes, we also had people who cooked something popular to their country. There was paella from Spain and a German dish called Kaese Spatzle, which is similar to Canadian macaroni and cheese. 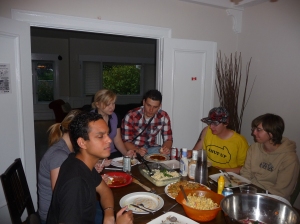 Even though everyone was pretty full from all the delicious meals, no one wanted to miss out on dessert. With desserts such as red fruit crumble and pancakes, everyone could really enjoy themselves. But perhaps the biggest hit of the evening was the homemade chocolate chip ice cream! For the people who wanted a healthier dessert there was also a delicious homemade fruit salad.

It was the first time that we organized a Pot Luck but I certainly hope it won’t be the last one! The evening was filled with fun conversation and good food!  We got to know some new people, which is always good.  Of course we made lots of pictures during the evening. Click here to check out the pictures!

Missed out on the Potluck?  Not to worry, INTERNeX organizes lots of events were you can meet new people. On Thursday June 10th we will be holding a PuB NiGHT at the Blarney Stone. Hope to see you there!