This week was a busy and great week with all the Scandinavians in Vancouver. They were here for only 3 days; right now they are heading to their work in a ski resort. Most of them arrived on Tuesday evening and already met each other at the airport and went straight to their hostel.

On Wednesday we had a long day full with orientations. We picked them up at 8 AM, went to the SIN office and after that to the bank to get them a bank account. When all of that was sorted out we walked to the INTERNeX office and ate pizza. After the lunch break we did the INTERNeX orientation, sorted them out for PhoneBox monthly plans and gave them an introduction about TaxBack. Finally all parts of the orientation were done and we went to the Bismarck Bar for a PuB NiGHT where the other candidates from INTERNeX also came along to enjoy a great PuB NiGHT.

On Thursday we did a Stanley Park Tour which was a long walk, but lots of fun. We first walked to the Waterfront, from there 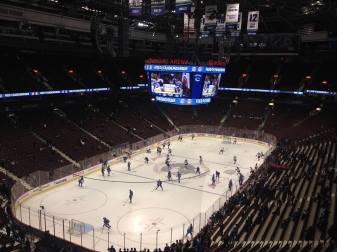 on we walked to Stanley Park where we started of with seeing the Totem Poles, afterwards we walked into the actual Stanley Park. We saw a lot of beautiful things, a really big tree where we could stand in and the Lost Lagoon. We also saw squirrels and even a raccoon!! Then it was already the end of the tour and went back to the hostel to get ready for the Canucks game. We gathered around 6 PM at the INTERNeX office to get the tickets and went to see the game. The Canucks lost, but it was still a great experience to see a hockey game!

On Friday we planned another PuB NiGHT at Blarney Stone to end the great time with the Scandinavian candidates before they leave to the ski resort. We had lots of fun!

We hope you all will have a great time working at the ski resort!!