Yesterday’s PuB NiGHT was at Central City Brewpub. It was amazing to see so many different faces. Thank you all for coming!

Central city brewpub is one of the two brewpubs of the Central City brewery in Canada. It is the only one in Vancouver. The pub has many different beers; local, imported and of course their own brand. Their local beers rotate during different seasons. By changing the beers, they give you the opportunity to try out as many beers as possible. Besides beers, they also make spirits such as gin and vodka and they have their own brand of cider.

The pub arranged a nice and cosy spot for us in the back. It was a very big space, but most people just squeezed in together. We started off talking about a road trip that some of you are planning. It was really great to hear about your plans and to get inspired by them. After that we got the chance to get to know each other even better. The atmosphere in the pub was really relaxed and open. Even though there were some new faces among us, we made sure that they felt welcome with us like we always do in our INTERNeX family.

I had a great evening and I hope you all did too! See you tonight at the Canucks game or next week at PuB NiGHT!

Hands up if you love beer!

You may have noticed that Vancouverites love their beers and that Vancity is packed with small local breweries. So, what better way is there to get a little taste of the city than a BREWERY CRAWL?!

This Saturday, August 8, we will be taking you around the heart of East Van to visit some beer and spirit breweries, get an insight into their brewing processes and their history – but most importantly to try their very own specialties!

Here’s what we’ll do:

We will meet up at 15.00 at Powell Street and Commercial Drive. From here all breweries are easily reachable by foot. For now the plan is to visit six breweries, with an optional seventh.

The whole crawl will last until about 22.00, so, please, have a good lunch! (Eggs and bacon always work well before drinking 😀 (and also after))

What will it cost you? Prices for tasting vary, but you can expect most of them to range between 7 and 10 dollars per tasting. For your own convenience, please make sure to bring some cash.

For now, we are very excited and hope to see all you beer lovers on Saturday! 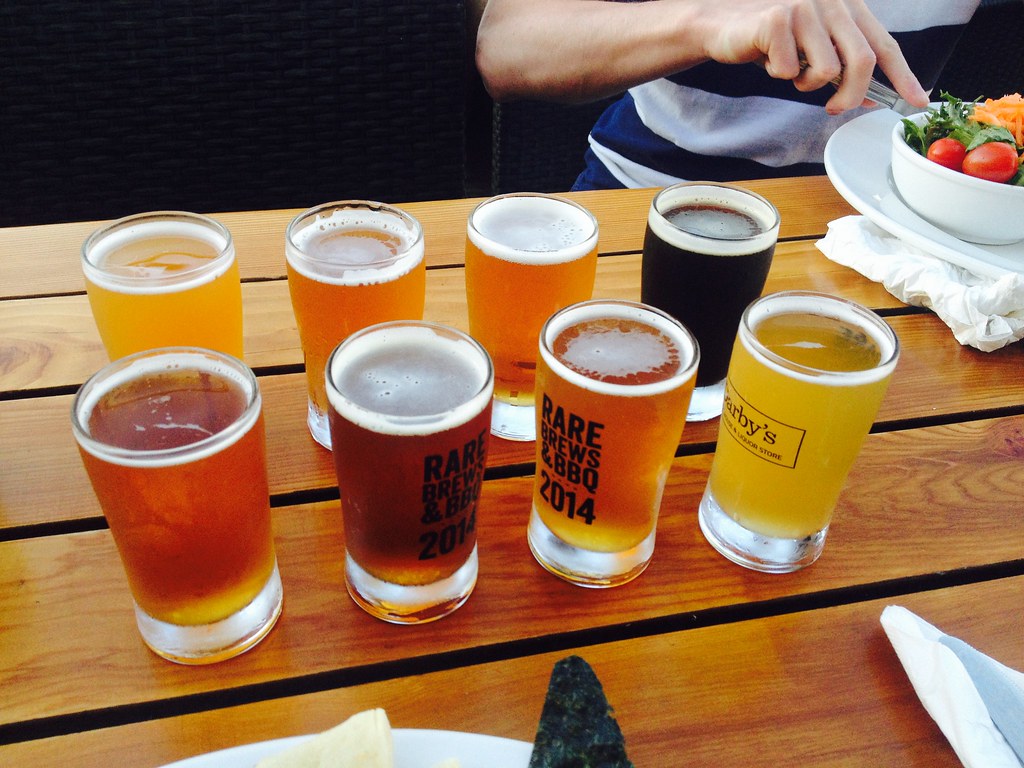 It’s almost time to visit the brewery on Granville Island, during this tour you will learn about the Granville Island beer and you get to taste three different beers! If you want to join this tour, which you want, make sure to bring $9.75 tonight to the Pub Night so I can make a reservation for us. On Thursday I will let you know, when and where we will exactly meet.

Here you find more information about the event, and we will meet today at 7.00pm a the Hastings Warehouse for our weekly Pub Night.

Hope to see you tonight and on Saturday for the tour!

Yesterday, we went to Steamworks for our weekly pub night! It was great because so many people came out (especially some who never have before). I guess they finally decided to join the dark side. But I’m sure it was also because of the Rockies trip! We were all so excited that we couldn’t stop talking about it. We discussed what to pack, what to bring, and how much were are going to enjoy the beautiful weather this weekend.

Life is so much better when you go out to drink during the week, isn’t it? Just wait until the Summer finally starts rolling in…with hot weather and gorgeous sunsets in Vancouver, you’ll be dying to come out to our pub nights every day!

Actually, there is another reason why I love our weekly pub nights. You get to know everyone a lot better at these events. The more time you share with that person, the more you’ll know about them.  These nights are for  personal stories, laughing together at funny jokes, and sharing great memories. It’s always a good time at INTERNeX pub nights and I also get learn so much about every one.  Who doesn’t want to be around these bunch of lovely people?

Thank you all for coming 😉

Tomorrow, we will be gathering at the Steamworks! This place is full of history and is definitely a one of a kind pub. It started running way back in 1995 when the owners discovered that the building had a rare steam heat system. After much experimenting, they had created an original steam generated brewery! The ONLY one in Canada. Come out tomorrow night and try their Cascadia Cream Ale! It is brewed with English Maris Otter Malt, Cascade & Amarillo Hops grown in the Northwest.  It is Golden in color with a rich biscuity malt backbone balanced by a bright, fruity, citrus hop aroma.  Sound good? How about Saison -Belgian Farmhouse Ale brewed with German Pilsner and Wheat malts, finished with Styrian and First Gold hops? And for us girls, Bellinis are on special tomorrow for just $5.99! What a great deal.

Join us friends and let us drink away before ascending into the Canadian Rocky Mountains on the weekend! If you have any questions or concerns, find me tomorrow or message me!

Where: Steamworks, 375 Water Street, Vancouver, BC

Last week we learnt a little bit about the history of Granville Island, but let’s be a little more practical and explore what you can actually do there if you visit today.

Granville Island is a must visit place if you are in Vancouver. It usually the place to be when it’s hot and summer, but I don’t see why we can’t go now! Let me tell you a list of reasons why…

Basically, Granville Island is a great way to get out of the city when you need a break. Here’s a hint for the gentlemen: it’s the perfect place for a date! Sigh, if only I had a date…

Canada is the #19 beer drinking country in the world with an average consumption of 68.3 liters a year per person (Germany is #3 with 115.8 liters!).  I don’t know about you but I had always wondered what the difference between ale and lager was until I finally looked it up. In this blog post I would like to share my amazing knowledge with you guys. 🙂

The brewing processes of these two major kinds of beer differ largely from each other. Especially the yeast fermentation is crucial for the taste of the final product.  Lager yeast ferments at cold temperatures and more aggressively, which means that it produces alcohol faster and leaves less sweetness behind. Ales, on the other hand, need higher temperatures and fermentation takes longer. After that, lagers are aged for a couple of months (this makes them cleaner and clearer), while ales only age for no more than a few weeks. Although both are beer, the two are as different as red and white wines. Lagers are clean, refreshing beers with typically light aroma and flavor. They are invariably served cold and can pair easily with a wide variety of food. Ales are complex, flavorful beers. Many are served closer to room temperature and contain rich aroma and flavor.

Okay, this was a super simplified version but I hope it gives you an idea and shows how sophisticated beer drinking can be if you put it the right way. Alright but let’s stop the theorising here and rather drink them beers before they get warm!

What’s your favourite beer brand? I guess it’s not from Canada, is it? Feel free to comment!

P.S. I hope you didn’t read this and fight a massive hangover from last night at the same time! 😉