My name is Amiel and I’m taking part in INTERNeX’ Practicum Program as a practicum student at INTERNeX. Wow, that almost sounded like a tongue twister! 😀

Alright, why am I here writing this blogpost and introducing myself? What I want to do today is tell you a little about INTERNeX from my perspective with the topics of: Who are they? And what do they do?

First, something about myself. I’m a German university student, in my final year before completing my Bachelor’s degree in International Business Administration. Here in Vancouver, I’m currently about half way through my 4 month practicum working as a PR Coordinator on the one side but also doing Social Media Marketing on the other. I’ve already learned so much and had extremely fun experiences! Time really flies and there’s always much too little of it.

Now, who is INTERNeX?
The company was founded by Timothy Wells in 1998. In a nutshell, it’s an organization that gives you the opportunity to explore the world by helping you live and work in a foreign country. However, I believe it is so much more. INTERNeX is a global community of people eager to meet and learn about new places, people and their cultures around the world. Besides providing their services to the candidates they integrate all of them in weekly and monthly social activities, making it feel like you’re hanging out with a bunch of friends. It’s really incredible and I haven’t met or even heard of any other organization that does the same for its participants. 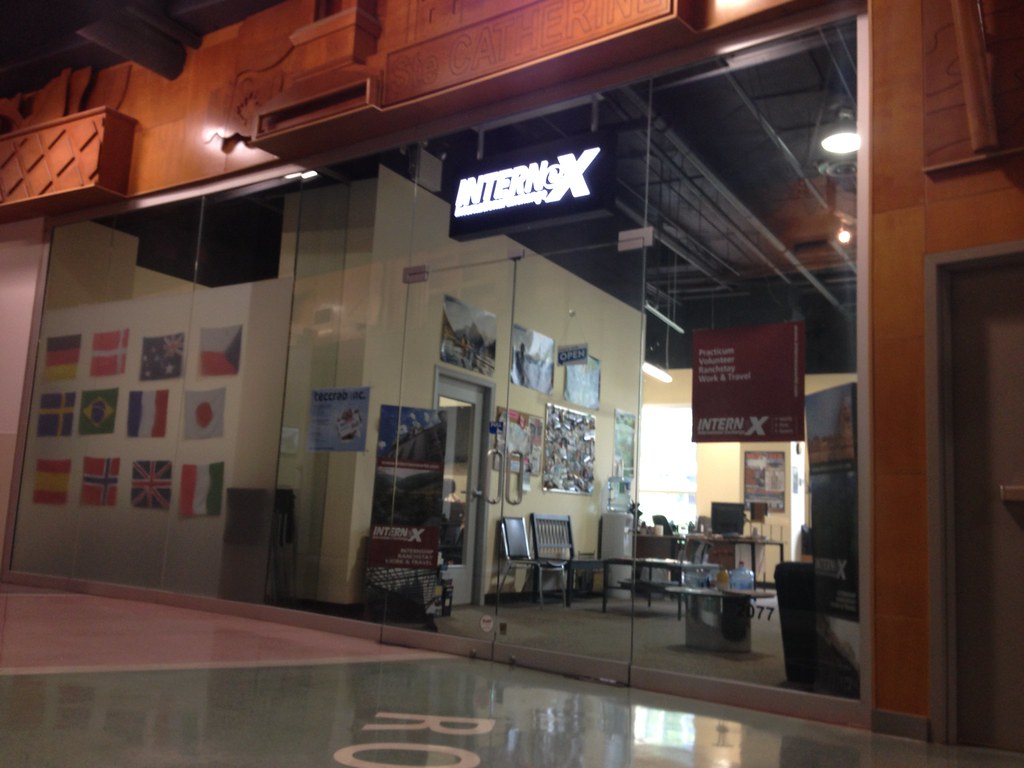 So, what exactly does INTERNeX do?
There are three main programs: Ranch Stay, Hospitality and the Practicum Program. They also give you the possibility to take part in a Volunteering Program through Fronteering (check out their website at: www.fronteering.com). INTERNeX has a close and lifelong relationship with them. In other words a partnership.
Through the help of these programs participants who want to gain practical experience are able to receive placements well-suited to their needs. The mission is to promote personal success and assist the candidates in achieving their goals while nurturing cultural understanding in this multi-cultural community.

Well, that was all for today! This week was only an introduction into the world of INTERNeX. In case you want to learn more, check out my blogposts over the upcoming weeks in which I’ll be going into more detail about the programs INTERNeX provides OR just visit the homepage at: www.internexworld.com

As many of you know, INTERNeX does not offer only one program, but has a wide range you can choose from, before you go abroad and actually join us. As winter season is approaching fast, more and more participants of our hospitality program will come to Vancouver. However, not many of them will stay here for long. Why that is so and what they do, you can read here today:

Travel and Tourism is one of the world’s fastest growing business sectors and the Hospitality industry plays an important role in sustaining the world of travel. It’s an exciting field to be involved with for a number of reasons, especially providing an opportunity to meet and work with fascinating people from all over the globe, to share stories and learn from them about the world they live in and how it compares to your own. This ever growing industry tends to attract those who consider themselves the outgoing type. Motivated people, who truly enjoy the experience of human interaction, are the backbone of the hospitality industry. The kind of person who’s comfortable socializing and enjoys the company of genuine people. This type of character is very desirable in the world of Hospitality.
This program gives participants the chance to gain experience in world class resort communities, especially during the winter season as for example ski resorts need extra help with the additional crowd of tourists. Placement opportunities are with hotels, resorts or associated companies in a tourism communities and cities. Positions and locations of placement opportunities are based on previous education, experience, English level, ability to stay a full season or longer, as well as general attitude and of course what is available at the time of your application. Hospitality produces daily experiences like no other work environment. One can find themselves preparing a banquet for a high end conference in the morning, handling the luggage of a professional sports team by lunch and be greeting members of Royalty later that day. There’s no telling which direction this exciting field will have you moving on any given day. INTERNeX will assist you with all you need to secure your placement including in depth industry specific consultations, orientation to living and working in the country and a placement specific orientation when you have secured your placement. The participants of this program often only stay in Vancouver for a few days and then move on to one of the many resorts and hotels spread throughout Canada. So once they arrive here this winter, you guys should use the time to get to know them and make a few new friends fast!

Find out more details about the hospitality program on our website…

If you had of told me a year ago that I would be coming to Vancouver and doing an Internship I would’ve called you crazy! I’d always planned on doing some traveling after completed my studies in March, but North America definitely wasn’t on my radar.  A holiday before beginning my working career seemed like the perfect way to end a long six year stint at University. After a bit of planning, in the back of my mind I had the idea that I could also try and get some work experience whilst overseas, something flashy for the resume and hopefully a way to kickstart my career. After brainstorming some possible locations, I read a lot about Vancouver as it is ranked as one of the most livable cities in the world, and as a Graduate Architect I was excited by the cities significant urban renewal projects and their ambitious goal of becoming the greenest city in the world by 2020.

After making the decision to travel to Canada, I came across INTERNeX’s website by chance and got in contact with them. The process was really easy and straight forward, and thanks to their large network of contacts I was promptly offered the opportunity to complete an internship in a downtown architecture office, a partnership between three small firms with a variety of experiences between its members. Two weeks in and I am definitely not disappointed, I have already learnt so much and know that there is still plenty to come.

The timing was perfect as the office is currently in the schematic design phase (the beginning, the most exciting part) of a community, administration and health centre for a first nations band in northern British Columbia. I am incredibly grateful to be involved in such an interesting indigenous project that is so different than anything I have already experienced at home. Tasks I have completed so far include making study models, exploring different possibilities for the potential building forms, and assisting the Architects with other small tasks. I have also had the opportunity to sit in on many fascinating meetings with different project consultants such as engineers and landscape architects. Some days my head feels like it will explode from trying to absorb so much information!

Vancouver is such a beautiful city and I am so happy with my decision to come here. There is so much to do and being here for an extended period whilst completing my internship will allow me plenty of opportunities to see all this amazing city has to offer. So far I have managed to explore the stunning Stanley Park and many of the unique downtown neighborhoods, Gastown where I’m working is super trendy and definitely a favorite. I’ve met some fantastic people from all over the world and taken part in some great activities, many of which I never would have expected, such as a hilarious Canadian tuxedo party (because we all secretly love denim on denim). Leaving Vancouver will definitely be hard, and it’s looking increasingly likely that it won’t happen till well after originally planned. If you’re considering coming here for an internship – do it! You definitely won’t regret it.

We are used to research all information we want and need online; we expect companies to have a comprehensible website; we want to follow our favorite shops and bars on social networks. Online presence is a significant part of business for all companies today. teccrab online service inc. knows how the modern business world works and offers support in the most recent developments of online media marketing.

Their services start with Website Development for companies and their products. A website is nowadays the face of a company and needs to be well-developed and professional. That is where teccrab online service inc. offers expert advice from various fields including marketing, software developing, web and print design as well as Public Relations.

Search engines are an everyday tool for the most people but have you ever thought about the effort behind the search results you get? With the internet becoming the main business platform for today’s industries, teccrab online service inc. supports them in areas such as Search Engine Optimization (SEO), Search engine marketing (SEM), Social Media Marketing as well as Online Reputation Management.

Additionally, teccrab’s Public Relations Service helps their clients to professionally interact with partners and customers, enter new markets and promote the company and their product. However, offline contact and publicity is as important as the online part of business. A professional Public Relations team will assist in promoting events to attract and meet partners and customers.

INTERNeX International Exchange is grateful for the support of teccrab online service inc.!

The Event – Team Spirit At Its Very Best

The Festival, which started in 1989, entered the international arena in 1993. From the humble beginning of only 27 teams participating in the first festival back in 1989, it has evolved to a much bigger operation over the past two decades.

Organized by the Toronto Chinese Business Association and the Toronto International Dragon Boat Race Festival, the Festival in 2010 will once again expect 180 to 200 teams with 5,000 athletes. Paddlers of different backgrounds from all over the world will take part in the ancient Chinese tradition and friendly competition.

In 2009, the Festival registered 8 teams of youth with physical and developmental challenges. The Festival was also graced by the cancer survivor terms from the Canadian Breast Cancer Foundation – Ontario Region, fundraising beneficiary of the Festival. After all, it’s not always about winning the cup. The team spirit, the message of hope and inclusiveness prevails throughout the Festival!

Once again this year, the Festival will welcome teams from all provinces across Canada, from the U.S., the Caribbean Islands, Europe and Asia.

In 2010, as the Festival celebrates its 22nd year, it promises to continue to be one of the most exciting summer events in Canada. It will juxtapose culture, water sport, exotic food with multi-cultural performances. In 2009, attendance at the Toronto International Dragon Boat Race Festival reached the 120,000 mark to make it one of the most popular summer festivals in Toronto.

Furthermore, the Festival values social responsibilities and has in the past raised funds for charities such as the Heart and Stroke Foundation, Breast Cancer Foundation and the SickKids Foundation.

The two most established Dragon Boat Race Festivals in Canada – Toronto and Vancouver – spearheaded the Dragon Boat Council of Canada, the national dragon boat organizing body in Canada. The mission of the Council is to work together to develop criteria and processes to select national dragon boat champions to represent Canada in International and World Championships.

Hope everyone in Toronto has a  great weekend!