Last but not least the fourth quarter of 2016. I hope you guys had as much fun as I had looking back on all the things we did!

October started of with a trip to the Vancouver Aquarium and a great Thanksgiving dinner at Ten Ten Tapas. We also had a lot of PuB NiGHTS organized. And a special night for Halloween.

The weekend trip of October was a trip to the Rocky Mountains. During this trip we went to the National Parks Jasper and Banff. We also went to Lake Louise, Mount Robson and Colombia Ice Field. We also enjoyed a night out in Banff and enjoyed a night at our Mountain View Cabins with a BBQ party around the bonfire. It was a great trip!

Also that weekend we went to Grouse Mountain for the ones that stayed in Vancouver. We did a great hike on the Grouse Grind and enjoyed the amazing view.

In November we started of with great PuB NiGHTs. We also went to CandyTown in November. It was raining a lot but still lots of fun to enjoy the Christmas spirit already!

In the last week of November a big group of Scandinavians were coming for a few days. The first day was full with orientations and of course a PuB NiGHT. The second day a Stanley Park Tour was planned. And on the last night we had a PuB NiGHT planned in the Blarney Stone. It was a great week!

December was filled with PuB NiGHTs. We had lots of fun at the Met and the Bimini.

On the third Wednesday of December we had a Christmas Party. We first went out for dinner at the Spaghetti Factory, which was great! When we all finished our dinner, we started with Secret Santa, which was lots of fun too! After the dinner and Secret Santa some of us went to the Met to end the night with some karaoke!

A big thank you to Sara, Andreas and Janel for organizing the PuB NiGHTS, events and trips in these months!

We hope you all will have a great New Years Eve and an even greater 2017!

My very first pub night was a success! Thank you all for showing up! I had a great time meeting all of you! Yesterday’s pub night was organized at the Tap & Barrel in the Olympic Village.

So many people came that we even had to take more tables to fit everybody. Everyone was nicely chatting with each other and meeting the new INTERNeX people, including me.

The deal on the beer also was a good one! I saw a lot of people enjoying their Mainstreet.

Later in the night when everyone began to go home or to another bar. I also finally went home to get a good night of sleep, hopefully my jetlag will be over next PuB NiGHT and then I will show you how Dutch people really go out!

On Saturday there will be CandyTown in Yaletown. It’s a Christmas market with lots to do! CandyTown themed cocktails, horse-drawn carriage rides, ice sculptures, food trucks and a ‘All I Want for Christmas’ gift market to pick up gifts for the holidays!

Next week’s pub night will be a welcoming night for the 16 Scandinavian people which are coming here to Vancouver! It will be at the Bismarck Bar, to have enough space to fit all of you!

More info on CandyTown and the next Pub Night will be at the events on our Facebook page!

Thanks for last night guys and I hope to see you Saturday or next week!

My weekend was pretty cool! Saturday we went to CandyTown organized by the Yaletown Business Improvement Association.

It was a pretty small Christmas Market with local vendors where we got some inspiration about what to buy our loved ones for Christmas.

Yesterday a bunch of INTERNeX people went to Seattle for a sightseeing trip hosted by WestTrek. Once again I have to thank you for the awesome organization. Our tour guide did a great job and we could feel special since the weather was amazing too. And as you might know the rain probability in Seattle is even higher than in Vancouver, which is really unbelievable.

Furthermore all the border process went in a perfect way! We all could enter in less than hour and all of us came back even faster because we didn’t have any waiting time at all!! Anyways, let’s talk about what we have seen and experienced:

Our first stop in Seattle was probably the most popular attraction: the Space Needle. It’s a famous landmark of the Pacific Northwest and an icon for Seattle. It is built to withstand winds of up to 200 miles per hour (89m/s) and earthquakes.

Afterwards we headed to downtown Seattle where our guide showed us the Pike Place Market, which is the oldest farmer market in the States. You can find almost every kind of vegetables and fruits there. Other than that you can buy oils, gifts, flowers, vintage clothing and of course the super fresh fish. We almost had three hours to explore Seattle on ourselves. First of all we went to a fish restaurant and tried the super fresh fish because we were starving! It was really delicious! After lunch we went shopping, walked around in t

he streets of Seattle and took some pictures. The streets were already decorated for the Christmas holidays and in front of Nordstrom there just set up a big Christmas tree. Lee, our tour guide, asked us to make comparisons between the behavior of Americans and Canadians. Much to our surprise we found out that the folks in Seattle are pretty much the same: friendly, helpful, open, honest, interested, cosmopolitan, …

Visiting Seattle during your stay in Vancouver is a must-do!

You can check out our flickr profile for more pictures. 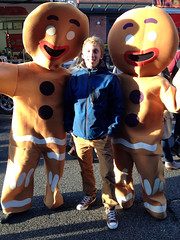 Last Saturday we went to the Christmas market CandyTown in Yaletown. We met up in in front of Jugo Juice not far away from the market. As we walked through the market, we quickly realized that we weren’t the only ones who had chosen to spend a bit of time at this Christmas market in the nice and sunny weather.

At the market you could find waffles, chocolate, cotton candy and much more. For sure it was a good place for the different stores represented at the market to do some advertising for 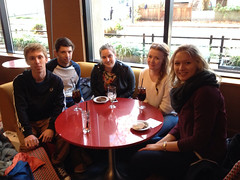 their products. A lot of people were lined up in front of the many food and candy stalls but we were a bit too hungry to wait for that long. So after taking a few funny pictures we went of to a little cafe not far away from the market.

Thanks to you guys who joined for this activity on a nice and sunny day. 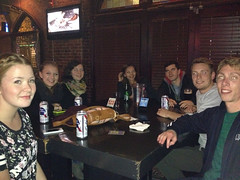 Thanks for another cool pub night yesterday at the Metropole. It was really good to see you guys again. And it was great to see some “new faces” as well. The food was really cheap, and you could get a burger and a beer for just $6.49! Every Wednesday is a karaoke night at the Metropole, so we had lots of fun listening to some very entertaining singers. And let’s just be honest, not all the karaoke singers were good. But we’ve got to give them credit… they really tr 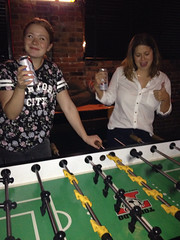 And of course The Met also have their own Foosball table that we just had to try. So a couple of us played a couple of let’s say very intense matches. Great fun!

Once again thanks for a greet night, and don’t forget our little trip to the CandyTown in Yaletown this Saturday at 12pm. This is one of the only big Christmas markets in Vancouver with free entrance. Would be nice to see a lot of you there. Click here to read more about the market and to sign up for the event.