On Sunday INTERNeX went to the Vancouver Pride parade. Thank you for joining, we had a blast!

We got together at 12pm to ensure a spot along the parade. Unfortunately it was already really crowded, so we didn’t get the best spot in the beginning. Still we were able to enjoy the parade and saw some spectacular acts along the way! Someone even walked on his hands for a few minutes and closed it off with a backflip. It was really good to see everybody so happy and being themselves.

The parade went on way longer then we thought and people in front of us started to leave, so we suddenly had great spots. The festivity lasted about two hours full of joy. After standing and celebrating for so long our stomaches were empty, so we decided to have a nice lunch. Because it was really busy everywhere, they let us wait a while for our food, but it was all worth it in the end since the food was great!

Everybody felt good again, so it was time to party on. We headed to Sunset Beach for the

festival and went over Davie street in between to see what was going on there. After taking a swing on a cloudy swing set we arrived at Sunset Beach, which looked amazing! There were many vendors and two stages. After getting some rainbow paint on our cheeks we decided to go to the stage in the beer garden. It was a blast dancing there with everybody, so it was very unfortunate when we found out the festival was already over at 6pm.

I had a very happy Sunday and I hope you all did too! I hope to see you all next PuB NiGHT since it is mine and Danielle’s last one! 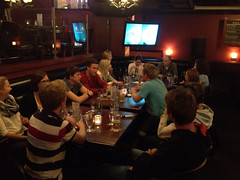 Yesterday we had another great Pub Night at the 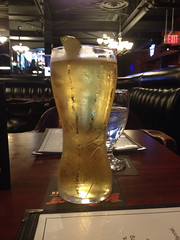 UpperDeck.
It was pretty awesome because 15 people were able to join us and we were lucky with the big table, so everyone had enough space to sit.
The food was okay but especially the Cider was pretty good.
Some of us ordered Bruschetta and got something, which looked like a Pizza with tomatoes. As we recognized later on the bill it was Pizza – Pizza Prosciutto. Bruschetta and Prosciutto seem to be similar in the pronunciation for the waitress. 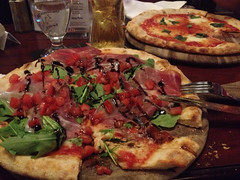 However we had a lot of fun and Henrik was able to learn some German words because of the many German guys. On the other way around the German guys learnt some Japanese words.

I hope to see so many faces at the next Pub Night again.

Don’t forget to join our visit to the Queen Elizabeth Park on Saturday. It’s going to be awesome.

For everyone who doesn’t join us, have a nice rest of the week and a great weekend. 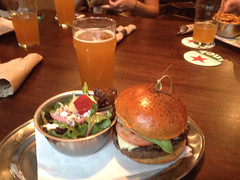 This Wednesday at 7pm we’ll have our next great pub night. This time it will be at UpperDeck. They’re serving a great variety of food ranging from soups and salads to burgers, pizza and pasta.They have a wide selection of local Craft Beers on Tap and in bottles. If you can’t decide what to try you can get 4 craft beers for only $8.00. And of course there are some specials. You’ll be able to get the Stanley Park Lager for $4, House Wine for $5 and Chicken Wings for the half price.

The Pub is located in the heart of Davie Village. Only a few minutes walk from English Bay.It’s situated at 1239 Davie Street next to the bus station Davie St FS Bute St. You can get there with the bus number 6.
Click here to view location.
If you didn’t have the chance to join our laser tag activity last Saturday you’ll also have the opportunity to hear why it was so exhausting to play it.

This is my(Sophie) welcome Pub Night, so I hopefully see you tomorrow.
Join the Facebook event here.

This week I would like to introduce the Basil Pasta Bar! At this place you can create your own delicious pasta. choose your favorite pasta, vegetables, meat/fish, sauce, herbs, and cheese. or you can choose one of the standard pastas that they offer. within no time your pasta is ready and you can enjoy your meal.  you can combine your pasta with some bread, a nice soup, or a salad. This is a great place when you want to eat cheap, good, and you do not want to wait too long for your food. There is also an option to take away your food!

I went to this place already so many times, I really like going there! I hope you guys will like this place as well 🙂

Do you have good tips on how to Safe money in the city of Vancouver? Let us know by leaving a comment below!

This week I would like to introduce a very cheap Greek Restaurant located in the heart of Davie Streetd, namely Stepho’s Greek Taverna, it is very easy to find. This is the place to be when you are looking for cheap and good Greek food. If you wanna go here then you have to be prepared for a line up, since many people know this amazing restaurant. If you do not want to wait, then you should go there around 3pm, or you can take away your food.

I would like to give you a few examples of what this place offers:

Do you have tips on how to save money in the city of Vancouver? Please let us know, by leaving a comment below!