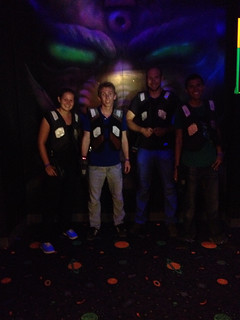 Last Saturday we went for our fabulous laser tag event. We met up at Laserdome i North Vancouver where we were going to play our laser tag games. A birthday party had just been celebrated before we arrived, so a few kids were still running around having lots of fun. Luckily we avoided all the small kids inside the Laserdome… these kids were way too energetic.

Before entering the playing field/laser dome we were given a wests and plastic guns. We had to hit certain spots on the west in order to get points. And of course we also had to avoid getting hit by the other team. We were only four people playing but it was still great fun! Even though we only played for 30 minutes, we all quickly realized how exhausting it is to play laser tag. You’re almost constantly running around, up and down ramps, and trying to hide in different positions. You’re focus is constantly on finding a new good spot where you can shoot your opponent. After playing in team we tried an all against all match. This was of course even harder because now you really had to keep a constant focus on people shooting you from all kinds of different spots.

Thanks to you guys who joined this cool activity, and looking forward to see more people for our next weekend activity next Saturday where we’ll be going to Queen Elizabeth Park.