Monday morning: I’m crawling to the office. No, it’s not because it’s a burden to be here, but rather because of the activities from the weekend that really overstrained my legs.

Well, let’s start with Friday: Thanks to several incidents, I could finish work early. So, happy-me leaving the office at 3pm thought it would be a great idea to do some workouts. Well, not the greatest idea if “Mother Nature’s Stairmaster” aka the Grouse Grind is scheduled for Sunday. But everybody makes mistakes and at least I didn’t think of it during my easy Netflix and chill evening at home.

Saturday morning, I woke up with a smile on my face because a beach-day promised a great time. Clever-me put on some sunscreen and headed off to Sunset Beach to meet some of you guys. When I arrived, a few of the Vargas-Gang were already enjoying the sun, playing some beach games and just had some easy and fun conversations. It was a really nice and relaxing day, I definitely enjoyed it. Despite burning my back and neck. 😦 At home I tried to bake some small flatbreads. Yes, “tried”. They turned out to be buns rather than flatbread, but oh well. They’re still edible. 😉

Of course, after Saturday, there is Sunday. This day I woke up quite early to watch the FIFA World Cup final. We met at Malone’s to see France conquer Croatia. It was an exciting match. At 11am it was time to meet at Waterfront for our big hike. I was really happy to see so many of you showing up. So, the 13 of us fought our way up to the summit.

It was quite exhausting, but the feeling we had when we arrived at the top was just amazing – not to forget the view, of course! We spend some hours on top of Grouse Mountain, saw some bears, had a good lunch (some schnäcks😂), took amazing pictures and had some fun talks. While waiting for the gondola to take us down, we met Cleo, the resident barn owl from Grouse Mountain. Half an hour plus a Gondola ride later, we all collapsed in the Shuttle-Bus heading to Waterfront Station. It was an exhausting day, but it was totally worth it. Thanks for joining our day trip and I hope to see you all soon!

Don’t forget – we are going to see The Lion King in the OpenAir Cinema at Ceperley Meadow in Stanley Park tomorrow!

It’s the day after Pub Night, sometimes referred to Hangover-Thursday. Yesterday we went to the lovely Irish Pub on Granville and Nelson. We were around 20 INTERNeX people, quite a lot 🙂

Of course we had our usual drinks and food. For those who did not tried the food it is pretty good and the burger which was eaten at the opposite of me, looked delicious. However for the ‘healthy’ ones underneath us the salad is also very good. Besides food and drinks, there was also some 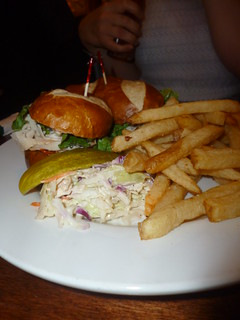 fussball matches going on and of course the usual talk about what’s going on on the weekend. Let’s cross our fingers for the weekend that the sun is coming out and we can enjoy our bike ride through Stanley park!

On Monday the first soccer game for Germany will be played and of course we will be cheering for Germany from Canada. If you want you can join us to watch the game at 9am at Sciue on 800 pender street next to the Pacific Centre. It is a nice Italian bistro sweet menu cart, a breakfast is around $6. You are free to join us.

See you on Saturday!