Weeks of preparation have come to an end! The big night was finally here, all these hours of costume shopping and watching of make-up tutorials truly paid off. We looked stunning, guys! And I just want to make a big shout out to the Blarney Stone. Decorations, drinks, food and the party vibe were on point!

As our night started, we first got some food to be prepared for everything else happening afterwards. Apparently the Poutine is one of the best you can get in town and as we all know definitely a must try! Alongside the food and drinks, everybody was chatting and laughing, having a good time reviewing the highlights of the past week. As we got distracted by the live band starting off with some good hits. Clearly nobody could sit still for a very long time, so we got up and hit the dance floor. The band didn’t just have a great choice of songs, but also a pretty unique interpretation of it, which I loved. Therefore you just had to get up, jump, dance and go wild! Pub and dance-floor were crowded and pretty much everybody within the pub dressed up like crazy. I have never seen such inspiring and funny costumes before. I think my personal favourite  was a guy dressed as a taco.
As is got later, we decided to change the location. And I am pretty sure you can guess, were we headed to?! Right, the Yale Saloon, what else could it be. But to be honest, for me it was the first time there, so I was really excited to see the INTERNeXer’s favourite location myself. And what should I say? –  I was riding that bull. To be fair, not really good, but something tells me everyone else had a little bit more time to practice. So I am trying not to be too hard on myself here. Anyways, I am pretty sure I’ll get some more time to practise and one day I might even beat you guys, who know’s ;-).

Big thank you to everyone who joined and made it a great night to be remembered! Photo and Video material has been provided on Instagram, so go and check it out yourself. This Sunday we will a get the chance to calm down a bit and enjoy the beauty of Granville Island. So I a looking forward to see you around.
And of course, don’t forget about next weeks PuB-Night, taking place at the Cambie Bar & Grill.
Till then,
Cheers,
— Nadja
International Village,
Suite 2077, 2079 – 88 West Pender Street
Vancouver, Canada -V6B 6N9-
Web: http://www.internexcanada.com
Email: pr@internexcanada.com

Thank you all for joining us yesterday for the Halloween Party at Caprice Nightclub! We had so much fun and I hope you did too!

Caprice is a night club located on Granville Street / Entertainment District. It is a big club with two levels and on the ground level two different rooms. Every Friday night they organize International Fridays with all kinds of different music genres and if you’re on the guest list you can get in for free.

This “PuB NiGHT” was of course a little bit different because of Halloween. When I arrived at the club, Granville Street was already packed with a lot of people in all kinds of costumes, for example I met JigSaw and even the clown from IT.

After most people arrived we entered the club and got something to drink. The club was nicely decorated and the music was very good, with genres like R&B and Dance.

I hope that you all enjoyed Halloween and we are looking forward to see you all on Sunday for the Brewery Tour!

Last but not least the fourth quarter of 2016. I hope you guys had as much fun as I had looking back on all the things we did!

October started of with a trip to the Vancouver Aquarium and a great Thanksgiving dinner at Ten Ten Tapas. We also had a lot of PuB NiGHTS organized. And a special night for Halloween.

The weekend trip of October was a trip to the Rocky Mountains. During this trip we went to the National Parks Jasper and Banff. We also went to Lake Louise, Mount Robson and Colombia Ice Field. We also enjoyed a night out in Banff and enjoyed a night at our Mountain View Cabins with a BBQ party around the bonfire. It was a great trip!

Also that weekend we went to Grouse Mountain for the ones that stayed in Vancouver. We did a great hike on the Grouse Grind and enjoyed the amazing view.

In November we started of with great PuB NiGHTs. We also went to CandyTown in November. It was raining a lot but still lots of fun to enjoy the Christmas spirit already!

In the last week of November a big group of Scandinavians were coming for a few days. The first day was full with orientations and of course a PuB NiGHT. The second day a Stanley Park Tour was planned. And on the last night we had a PuB NiGHT planned in the Blarney Stone. It was a great week!

December was filled with PuB NiGHTs. We had lots of fun at the Met and the Bimini.

On the third Wednesday of December we had a Christmas Party. We first went out for dinner at the Spaghetti Factory, which was great! When we all finished our dinner, we started with Secret Santa, which was lots of fun too! After the dinner and Secret Santa some of us went to the Met to end the night with some karaoke!

A big thank you to Sara, Andreas and Janel for organizing the PuB NiGHTS, events and trips in these months!

We hope you all will have a great New Years Eve and an even greater 2017!

Last Saturday was Halloween and nearly everyone went crazy. Actually that’s not surprising; I mean it’s one of the most popular events in North America. You could see many people who were dressed as a Minion. At least just as many wore a Super Mario or Luigi costume. Consequently the costume of my roommate and me perfectly fitted since, as I mentioned in one of my last blog posts, I was dressed as Mario and she was my “brother” Luigi.

For my first real Halloween party in Canada I certainly had big expectations and they were more than fulfilled last Saturday! Actually they were exceeded. Hundreds of people wearing Halloween costumes and went absolutely crazy.

After around 10pm the entire Granville Street was closed for cars. So Granville was just opened for all the party people and therefor the street was really crowded. The line-ups in front of the clubs were quite long. That’s why people partied even on the street.

First we had some difficulties at in the beginning but then we started our crazy night at the Harbour Event Center near BC Place. Shortly after we entered the club the first bus left to take us to our second party location.

We went from party to party with a typical American school bus, which was absolutely amazing. I always wanted to take a bus like that. The atmosphere during the bus ride was incredible since the people turned the bus into a party bus. Probably most of them were already drunk at this time but they didn’t care after all it was Halloween. The bus driver let us off on Granville Street where all the fancy clubs are located.

It was the first time I celebrated Halloween in such a big way and it was a great to be part of it.

Not even two weeks left and Halloween will be here! For this occasion I’ve decided to check out some stores in downtown for the obligatory Halloween costume shopping.

The variety of crazy costumes at the Halloween shops here in North America is just incredible. You really get lost in between all these clothes! Furthermore you are getting so many different impressions that in the end you cannot really make up your mind. I can only speak for myself but my Halloween shopping was absolutely successful. My friend and I will go as Mario & Luigi! I’m pretty sure everyone knows these both characters. They are from the famous video game released in the 80s and it was later re-released for Wii as well.

If you haven’t gotten your costume yet or if you still have no idea what to wear here are some ideas: Witch/Vampire/Zombie, Superhero, Animal, Doctor/Nurse, Batman, Movie Character, Star Wars Character, Political, Pirate or Minion.

For all of you who haven’t found the right Halloween costume yet, you should definitely check out the three shops (Halloween Alley, Boo La La Costumes and Spirit Halloween) in North Vancouver! They have a nice variety of different costumes. You can also find costumes and other Halloween stuff at Shoppers Drug Mart, London Drugs and Rexell.

Hope you will find some scary/funny/crazy/whatever costumes there or somewhere else! 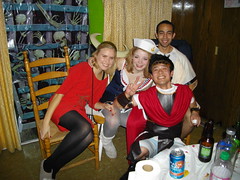 Join us for our Halloween Party at Blarney Stone. Entrance fee is only $10, so there is enough money left for some drinks and fancy costumes. Best way to safe some money and enjoy Halloween at the same time.

What do you think about karaoke?

Enjoy every Thursday karaoke evening at Melone’s for free. It’s super international on Thursday, you can meet people from all over the world. Learn how to dance in Latin America. Oh my gosh, it’s amazing guys. I’ve never seen people moving like thiiiiis!!! 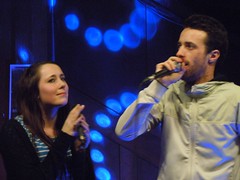 If you want to go out to party for free. This is also possible 🙂
You can get some free tickets for every Wednesday for Caprice Nightclub at our INTERNeX office. But be aware of the time. It’s only for free till 10:30 pm.

Enjoy the rest of your Sunday!! 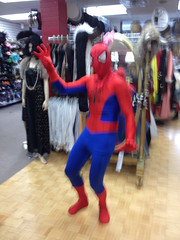 Last Saturday we went to Boo La La Costumes in North Vancouver to do the obligatory Halloween costume shopping. We met outside the store at 3pm. Inside the store was of course all kinds of crazy costumes… you could dress up as a superhero, a celebrity/an idol, a beer mug or even a dart board. There really was almost no limit to what you could wear for Halloween. Even the staff were wearing costumes and were painted in their faces trying to look scary. The staff members were really kind and helped us with any wishes or ideas that we had for our outfits. We had a lot of fun trying out different costumes before finally deciding on what to wear for Halloween. You can have a look at the hilarious pictures here. 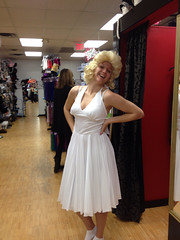 Thanks to all of you who made this Halloween costume shopping awesome! And don’t forget to show off your great costumes for our Halloween party at Blarney Stone on Friday, October 31st. Those of you who didn’t have the chance to participate in our shopping are of course also more than welcome to join the party… The bigger the group the better. You can sign up for the event here. Remember, it’s only 10$ for the entrance, and for sure it’ll be a party like no other!