I bet you were lazier than some of us this weekend, because let me tell you, we took on quite a challenge, but we made it!

Sunday was the day. Equipped with lots of water, snacks and some caffeine we were optimistic to reach our goal: Hiking the Grouse Grind.

I mean, I’ve read about it before, heard from others how hard it was, but really I didn’t believe it. I got proved wrong. It turned out to be one of the more challenging hikes I’ve done so far. Not that I’m a professional, but I thought I’d be fitter. 😀 The hike is about 2.5 kilometres long and has an elevation gain of 800m with a total of 2,830 stairs! That’s pretty tough.

The hardest part for me was the beginning, because you go up and up and up… and there seems to be no end. Then, finally a sign! It tells you that you reached the 1/4 mark. Pretty demotivating to me. But it turns out none of us is a quitter, so we kept going, reached half way and kept going! From that point it was clear, there’s no way back down now.

On our way we saw a lot of people struggling, which made me feel a little better, because I knew I’m not alone. Of course we also saw people passing us with such lightness, but I told myself “they’ve probably done this many times before”. I also think the actual challenge was not the hike itself, but the fact that you want to be faster than others. You try to pass people, or at least not lose sight of them. You try to make it up the mountain in less than the average time of two hours, which makes the hike even harder than it already is.

After seeing the 3/4 mark I felt motivated to reach the top. I could feel I’m in the homestretch and I increased my pace. The feeling of finally reaching the top was incredible. Since the weather was very cloudy, the view was very limited, but at least the air was nice and cool, perfect for a workout like this. After everyone arrived we had some food and drinks at the Chalet before we went exploring the mountaintop a little further.

We tried to spot the two grizzly bears Grinda and Coola, who reside at Grouse mountain, but they were asleep. On our way back down with the gondola we got lucky and had an amazing view over Vancouver. All in all, I’d say it was a pretty successful day.

Would I do the Grouse Grind again? – Maybe.

What about you? Have you done it? Or is it on your list? Was your weekend active? Or lazy?

Tell me more about it next Pub Night, 7pm at Sailor Hagar’s in North Vancouver! It’s only a short walk from the sea bus and has a beautiful view over Downtown Vancouver. Plus, it’s a real neighbourhood pub, as Canadian as it gets. 😉

See you all there!

New week new “What to Do in Vancouver” inspirations 🙂

What is Canada without hiking? Do not miss the chance to explore the beautiful hiking trails in the Vancouver area. In this blogpost I will give you some insight into the huge variety of hiking trails with amazing views and the most beautiful nature you have ever seen.

If you fancy a hiking trip right on your doorstep take the Seabus to North Vancouver or a bus ride over the famous Lions Gate bridge to start your adventure on Grouse Grind. It’s a 3-kilometre trail to the top of Grouse Mountain.

From my own experience I can say that this is very exhausting but definitely worthwhile. The view over the city on top of the mountain is unbelievable.
Additionally, have a look at how fast some people have climbed this mountain – there’s a list on top it’s kind of crazy.

This Park features several hiking trails in addition to the main attraction, Lynn Canyon Suspension bridge. It’s smaller than the famous Suspension bridge but it’s free and a beautiful place which is definitely worth a visit. There are trails suitable for every hiking level so just find your perfect trail and enjoy. It’s also a nice opportunity to spend your day in the refreshing 30-foot pool; a nice spot for swimming, having a picnic and of course taking a lot of pictures. There’s a lot more to discover, but you’d better explore it yourself. 😉

This trail starting in Deep Cove at the Baden Powell trailhead is a really popular hike in North Vancouver and definitely a place where you’ll meet a lot of tourists from all over the world. It’s around 4 kilometers long so it is possible for most hikers. Even if it’s a slightly shorter hike the view leaves nothing to be desired. On this all-season hike you’ll have an amazing view of Indian Arm (that’s why it’s sometimes called Indian Arm Lookout Trail).

As a part of the Howe Sound Crest Trail this 11km round trip hiking trail gives you the opportunity to take a longer walk (around 5 hours) and experience Canada’s amazing nature while enjoying spectacular views of e.g. Howe Sound. So, if you’re ready for a more challenging hiking trail; this is certainly a good option.

Maybe you’re thinking about which trail you have seen on the countless pictures with the crystal-clear blue lakes on Instagram? That’s definitely Joffre Lakes Provincial Park.

For this hike you should plan more time, like a whole day, since it is a bit further away from Vancouver and you need a car. It’s one of British Columbia’s most beautiful hikes where you can pass and discover all three beautiful lakes in one trail.

Hope you will enjoy your hiking trips when you get to Canada. 🙂

Have you ever been to Grouse Mountain? Did you do the Grouse Grind? No? Then continue reading!
If yes, then you know what I will talk about!
This weekend I did the Grouse Grind.

What is the Grouse Grind?

The Grouse Grind is a 2.9-kilometre trail up the face of Grouse Mountain, commonly referred to as “Mother Nature’s Stairmaster.”
But this trail is very challenging. REALLY. I underestimated it. I want to describe my thoughts and feelings during the hike like this: 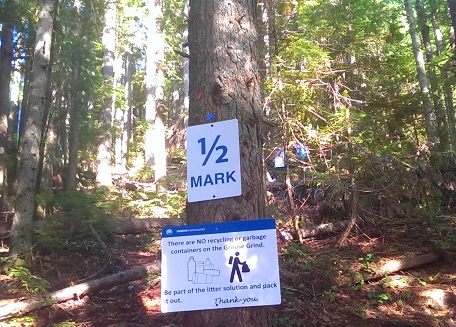