What to do on the weekend? That’s the question you ask yourself on Fridays, right before the weekend starts! This weekend is a special one, since most of you will be off on Monday due to British Columbia day. We lined up a few activities and events for you to give you inspiration for this weekend.

This weekend is Pride weekend, so there is a lot to do on Davie Street (between Burrard & Jervis). There is already a party going on tonight from 6pm to 12am. There are multiple stages, food vendors and a silent disco! Sunday is the day of the big parade and the festival on Sunset beach. There are over 130 parade entries with a lot of amazing floats and fun colors. The parade will start on Robson, turn down Denman, and turns onto Beach Avenue. Internex is going to celebrate Pride on Sunday, and we will meet in front of the Blue Ruby Jewellery at 11.45 am.

On Saturday and Sunday, the 41st Annual Powell Street Festival will be held. This festival celebrates the Japanese Canadian art and culture. You can enjoy live music, Japanese food, sumo wrestling and different kinds of art and theatre. The best part of this festival is that it’s free! To check out the entire events, places you need to go to and timetables, visit their website.

Saturday will be the last day of Honda Celebration of Light. It is up to Canada this time and we are expecting an amazing firework show since it’s Canada’s 150th birthday. Since it is the last day of the big event, a lot is going on in English Bay. You can enjoy an aerobatic airshow filled with noise, smoke, skills and suspense at 7.45pm. After that you have to be a bit patient till the fireworks start at 10pm. To have a good spot on the beach, make sure you will be there a few hours prior to the show, since they are closing of the streets behind it.

For those who are off on Monday, take some time to relax after this busy weekend! For the ones that do need to go to work again, keep up the good work and get most out of your weekend! I hope to see you all at the parade on Sunday.

This weekend we had a relaxing beach day, barbecue and watched the Honda Celebration of Lights. Thank you all for coming!

We first met up on Jericho Beach at 4 PM to enjoy the sun and relax a little. Jericho is the perfect spot for that as it is way less busy than the beaches closer to downtown. Some of us had a big party the night before so they got some sleep on the beach.

After the beach we went to a private location to do the barbecue. We wanted to do it at the beach but unfortunately we only had a coal barbecue, which are currently not allowed due to the wildfires. Luckily we found another place to do it and although some preferred other food then the barbecue, it was still fun to eat together.

When it started to get dark it was time to go back down to Jericho Beach to watch the fireworks, but first we got to watch a really pretty sunset. The Honda Celebration of Lights is a yearly event. Three countries compete in the firework competition and on Saturday it was Japans turn. The fireworks started at 10 PM and lasted about 25 minutes, it was so pretty and mesmerizing to watch.

I hope to see you all on PuB NiGHT!

Guess what… we found another great cheap place for sushi with over 150 different meals to choose from. Are you already wondering were you can find this great place? 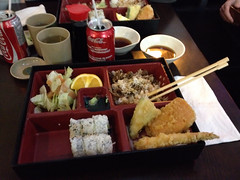 The Fumiyoshi sushi is located on 538 West Pender Street. It is verily quite in there, which makes the services faster. It is also great for lunch, they have extra lunch items which are ready in now time and come for as low as $8.50. And of course free unlimited tea is served by every dish. 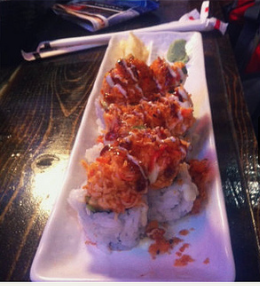 6.95. The Vegetarian rolls are also very good and fill you up. If you do not want to eat there, just order take out. For more information visit their website by clicking here.

Wow… this long weekend it will be so busy! If you aren’t in the Rockies Trip with us, don’t worry, Vancouver offers a millions of things to do…

Say hi! To the Vancouver Pride Week(end) with the Davie Street Party. This street is the heart of the Gay and Lesbian nightlife in Vancouver. There is even a permanent rainbow crosswalk made for this celebration at the intersection of Davie and Bute streets.

The party will start, from Bute St. to Broughton St. at 4pm, with an all-ages area. Then, at 7pm, if you are over 19, you can go to the Lincesed area to continue with the party. You have to buy the tickets previously and enjoy Dj,s performances and much more

An all-ages brunch, in memorial of Terry Wallace, one of the founders of Vancouver Pride.

HOW MUCH: admission by donation

The Pride Parade celebrates its 35th anniversary this year. The parade begins at Robson Street and Thurlow Street, heads west to Denman Street, follows Denman to Pacific Street and Beach Avenue and finishes at the Sunset Beach.

Directly following the Vancouver Pride Parade. The festival begins at Sunset Beach (where the parade ends). The perfect ending with free concerts and a Pride Market!

And if you still feel the party spirit, DJs and cocktails at the Ginger 62, in Grandville Street.

The third and the last day of the Celebrations of Lights, this time hosted by Thailand. Read more about this celebration in our previous What to do on the weekend.

WHERE: 400 block of Powel Street

Well, you cannot say that you don’t have options…

It’s Christmas time! Time for presents, good company and good food! But even there a common things, Christmas is celebrated in a lot of different ways depending on where you are!

As you know INTERNeX office has people from pretty much everywhere! So just asking in the office you can find out amazing information about Christmas in different places!

Today is turn for Japan! Thanks M!

Christmas in Japan is not part of their traditional culture. December 25th is not even a national holiday in Japan! But in general Japanese people are great lovers of festivals and celebrations so Christmas was imported recent years ago. They didn’t forget to import “Santa” (usually call him “Santa-San”) and kids usually get Christmas gifts from “Santa”.

The New Year’s is a lot more important for Japanese. January 1-3 are holidays. The New Year ’s Eve, usually family (or friends) get together, have dinner and wait for the 108 bell chimes, during the ritual taking place at the Buddhist Temples. If you have no temples around your home, you can still catch it on TV! 🙂

According to Buddhist beliefs, 108 is the number of passions and desires entrapping us in the cycle of suffering and reincarnation. So, the 108 bell chimes symbolize the purification from the 108 delusions and sufferings accumulated in the past year.

ved to be representative for the whole year that has just commenced. Therefore, the day is supposed be full of joy and free of stress and anger, while everything should be clean and no work should be done.

Various kinds of special dishes are served during New Years. They include osechi, otoso (sweetened rice wine) and zoni (a soup with rice cake)

How do you usually celebrate Christmas at home?