You may remember this little post about a month ago, where I wrote about a guy named Mario and his goal to raise money for children in need by fighting in the 2012 Karate BC Provincial Championship. The big day is here in just 3 short days and Mario has been training endlessly! With the event being so close, the excitement is definitely taking over.

Let me give you a little introduction of Karate. It is a type of martial arts that originated from Okinawa, Japan and was brought over to Canada by Japanese immigrants in the 1930s.

After the Second World War, the first karate competition in Canada was initiated by a man named Masami Tsuruoka which laid the foundation for the Canada`s National Karate Association. Though Karate is not an official sport in the Olympics, there are many tournaments that are held worldwide every year where Canada plays a significant part.

If are interested in learning more about the sport of Karate, I would encourage you to attend the tournament and in doing so, support Mario as well!

When? Saturday and Sunday (November 17th and 18th)

Why is Mario doing this? By making a comeback at the age of 50, Mario is supporting two charities with this event: Children’s Hunger Fund and BC Children’s Hospital.

Children’s Hunger Fund has been helping neglected orphans in Romania by sending over s regular shipments of food, medicine and clothing to 43,000 Romanian orphan daily. What is really admirable about this non-profit organization is that they seek to help children before disaster strikes!

BC Children’s Hospital is committed to helping children in our very own Vancouver community who are suffering from diseases such as leukemia and diabetes. They are very active in not just saving lives by curing children, but in preventing illnesses by conducting research into vaccines. With research being a vital part of their work, they were able to heal Adrian, the son of Mario’s friend, when he suffered from leukemia last year.

These charities are dedicated to helping children living right in our city that desperately require help. Join us in supporting them in creating better lives and future for children in need!

Thank you to everyone’s support and I hope that you will keep on supporting Mario and spreading the word about this event!

This year six million children will die from hunger related causes and more than 750 children will require treatment for cancer at BC Children’s Hospital. Sadly, those statistics are probably not the first thing you want to hear on this lovely Casual Friday, but it’s true.

I don’t know where most of you are in life, but for myself, I often take my warm house, clean food and water and my healthy body for granted. More than one billion people in the world cannot afford to do so. The past Thanksgiving holiday has made me think about what I can do about these problems that seem so big and untouchable.

This is why I want to tell you about an amazing person and his ambitious goal that I’m so honoured to be a part of:

Mario is a former Romanian karate champion and has grown up seeing malnourished children in his home country. Yet, he has also seen the generosity of Children’s Hunger Fund in distributing 1 billion dollars in food and other resources to help 10 million children in 73 countries worldwide. As well, Mario witnessed the difficulties of leukemia on his close friend’s son, Adrian last year. Thankfully, with the chemotherapy treatment Adrian received at BC Children’s Hospital, Adrian is now cancer-free and full of energy!

Seeing the positive effect that these charities have brought, Mario feels the need to do something more. Instead of celebrating with an extravagant party for his 50th birthday, Mario has decided to combine his passions of karate and fitness with helping children in need at the same time. 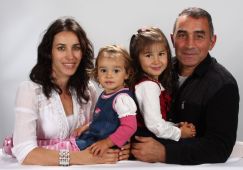 How is he going to accomplish this? Mario will be making a huge comeback in the karate world by fighting at the 2012 Karate BC Provincial Championship on November 17th and 18th. With his knowledge as a nutrition and fitness consultant, Mario is proving that even at the age of 50 he has what it takes to compete and win at this prestigious tournament. Mario is hoping to raise awareness and funds for the two charities very close to his heart – Children’s Hunger Fund and BC’s Children Hospital.

By fighting with everything he has, Mario is committed to helping children who are suffering with childhood diseases or are in desperate need of food. This may seem like such an ambitious goal, but Mario’s heart is definitely big enough.

If you would like to support Mario or learn more, please visit www.mariofitfightingforkids.com.