AAAWOOOO! What an incredible trip we had with our amazing West Trek tour guide Maddy and the rest of the party-crazy wolf pack!
Where do I begin? We just did and experienced so much! I guess we should start by breaking it down into the different days.

Day 1
Friday morning. We got up pretty early so we could meet in front of the Waterfront Station at 7am. Everyone felt like a zombie but we were raring to go! The Rockies were waiting for us!
We boarded the bus which was going to be our home for the next several days and got to meet our tour guide Maddy. Some of us had already met her on our trip to Whistler a few weeks back. She’s always full of energy and got everyone super excited quickly.

We left rainy Vancouver behind us and after a couple of hours reached the first stop in Hope. Here we bought lunch and snacks for the remainder of the day’s bus ride. We had a few

more stops where we also got our hands on some alcohol for the first party of our trip.
Finally we arrived at our first day’s destination, the West Trek cabins! Everyone was quickly shown their own cabins and we then it was time for the winetasting followed by a BBQ dinner. Naturally,
we had to play some games beforehand though in order to decide which table gets to eat first. Natasja was immediately up for the task and won a hula hoop duel against a Brazilian who looks strikingly similar to Khal Drogo.

As soon as everyone was sufficiently fed, the wolf pack hurried to retrieve their drinks and Maddy turned up the music. Let’s get this party started! There were drinking games being played in every corner of the room and people dancing in the middle. It was a legendary first night!

Day 2
Once again we had to get up quite early. Had lots to do and lots of ground to cover. We weren’t even in the Rocky Mountains yet. First stop of the day: Leo H. Downey’s buffalo ranch. Leo used to be a musical artist in Los Angeles but realized it wasn’t something he really wanted to do. So he just packed what he needed and took off into the wild where he spent a long time until he found his purpose in Canada. Truly inspiring!

Next, we checked out a wolf sanctuary. I mean it was a matter of course for us. We’re a wolf pack as well after all. And when we howled they howled with us!

Moving on we finally made it to our first Rocky Mountain stop at Emerald Lake which was mine and most of the rest’s favorite lake by the way. It was very cold when I dipped my hand into it but the color of it together with the mountains in the background…it was a breathtakingly beautiful sight to behold.

Afterwards we visited Lake Louise and Lake Moraine. They were quite enchanting as well.

The day was just beginning though. Following the lake visits we went up the Banff Gondola. However, there wasn’t all too much to see due to rain.
Shortly after, we arrived at our hotel and prepared for yet another epic night. It started at this pub called Devil’s Gap, continued at the Hoodoo Lounge and ended back at the Devil’s Gap. Lots of drinking and dancing again and most importantly fun!

And that’s half time! The rest of our trip will be in our next post.

Only two more weeks until we’re going to the Rockies again, so we want to give you some more information about this great trip.

Next to all the activities that are included in the price of only $329, there are a few optional activities, for which we get a discount as well: 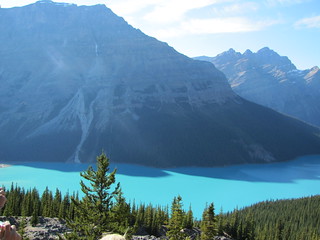 Discounted Optional Activities: ( prices will increase slightly if you book these activities on the tour)

Canoeing (probably about $15)
Banff Gondola $35
Columbia Icefields Glacier Adventure $50
Banff Gondola & Glacier Adventure Combo $80
River Safari, Bear Watching $67
Canoeing at Lake Moraine
Canoeing at Lake Moraine is a great activity for everybody and provides you with a peaceful activity to enjoy the Banff National Park. While exploring the lake by boat you have the chance to visit corners of the lake that can’t be accessed by trail! Each canoe is shared by up to 3 people. 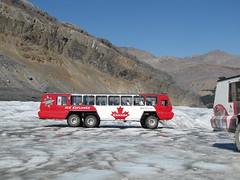 Columbia Icefield Glacier Adventure
The columbia Icefield Glaciers adventure reveals the most unique attraction in the Canadian Rockies. Massive Brewster Ice Explorers, especially designed for glacial travel take passengers on a remarkable excursion onto the surface of the Athabasca Glacier.
Sulphur Mountain Gondola
Ride to the top of Sulphur Mountain in Banff, to experience a stunning view of six mountains ranges. At the Banff Gondola, you’ll see more mountains in a moment than others see in a lifetime. So this activity is a definite ‘must do’ on your trip to the Rockies. 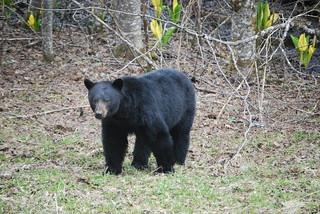 The reiver Bear Safari is an awe- inspiring one hour rife through Grizzly Bear Vally! Located in the picturesque Monashee Mountains of British Columbia, the river safari features custom built, eco- friendly boats that travel through the mountain’s glaciers & jade- coloured waters in search of bear, moose, eagle and osprey, to name only a few of the magnificent creatures you can see during this breathtaking wilderness experience!
Hope many more want to join us for that great trip, you can sign up and pay cash at our office until 5th August at 12pm.
Please remember also that our office will be closed on friday next week.

Only 5 more weeks and some days before we leave for another great adventure. The rockies trip is known as one of ‘THE MUST-DO TRIP‘, while visiting Vancouver.

We will start our trip on April 18th and will be back in Vancouver on April 21st at night. You will enjoy a four day break from all the craziness in the city during the trip.

Our first stop of the tour will be in Hope, BC and we will then continue to Kamloops and the Spahats Falls. We end the first day in Valemount with a lovely BBQ Dinner and a hockey night.

The next day we will make our way to the popular Rockies resort Banff, Alberta. On our way we will stop at Mt. Robson, Jasper, Athabasca Falls and the Columbia Icefields. After a long day of sightseeing and traveling we will end the day with a big party in Banff.

On our third day we will have a tour trough Banff and will make our way to Lake Louise and we might make a stop at Lake Moraine. From there on we will take our route towards Golden were we will enjoy another lovely BBQ and a campfire party.

On our last day we will stop at Last Spike, the Okanagan Valley and the Othello Tunnels before we will end the tour in Vancouver.

Over the last years a lot of awesome pictures were taken during our Rockies Trip. Click here to get a very very beautiful impression of the Rockies.