The same procedure as every Wednesday: meeting up at a pub, talking and having fun. But obviously, not every PuB NiGHT is going down the same way. Here’s the short story of last night.

It’s 7.15pm. The INTERNeX PR-team is 45 minutes early for the PuB NiGHT. But of course, this didn’t stop us from going to 131 Water sooner. We ordered our first round of drinks and decided to play a game: Rummikub. 2 winners and 1 loser later, the first candidate showed up. It was Toni, who had her last PuB NiGHT here with us in Vancouver. 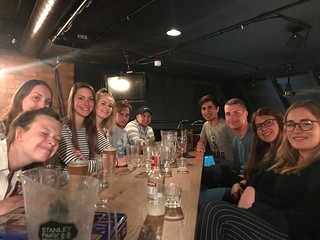 The more time passed by, the more of you joined us at our big table. And look: several drinks, laughs and talks later, another last-PuB-NiGHT-candidate came: Sebastian. And while the last few people just showed up, some of you were already heading home. Why? Well, it was getting late already and some of you are responsible adults that want to be fit for the next day at work. Good for you!

When 131 Water closed its doors at 11pm (which is actually still very early), many of us were not ready to go home yet. So, we decided to head to another bar. After paying our bills, we walked outside, crossed the street and within 2 minutes, we were sitting at a table at the Lamplighter. Everyone enjoyed 1 or 2 more drinks. Suddenly, it was already 1:30am. Once again, time flew by fast.

Thank you for the great night, see you all for our barbecue on Friday!

Life is a waste of time, and time is a waste of life. So let’s get wasted all of the time, and have the time of our life. Yes, I think I can speak for everyone that joined yesterday when I say that we had another amazing PuB NiGHT! The Lamplighter was a great place to have delicious beers, fancy cocktails and even tasty food like curry wurst or yam fries.

The longer we were sitting at our tables, the more of you showed up. Everyone was talking and having a dri– BOURBON BINGO! Oh yea, we played Bingo at the pub, too. Jessica and Moa were lucky enough to win a Bingo round. They were rewarded with shots and glasses of beer. CHEERS!

When the Bingo was over and the last glasses of beer were emptied, we continued our PuB NiGHT adventure. And as usually, we ended up at the Met, our favourite karaoke bar. This was the moment where everyone showed off their stunning singing voices. But all good things must come to an end, so when the clock hit 2am, we grabbed our jackets and went for some fries and nuggets. With a full belly, we went home to bed and dreamed of all the wonderful things we did at this PuB NiGHT.

Here is some wisdom for the next PuB NiGHT to come: If the ocean was beer and I was a duck, I would swim to the bottom and drink myself up. But the ocean’s not beer and I’m not a duck, so let’s drink these pints and get messed up.

Thank you for this great PuB NiGHT and I see you this weekend at the 24 hours of winter on Grouse Mountain or next Wednesday at 131 Water!

Tomorrow is a very special day for us! It’s Jelle’s last event. He will leave us next Thursday, to make a road trip around USA. So join us to say bye bye in one of our favourite places:  The Lamplighter Public House. Located in Gastown, it’s one of the best pubs in the area: cozy, enormous and the food is delicious.

So, time to say bye and have fun with us. Remember to join us in the Facebook Event!

Take a look to the special offers:

And we can play Bingo! It starts at 8 PM.

WHERE: 92 Water Street Vancouver, BC. MAP

Don’t forget to bring your passport

Last night we had our weekly pub night at the Lamplighter Public House, the city’s busiest pub for good reason: friendly service, cozy design and a large selection of drinks.

Lamplighter is also a very popular place because they usually show a variety of sports; so yeah, for those who want to watch soccer, this is the right place!

We had an awesome time there: We were drinking while watching hockey. (Vancouver vs San Jose).

The match was really intense, and for those who love hockey (mostly 95% of the pub) the atmosphere became really tense when Canucks lost (I know, too bad…but guys, keep in mind this is the first game, so Canucks will have more opportunities).

By the way, the place and the service were awesome, and we had a free bingo during the intermissions. Unfortunately we didn’t win, but next time we’ll do it for sure!

And the most important thing: it wasn’t pricey! 5$ Wings and $4,25 featured Phillips beer. Sounds good, eh ?

It was such an amazing night !!

I hope to see you soon and thank you all for coming!