I hope Monday has treated you well. At least the weather has been treating us very well through the whole weekend. Let’s do a little recap of what happened during these sunny days.

This weekend was a pretty chill one for me. On Friday we spent the night chilling with some friends. We made delicious dinner together and started the night of by playing some beer pong. We also checked this one veteran bar called The Legion where you can find pretty cheap drinks (just saying).

On Saturday I headed to White Rock to visit my friend. White Rock is located right next to the US border and it is pretty cool since you can literally see to the States while standing on a beach in Canada. Once again we enjoyed an amazing sunset at the beach. Yes I really am a big fan of sunsets.

Sunday it was time to gather up the INTERNeX gang and head out to play some Laser Tag! We played two rounds all together and I must say I did not expect it to be as sweaty as it was. It really was a work out. Especially in our first round when we had about 30 kids playing with us and running around like crazy. The second round was luckily a bit calmer since we had some adults playing with us. In the second round our gang was also divided into two different groups so we had the chance to compete against each other. Not mentioning who won and who didn’t but my team did play pretty well 😉

Big thanks to everyone who showed up. This week we have a lot of things coming up so make sure to stay tuned!

It’s Friyay! I bet it is the favourite day of the week for most of us. If you have your whole weekend fully booked already that’s good news for you. If not, come to do something with the INTERNeX gang ☺

The weather seems so be nice for the weekend (not sure if it’s trustworthy) so if you have time you might want to go outside and just enjoy the sun. The sunsets here in Vancouver are also amazing and that’s really something worth seeing. Grab a book or go with a friend, take a blanket and some snacks and head to the beach. Here is a picture from English Bay Beach from few weeks back when I went there to enjoy the sunset. 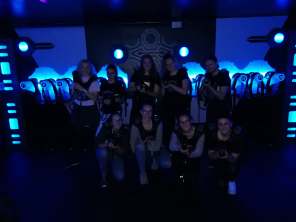 Would you like to include something more fast and furious in your weekend? This Sunday the INTERNeX gang is heading to Planet Lazer to play some Laser Tag. You might want to wear something flexible and comfy since the game can get serious sometimes 😀 Other than that you only need to bring yourself. We will meet at Braid station at 5.30pm. Make sure you are on time but if you can only join later let me know. Hope to see as many of you on Sunday as possible. We will have a great evening for sure!

Have a great Weekend! 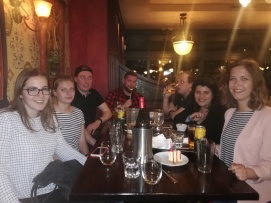 It’s beginning to look a lot like… summer! I did not expect to be able to wear shorts mid-May, but Vancouver continues to amaze me. Let’s look back on this fun, sunny weekend. 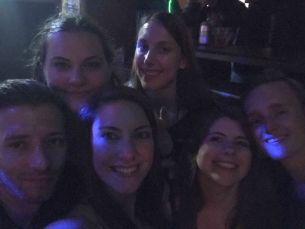 Friday night, it was time to go to our favorite country bar again: the Yale Saloon. And you know what that means… line-dancing time! Sadly, we were not wearing cowboy boots or hats, but that did not make it any less fun. Since we went line dancing before, we were not sure if we would learn a new choreography this time, or if we could show off moves we had already learned before. The choreographer did not let us down: we learned some new moves! When the line dancing ended, it was time to join some of you to the Bourbon. As always, we had a great time catching up with all of you and dancing to good music (sometimes even in a cage).

On Saturday, it was time to watch the Grand Final of 2018’s Eurovision Song Contest. I might have left Europe, but the European part of me has not left me. (Although, not only Europe participates in the contest, so what does being European regarding ‘Eurovision’ mean anyway?) My favorite thing about Eurovision is discussing the performances with friends, since most of the performances are quite, let’s say, unique. But hey, it would not be Eurovision if it didn’t include some laughs. I discussed the show with my Bulgarian friend from college, both of us supporting our own country. We figured neither of our home countries would win this year, but Israel’s “Toy” song winning the contest was definitely unexpected. Not only because of the song, but Israel is not even in Europe. Although, even Australia participates, so can we really be that surprised?

When I woke up on Sunday, I opened my weather app and saw that it was going to be 25 degrees Celsius that day. Great! Time to go to the beach! I spent the afternoon enjoying the sun and playing beach volleyball with some of you. At 4:30pm, we took the sky train to Planet Lazer: it was time to play laser tag with all of you! Playing three games was a lot of fun, yet exhausting as well. Water was our best friend when we finished. After hydrating ourselves, we all went home to rest.

I hope you all had a great weekend!

See you on Wednesday at 131 Water!

Another week, another part of 2016. This week the months April, May and June are to discuss.

April started off with Bränboll. Bränboll is a game played in Sweden, Norway, Denmark and Germany. The rules are different in every area, so I am not able to explain them. If you ever want to play it go to Google, YouTube or ask someone who knows the game. We had a great day and lots of fun playing this game!

We also enjoyed the PuB NiGHTs and the Beer Pong Night at Cambie.

In April we also had another Rocky Mountains trip! This one was different from the one in February. The first day we travelled to Valemount. After arriving there we had a dinner and played some Hockey in the Rockies. The rest of the evening we sat around the campfire. On day two we drove to Banff. On our way there we stopped at Mount Robson, travelled through Jasper, visited the Athabasca Falls, stopped at the Columbia Icefields and saw Peyto and Bow Lake. After arriving to the hotel we had dinner and went on a night out at Hoodoo in Banff. The third day was a drive to Golden. On our way we stopped at Lake Louise. When we arrived in Golden we checked in into our Mountain View Cabins and enjoyed a BBQ dinner. On the fourth day we already had to drive back to Vancouver. During this drive we stopped at the Okanagan Valley for lunch and joined the Highway 5 to drive through the Coquihalla Valley, where we say the Last Spike and Othello Tunnels.

In April Rebecca joined us in the INTERNeX team, which was great! She is already doing a great job in developing and marketing the Outbound INTERNeX Program.

In May there was a Color Me Rad 5K Race in Surrey, some of us joined this race and had a great time! We also played laser tag in the end of May. It was definitely lots of fun! And like every month we had PuB NiGHTs this month which were great evenings!

In June it was a great month to go to the beach, the weather was finally good enough so we made use of that!

Another trip in June was the Tofino trip. We went there by bus and had two great days! Some of us went with the Water Taxi Tour to the Maquinna Provincial Park to see the natural hot springs, whales and other wildlife.

We also went to the movie Finding Dory as it just came out in the theaters. Which was lots of fun! We also had our weekly PuB NiGHTs again and went to the Beer Pong Tournament in Cambie.

In the second part of the year the PuB NiGHTS, events and trips were organized by Sandra, Julia and Veronica thank you for doing a great job!