On Saturday I became a tourist for a few hours by going on an amazing and interesting tour with a hop on hop off bus. And even though I have been here for a month now, I saw things of Vancouver that I did not see yet. I also learned things about the city, which is always really cool if you ask me.

After the hop on hop off bus I grabbed some diner and went to the Harbour Green Park to meet some people from INTERNeX. We had some drinks near the water and went home pretty late.

On Sunday I finally had the opportunity to sleep in and I went to West Vancouver to meet Bart and Lena on the beach which was really nice considering the temperature. After cooling down on the beach we had some really nice dinner at Whole Foods and went home to fresh ourselves up a bit.

At night we met up again in the Harbour Green Park, where we had some drinks again and did some funny drinking games. And we went home even later this evening.

On Labour Day we had our weekly event which was Music In The Park at the Capilano River. I arrived unfortunately later for the event because of traffic problems, but when I arrived the event was a little bit different than we expected it to be. We decided to go to Lynn Valley where we had some lunch. The rest of the group decided to go to Lynn Canyon for a nice swim, but since I forgot my swimming wear and was really tired from the night before, so I decided to go back to downtown and had some amazing dinner at Commercial Sushi (definitely a place I recommend everybody) before heading home.

Thank you all for joining our weekly event and hope to see all of you at the PuB NiGHT tomorrow!!

Last weekend the sun was shining in Vancouver and we went on a little trip to a beautiful nature park called Lynn Canyon, located in North Vancouver. The park was amazing with a lot of hiking trails, waterfalls and the famous Lynn Canyon suspension Bridge.

After walking over the bridge we went exploring the park by hiking and searched for some black bears in the forest.  Unfortunately we didn’t saw any bears, but hopefully next time 🙂 On our way through the park, we saw people jumping in the water from cliffs and Holy Jesus, the rescue theme was in action.  After a relaxing hike it was time for coffee and snack at the delicious Lynn Canyons Coffee shop.  It was a hot day so we ended up bathing in the cool water. What a perfect day in a beautiful Canadian nature.

Thank you guys for joining us on this amazing day trip.

It’s Sunday and guess what… it’s time for Smart Saver. 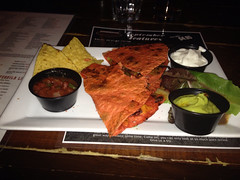 Want to get eat out for lunch but haven’t really got the money. Don’t worry. There are a lot of places where it’s actually possible to get a decent meal without having to pay more than 5$! So now you’re probably thinking “yeah, right, for sure the variety of food has to be limited if it’s only 5$.” Well, actually this is not the case, especially not if you make a little effort to look for happy hours around Vancouver. Australian, Japanese, Chinese and Mexican food… burgers, sushi, tacos, burritos, pies. You name it. It’s all there for no more than 5$. Click here to check out all of the good places. 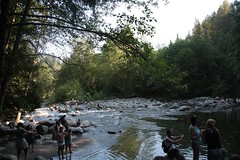 If you want a bit of thrilling entertainment, just go to watch cliff jumping at Lynn Valley. This is completely free of charge, yep that’s right 0$! During the summer months Lynn Valley has become a popular place for daredevils to jump off the cliffs into the cold water. There are several other locations where you can watch these daredevils, for instance Lions Bay or “Granny’s Cove” in Capilano Canyon. Since the weather is still great there should be a good chance to spot cliff jumping. Click here for a complete guide to the different places where you can be lucky to spot cliff jumping.

What are you waiting for? Get out there, enjoy life, and save some money!

The summer is just around the corner, so it is time to go outside and enjoy the beauties of Vancouver’s nature.

As many of you know there is a suspension bridge called the Capilano Suspension bridge. It provides you with a great view of the beautiful nature in Vancouver. It feels like you are not in the city anymore and is a stunning view as soon as the sun comes out, however this view comes with a pretty big dollar sign. It cost you around 35$ to get in the park and enjoy the beautiful view. You are probably thinking way writing about this, well just wait for it…

… so here comes the smart saver, Lynn Canyon Park. This Park is located in North Van and has a supension bridge as well and guess what it, it’s for FREE! In the park different series and movies are produced, such as Eureka or X-man:

The Last stand. There is more to see at the park than only the suspension bridge. If you walk over the brigde at take the first right you can wander a small route down to the twin falls bridge where you can see two nice waterfalls. Afterwards you can hike up the steps back to the suspension bridge. If you would like to hike a little bit more, than you can go to the 30foot Pool, which has beautiful clear water.

How to get to Lynn Canyon Park. Take the sea bus from Downtown to North Van, from there you can take either bus #228 or #229. The bus will take you to Lynn Valley Center from where it is a 15minute walk to the Park main entrance.

Hope you have fun and let us know how you liked it!

It’s time to make a review of the second semester of the year!

July was a month full of events! The month started with a big celebration of Canada’s day!! The city was full of Canadian flags, and th

e parade and the fireworks were just amazing. In July, Janin and myself, Irene started our internship( and it seem like yesterday!!) It was completely crazy but the second day of my internship all the PR team went to Seattle to celebrate the Independence Day there! In the same week we had a crazy pub and club night!Partyy!In July INTERNeX was one of the five worldwide nominees for the 2012 STM Star AWARD!This award honors organizations voted by industry leaders to be “Stars” in the categories language learning, work experience and volunteer programs! Well done!We finished the month with a a great Festival of lights with amazing fireworks at English Bay.

August was even more exciting! We started with a pub crawl instead our ordinary pub night..because August was The Month! We had the most amazing trip ever in The Rockies! I will always remember the color of that lakes, that mountains, and all the fun that we had! In August Barbara, the new placement manager started in the company. This year we had the chance to celebrate the 10th Anniversary on a great Summer Party .A lot of prizes were given away an some of our candidates enjoyed for free a session of Paintball!! But August was also the month of a lot of Goodbyes. The first one was Petra after 8 months with us, th

e next one was Katie, our American intern that spent her summer working with us. Summer is the perfect time to practice some outdoor activities such as the incredible fun wakeboarding!!Or visit places like the amazing Lynn Valley!!That was the last activity that Xenia, enjoyed with us because she had to come back to Germany, after a couple of months working with us. The last one of leaving us, was Lies, our Belgium pr after more than 7 months with us.

Bowen Island. After so many goodbyes, was great to have new faces between us!Marianne our outgoing German arrived to our team!!A week after our Chinese Canadian Queenie arrived as well!There is not a better way to celebrate the new crew with a Pub and Club Night! But it was also time to say goodbye to one great colleague and friend, Janin! Simon, our PR coordinator started a new chapter with his own company, Teccrab! Good job, Simon!

It was probably the busiest but funniest three months of the year!

Have you crossed a suspension bridge? INTERNeX went to Lynn Canyon last Sunday and we had the opportunity to get this photo of Jenny, one of our candidates crossing it!

It is awesome, isn´t it?

Don´t miss the opportunity of joining us in all the events we have planned for you!

In the beginning of the weekend the Staffhouse organized – again 😉 – one of their legendary House-Parties, and it was a success! We were approximately 30 crazy party willing people and celebrated into the earliest morning hours.

The next day began a bit lazy, well it also didn’t start that early! But anyways, some of the Staffhouse members went to Lynn Valley and some went to the beach just to hang out and to enjoy the great sunshine-weather of Vancouver. I went with some other Guys to the Supermarket and Gas-Station to organize groceries and gas for the Staffhouse BBQ in the evening, and you can imagine, it was again a success. We had lots of fun and also some friends joined us. After the BBQ we all together watched some movies.

the Staffhouse, which was a really exhausting trip, but it was really worth it because when you reach the top you are not only proud of you that you have survived it, no, you also have a FANTASTIC view over the whole City of

Vancouver. Amazing! But we were crazy enough not to take down the gondola for $10, nope, we hiked down which was also an adventure for its self, because we were not sure if this has been the correct way down, but we were lucky and arrived safe at home in the Staffhouse. Because we also had some stuff left over from the BBQ from Saturday, we just did another one 😉

So I hope you also had a fantastic weekend how was it?