How much do you know about indigenous people in Canada? Take the opportunity this month to learn about this part of Canadian history and culture during the National Aboriginal History Month.

The core celebration is the annual National Aboriginal Day on June 21st. This day is dedicated to remember and honor the contributions of aboriginal nations to the heritage of Canada. June 21st was proclaimed National Aboriginal Day in 1996 and events are held all over Canada to praise the heritage and cultures of Canada’s first people. Many cities and communities organize festivals and barbeques with traditional music, dance and singing, also called Pow Wow. One can learn about First Nations cultures, see traditional ceremonies and native crafts.

There are three Aboriginal groups in Canada – the First Nations, Inuit and Métis peoples. The name First Nations includes all native tribes and groups of Canada except the Inuit and the Métis people. There are a lot of different cultures and symbols but the one familiar to us in BC are the totem poles and masks. The Inuit people originally inhabited the Arctic regions of North America and the most famous symbol is probably the Inuksuk, especially know on the West Coast. The Métis people are considered a separate native group of a mixed heritage between Indigenous people and European settlers.

If you want to know more but missed the Vancouver events on June 21st, you can stop at the Klahowya Village in Stanley Park, an aboriginal village where you can experience Native songs, dance, art and cuisine. It opened on June 21st and can be visited until September 16, 2012.

Batman, Wolverine, X-Men….we all dream of living vicariously through the masks or amazing powers of a superhero.

Come down to Blarney Stone tonight to celebrate TELETOONS AT NIGHT!It’s Teletoons, but for ADULTS ONLY!

Blarney Stone will be transformed into a cartoon wonderland.  There will be non-stop running of upcoming cartoon programs throughout the night.
COME EARLY!And you can get FREE BEER! The first 200 people to come and fill out a survey on an iPad wins a free beer!
In addition, there will be a photo station where you can take pictures with ROBOT CHICKEN.  The photos may be retrieved from Facebook.
If you want to see this cartoon-filled night, come to Blarney Stone’s to enjoy beer, some music, and a fun atmosphere sure to appeal to the kid in you!

With the eery and dark atmosphere, it was a perfect way to accompany the frightful night that was awaiting us.

Our first stop was The Asylum.  There was fog and smoke, and of course darkness.  We tried to hold hands throughout the walk down the dark and narrow corridors.

As we walked through, there were rattling doors and loud knocks on the door with screams demanding to be let out.

Our second stop was Hollywood Horrors.  The scariest part was a Freddie Kuger look-alike suddenly running after us.  There were many Jason’s with masks and chainsaws lurking in the corners.

Our third stop was the Car-n-Evil Haunted Clown House.  There were already two clowns greeting us.  Talk about a phobia of clowns! Now I know why – with their masked deceptive smiles and evil eyes peering back at you, it would send chills down anybody’s spine!

An interesting feature they have is the 3D glasses! As you walk through the Clown House, you see layers of footprints on top of the ground, and splattered paint and blood around the walls.  The 3D experience increases the intensity of the fear as every clown seems to pop out at you!

Our fourth stop was The Darkness.  As the name implies, the whole house was dark, and it was hard to even step one foot in front of the other.  This one had rattling beds, and a dead corpse that tries to crawl out to catch you.

Our fifth and final stop was the Haunted Mansion.  It was the most fun-filled, as we see a family of dead corpses lying around.  One of the girl had a doll in her hand, crawling the ground to catch you.  There were alot of dead corpses tied by their heads hanging by the exit, so you had to swat your way through the dead corpses before you exit the house!

There are also rides included in the ticket, so we got to catch a few!

The scariest part was having costumed people sneak up on you.  Yesterday, there was Jason running after you with his chain-saw, dead corpse, dead children, clowns, and many more!

Come join us for our upcoming Pub Night this coming wednesday!!!

Yesterday was the Paintball event! Thanks to everyone who came! It was an amazing day filled with a lot of fun!

When we got to Northshore Paintball North Vancouver it was time to get our guns, masks and our overalls to make sure we were really for our  day! 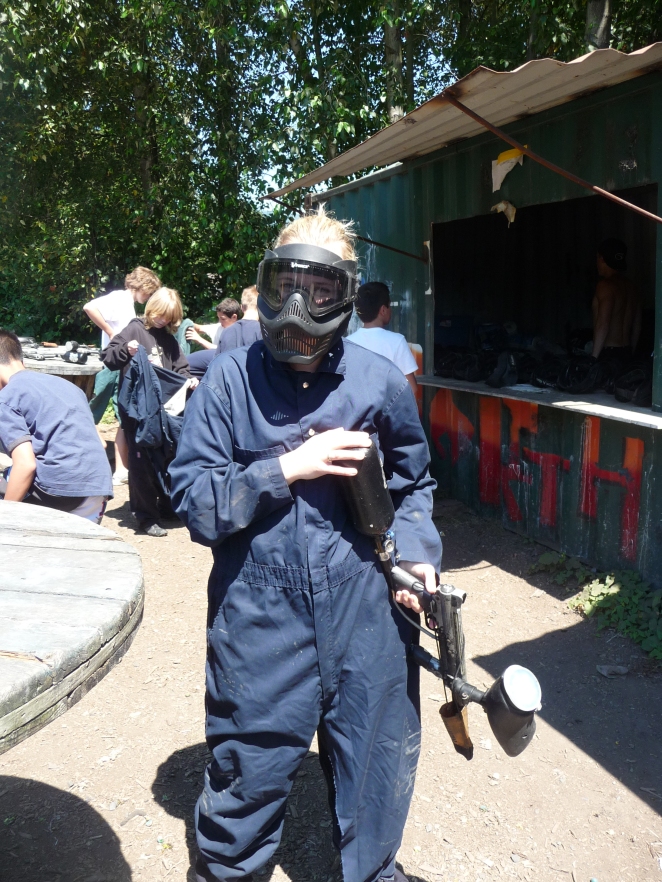 For a lot of us it was the first time going paintballing, and you could tell that some had talent and some were very cautious (maby a bit too much so). The definite winners of the day were Laura and Mette. They shot the most people from our group and were some of the most active players in the field!

To keep it fun for everyone, specially for those who got shot in the beginning, NorthShore Paintball organizes games that lasts about 15 min. Each game has a mission, shot as many people as possible, capture the suitcase and many more! This made the day extra nice because beside shooting everyone we had a real objective making it even more realistic!

Besides some good shots to the chest, legs, fingers, mask and gun there were a few shots that really stood out. For those shot I made up some titles:

The ‘ Most Embarrassing Shot‘ goes to Laura, who got shot in the ass by a fellow housemate!

The ‘ Most Near Fatal Experience Shot‘ goes to Matt, who got shot in the throat.

The ‘ Most Awesome Target‘ goes to Emil, who managed to get shot a lot of times and at least twice  in the head.

The ‘ Most Sneaky Person‘  goes to Ashwin, who had an amazing talent to sneak up on people

The ‘ Most Active Player‘  goes to Mette and Laura, they were awesome out there and shot a lot of people!

Everyone was covered in paint and sand and the occasional bruises at the end of the day but I think it is safe to say that everyone had a blast! Even the muscle pain Mette, Laura and me woke up with this morning is worth it! We had such a good time that we will definitely organize another Paintbal event soon, and we hope that everyone will join us!