That was one insane night…

We met in front of Joseph Richards on Granville street at 9pm to go into the club. After a short queuing line we hang our jackets and went for our free green beer, which by the way taste like normal beer. The club was already busy and we joined the others on the dance floor. Even that it was St. Patricks Day the DJ did not play any Irish music, good for us and our dance moves.

Of course we had our regular dance battles in the INTERNeX circle, which is so much fun. If you do not know what I mean, I mean the times we are standing/dancing around in a circle and someone is dancing in the middle of the circle.

Yesterday we had again an awesome PuB NiGHT and this time we were at “The Cambie Pub”!

The Cambie Pub was full of international young  people and the atmosphere was really great. We met new people, played some Pinball and talked the whole Night about the experience that we had made in Canada.
We even had a couple of new candidates who showed up to make new friends and get to know the INTERNeX PR-clique, WELCOME  🙂

Let us know where you would like to have the next awesome PuB NiGHT?! Just write an E-mail to pr@internexcanada.com

I’ am looking forward to see you on the next INTERNeX PubNight!!!

Hey everybody, today is my first working day of 2011 and I just arrived totally recovered from my trip to Seattle where I was over New Years.
First of all I personally want to wish all of you people out there a happy new year 2011.
The Seattle trip was pretty awesome. If you guys live around Vancouver it is worth a shot and drive down to Seattle for a few days.  Here is my small story about the crazy, but very relaxed city of Seattle
The Journey
So how did it go? The trip was very, very, relaxed except of some little problems. 😉
Last Tuesday I just booked my bus tickets.  I took the easiest and cheapest way to Seattle: Greyhound. A return ticket is just 50 bucks. So I woke up at around 5.30 am, for me way to early, haha, and was hoping that the bus was punctually leaving Vancouver at 7.45 which isn’t normally the case at Greyhound. Surprise the bus was punctual, we could hit the road. The first and only problem: the US. border. In total we had to wait more than 2 hours to pass it. OMG, what a hassle. To my surprise the bus driver gave me the wrong form to fill in and additionally I just was in possession of a one way bus ticket. Sooo, the “normal” stuff happened, I was accused to illegally immigrate into the United States. 😀 The custom’s officer was asking me a million of questions…  Where are you from, where do you work, tell my your company’s name, I do not find you on your company’s homepage, are you business cards faked and so on…. So just the usual stuff at the border. 😉 finally I could convince him that I am just a peaceful, pleasant, tourist who just wants to visit some friends in Seattle over New Years.
Due to these control fanatics and a bunch of snow which came down I finally made it to Seattle after 6 hours.

Arrived in Seattle
After my arrival in Seattle down town, I walked all the way to the Green Tortoise Hostel, which is located in the heart of down town, just a couple of blocks away from the Greyhound bus station at the public fish market. The hostel is pretty cool; nearly every day the staff is organizing some cheap and cool events. For this hostel I paid 30 bucks a night. However it is very clean and modern. Not the cheapest hostel I have stayed in but it was reasonable. (cheapest and best I ever stayed in was in Mexico, Puerto Escondido, direct on the beach, 6 $ – if you want to know more about that let me know.. I would love to give you some advises about traveling around there and Central America).

Dead guy tour
As lucky as I always am, I could hop on a guided hostel tour just 10 minutes after I arrived.  6 $ for the ultimate “Dead guy tour” 4 hours of driving in a Van around the city, meeting new people and seeing some nice places in and around the city. It’s a must if you stay in this hostel.
The tour guide was pretty awesome and he was up for anything we wanted to do. On our tour we visited Jimmy Hendrix grave, checked out Bruce Lee and his son’s grave and also went to Kurt Cobain’ s house. We were even sitting his funky, colored bench where he was chilling, smoking or writing a a bunch of songs. The tour guide also showed us the best and cheapest Places to eat and go out.

Therefore the 6 bucks were wisely invested!
At the end of the tour we picked up some other people from the hostel and we got dropped off on a small hill in the north of downtown with an incredible view of the city.

Thai food
Seattle has an amazing international cuisine. Therefore me and two other guys from the tour went to one of the best Thai restaurants, 5th ave. corner Blanchard I think! Try it our when you are there. The different kind of chicken curries were just delicious! Yummy!!

The following two days
After I checked out Seattle the first day at perfect weather conditions , my friends, which live in Seattle picked me up in the next morning, once  I checked out the observation deck of the tallest building of the city, the Columbia center, Normal price to go up is 5 dollars, I as a student just paid 3$. And I promise, the view is worth it, especially when its sunny. 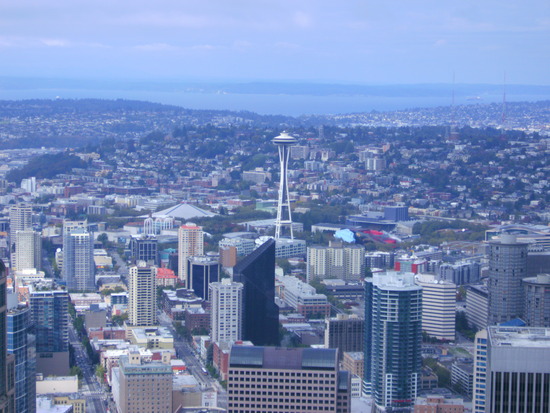 Finally, I saw my friends again which I haven’t seen since I met them in Panama, Central America, 5 months ago. They picked me up with their sweet little ride and showed me some other nice places I had not seen in the city yet.

Isn’t it great to have friends from all over the world? Crushing their places for free and getting to know the secret spots of a city or a place?!?

The last 2 house parties of 2010
The next 2 nights I crashed on their couch, of course for free! The last 2 days of 2010 I spent at my friend’s house having two massive parties. We nearly needed whole New Year’s Eve to clean up the mess from the last party and decorate it for the final 2010 party. And at that one even more and more people came. As normal, a typical American house party. Red cups, a few kegs and lots of fun.

I was glad that my bus was leaving quite early on New Year ’s Day because I did not get that much sleep that night either but I also did not need to clean up the big mess of the party. 😀
Back in the Greyhound  bus I fall asleep straight away, just woke up at the border to quickly buy a new bottle of liquor at the duty free shop, even though my hangover was still sooo bad I bought one (but soooo cheap!! J ) and finally I rushed through the customs, which took me about 30 sec. Canada I love you!
Back in Vancouver I just took the quickest way to my house and my bed to sleep for a long, long time…
In case you come to Europe sometime, be it Holland or Germany (I have to homes 🙂 ) send me an E-Mail or Facebook me. There is always a free spot on my couch!!