Olympic Winter Games 2014, 17 days of exhilarating winter games in Sochi, over 80 countries and around 2000 athletes will be competing against each other in almost 80 event. However for the Canadians only the ice hockey games count, be prepared for some crazy days. Extra for you I looked up some must-knows about the Canadian hockey culture. Just in case you stumble up on a bar full of Canadians watching hockey or to get some extra credit when your fellow workers are talking about hockey.

Hockey was invented in the mid 1850s by British soldiers, which were on duty in Canada. In 1879 students at the University in Montreal gave the game a set of rules. On March 3, 1875, the first indoor game was played at Montreal’s Victoria Skating Rink. Instead of using a ball, they used a puck, to prevent the puck form exiting the rink and hitting spectators.In 1893 the first Stanley Cup was played and awarded to the Montreal HC. The Stanley Cup was invented in 1888 by the Governor General of Canada, Lord Stanley of Preston, to award the best hockey team of Canada. The Montreal Candiens have won the most Stanley Cups, 23 times.The Canucks are named after the Canadian folk Johnny Canuck, who was a skater and hockey player in his spare time.

Beneath  you can find a short overview of the game time during the Olympic Games and especially for the ‘Sweds’ the games are marked blue. 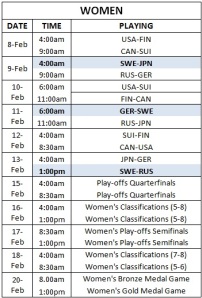 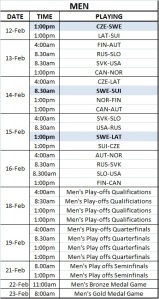 If you want to we can stream some games at our office, of course not the ones at 4 or 6 in the mornings. Just let me know in the comments if you are interested in watching the games and I will make sure that we can watch them.

If you remember the last ones,the 2010 Winter Olympic Games and Paralympic Games were held in Vancouver and Whistler, British Columbia.

But now a small quiz for you guys, what do you know about the Olympics and Canada? Let’s see !

The quiz is over guys, how many answers did you know? I hope you know a little bit more about the participation of Canada in the Olympics, and don´t be shy to make us a question too ! 🙂

Have a nice weekend everybody!

Today’s video of the week shall give you an amazing overview of a small part of Whistler in summertime!

Whistlers is the most favourite winter and summer resort of the Vancouverites located around 125 KMm north from Vancouver. It even has been voted as one of the most top desination in North America! Furthermore in 2010 Whistler hosted several Alpine-events of the Olympic Games.

As you might know the PR-team is very busy with organising and 2-day trip to Whistler. As you can see in the movie whistler is very beautiful in the summer and there are many great activities that you can do! If you are interested then you should keep an eye on the blogs because more information about the trip will be posted very soon 🙂

If you have any suggestions for the video of the week, then please let us know by emailing to pr@internexcanada.com