Oh wow, it is already Monday again. Time flies when you are having fun, they say. I guess that is exactly what happened to me this weekend. I escaped busy downtown for a couple of hours and enjoyed Vancouver’s nature to the fullest.

But first of all, it was time to party on Friday night! We even had a good reason to go out this time: it was Angy’s birthday on Saturday. Blarney Stone was the place to celebrate that Angy is officially no teenager anymore. We enjoyed a great mix of live band and DJ and danced the night away.

My Saturday started off with a breakfast with a view. Traveling 1,5 hours by bus was totally worth to enjoy a coffee at Horseshoe Bay’s Blenz Coffee. This was our meeting place for the day, since we wanted to take the ferry to Bowen Island. After Angy received her birthday muffin, it was time to take off. We could even sit outside on the ferry and enjoy the sun during the short ride. Angy decided to spend her birthday on the water – not swimming, but paddling. So we headed to the kayak rental on the island. It was quite windy that day, so the rental company was hesitating sending us out. But only one hour of playing cards later, we received the official go to enter the sea. So that is what we did! Equipped with

PFD’s and paddles, we sat down in our double kayaks and paddled out of the bay. We could spot mountains with snowy tops and houses hidden in the forest while paddling along the coastline of the island. What an awesome panorama! Some waves were a challenge and a few even entered the boat, but no one had to take an involuntary swim. Three hours on the sea went by really fast with paddling, singing and taking pictures. When we arrived back on land, most of us were soaked. So we got a hot drink and took the next ferry back to Vancouver. Bowen Island is always worth a trip!

On Sunday morning, I found myself back in the same bus we took the day before. Destination this time: Lighthouse Park. A hike and picnic were on INTERNeX’ program for this weekend. Apparently, we were not the only ones who had this plan on this sunny Sunday. But instead of taking the direct path to the famous Lighthouse, we used some smaller ways along the coastline that were not crowded at all. We stopped several times

to take pictures of the amazing view with small Vancouver on the other side of the water. For our lunch break, we found a spot on a huge rock at the end of East Beach Trail. What a great place for a picnic! We hiked back on the other part of the park until we reached our bus stop again. Spontaneously, we decided to enjoy the sun a bit more instead of going home directly. So, we took the bus in the other direction, to Horseshoe Bay, and chilled in the park for the rest of the day.

That was a great weekend and I hope you had a good one too! See you on Wednesday at the Beaver Bar.

Only one… two… three more days until we are on our way to Squamish! Although you already know what we are going to do, let me provide you with some more details.

We will meet at 7:45AM at the Pacific Central Station (1150 Station St) in Vancouver. We will arrive in Squamish at approximately 10:00AM. Then, we will walk for an hour to the base of the Sea to Sky Gondola where we will start our hike. The hike will last three hours and is filled with beautiful nature, amazing views and there will be time to enjoy a little picnic. At the end of the hike, we will be on the top of the Sea to Sky Gondola where we can find the Summit Lodge. The perfect place to treat ourselves to a drink and celebrate we made it!

After that, it is time to go to the next activity: the Sky Pilot Suspension Bridge! The suspension bridge is 100 metres long and gives visitors a breathtaking view of the Sky Pilot Mountain and Howe Sound. When we have had enough of enjoying the sun (although honestly, could we ever?), it is time to take the gondola down again. But no worries, the trip is not over yet! When we are back at the base of the gondola, we will walk for about 20 minutes to have a look at Shannon Falls Provincial Park. Fun fact: Shannon Falls is the third tallest waterfall in British Colombia!

After visiting the waterfall, you will have the opportunity to have a Subway/A&W/McDonald’s (or bring your own) dinner before we head back on the bus. We will arrive in Vancouver at approximately 10pm. The day will consist of a lot of walking, however, it will all be worth it! According to the weather forecast it will be 26 degrees that day so don’t forget to bring your sunglasses and sunscreen! Also, make sure to bring enough food for the picnic and water to make sure you will not get dehydrated.

I hope you are just as excited as I am! See you tonight at the Beaver Bar!

As some of you might know, my boyfriend visited me for two weeks and on the last day we went on a little trip to Garibaldi Lake together with Merle, Tess and my boyfriend. I wanted to show him the great blue lakes without going to the Rockies and this trip was perfect for that.

As it is hard to reach Garibaldi Lake by public transport, we rented a car to get to the lake. We were really lucky, because some people probably cancelled their reservation and therefore we could get a more luxurious car. I already downloaded an offline map on Google Maps beforehand, so getting there was easy.

It was my first time driving a car in Canada, so I was happy to see that the way to Garibaldi Lake was mostly going straight. Driving up to the hiking trail already felt like a road trip, as you can see the beautiful views along the Sea to Sky highway. When we were almost at our final destination, we got confused with where we had to take the exit and therefore had to drive a long way till we could finally turn. After a while of searching, we got a spot right in front of the hiking trail and could immediately start our adventure.

At Garibaldi Lake we made sure that we conquered one of the picnic tables after making many pictures of the beautiful view. Here I could finally fill my stomach and relax till it was time to go back to the car again. The way back to the parking lot was way easier as you were mostly going down, which is why some people were even running down the hiking trail.

It is not strange that my legs were still hurting 2 days later, as it took us 5.5 hours to get to Garibaldi Lake and to get back to the car. It was definitely worth the pain and time though and I would surely recommend it to everyone who is visiting Canada.

I hope you all had a great weekend and I am looking forward to hearing all about it on PuB NiGHT!

What a nice variety of food we had last night at one of Vancouver’s most beautiful places: Queen Elizabeth Park! 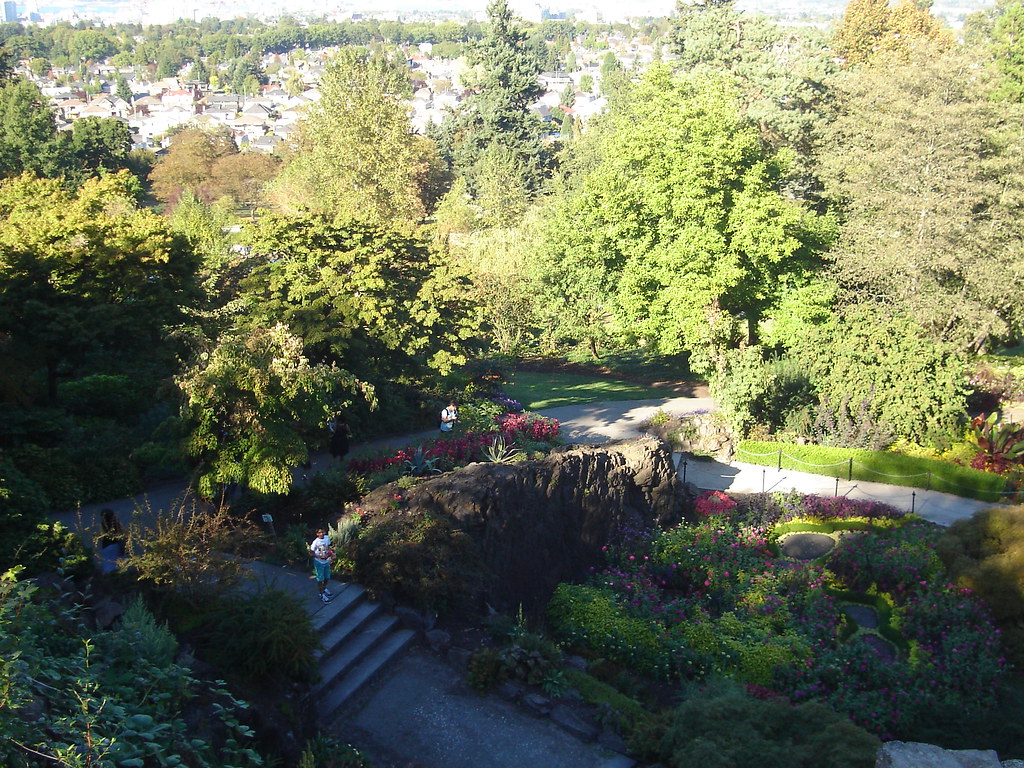 There were pancakes made with bacon inside, fruit, Lebkuchen, dumplings, meatballs, deviled eggs, salad and the list goes on. We really had many things from many different countries!

After stuffing ourselves we played ball, chatted and laughed a lot.
By the way, does anyone know of the game “Brännboll”, a ballgame commonly played in Sweden? We discovered that our Germans know it as well. It’s just spelled differently: “Brennball”.
We played it until sundown but finally packed our things when the mosquitoes threatened to eat us alive.

We had a great time and it was definitely a nice alternative to our regular PuB NiGHTs. What did you guys think?

Have a nice long weekend everyone! And look forward to our review of the Whistler Day Trip we’ll be on this Sunday! It’s going to be hella awesome!

The sun is finally giving its all again. Which is why we decided to take it outside!

We’ll have a picnic/dinner at Queen Elizabeth Park on Thursday, July 30th at 7pm. The location is the picnic area (northern part of the park). 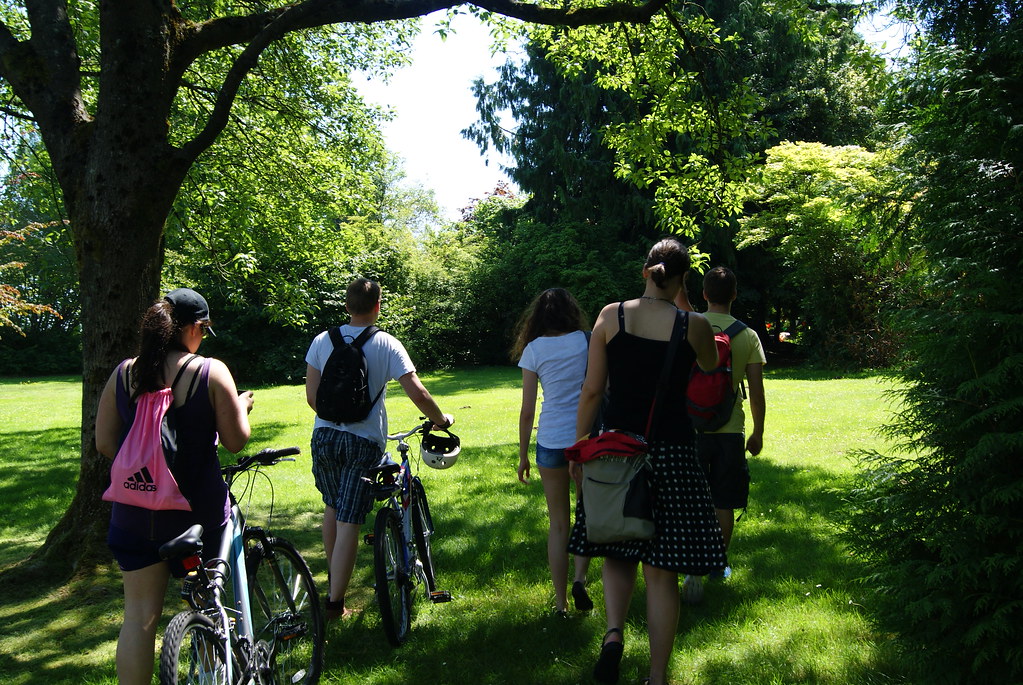 Let’s try something interesting!
Bring a small home-cooked specialty originating from your own country. And if you don’t have your own recipe, just call your parents or grandparents for one!

Of course some of you don’t have the time or opportunity to make a meal, so bringing snacks or something from the store is also fine – as long as it reminds of your home country!

Don’t forget the blankets/towels to sit on and maybe you even have a Frisbee or an cool game we can play.

Enjoy the rest of the week and see you this Thursday!