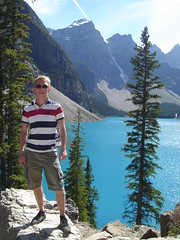 So, my time has come to say goodbye and hopefully I’ll see you again some day. I’ve had a fantastic time here in Canada, and sharing my experiences together with awesome people just made my experience even better.

Of course I want to say thank you to a lot of people. Thank you to Tim who gave me this great opportunity to work for INTERNeX, and who together with Simon and Mina supported me all the way through my time here. A big thank you to everybody at the INTERNeX office. I’m truly amazed by the efforts you’re doing to give everybody their ti 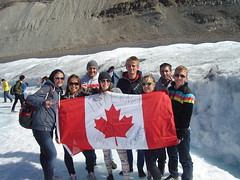 me of their lives. Thank you to Alexandra and Selina for introducing me to my different tasks and thanks to Sophie for your great help. And of course thanks to all of you guys who participated in all the different INTERNeX activities… you’ve given me experiences that I’ll never forget! I hope that I’ve been able to give you something in return. I feel truly lucky to have found INTERNeX. I can’t believe how much I’ve gained both professionally and personally during the last couple of months. 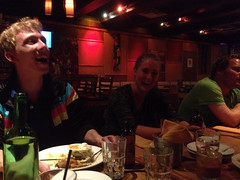 I’ve travelled to a lot of different countries before, and I’ve also tried to lived in another country before I arrived here in Canada. I can definitely say that this country is like no other I’ve visited. My first trip to the Rockies showed me how beautiful this country is. Stunning mountains, lakes and waterfalls. And I’ll never forget Vancouver. This city really has it all: nice beaches, lots of great events to see and activities to do, and the great outdoors is just around the corner. And with another trip to Portland I also got to see the US. Watching hockey matches, basketball matches, d 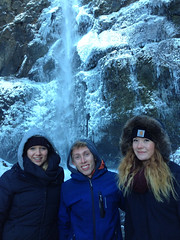 oing stand-up paddling around Granville Island, watching a couple of crazy and entertaining parades, and not to forget all of the pub nights and much much more. What a fantastic time I’ve had here!

Once again thanks to all of you who have given me a great time here, and thanks to Julie and Lina for overtaking the arrangement of the pub nights for the next period of time. I’ll bring all of the great memories with me back to Denmark, and hopefully we will meet again somewhere, someday… who knows 🙂 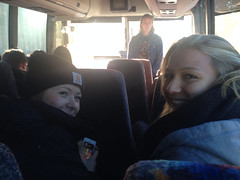 Aaand we’re back from our fantastic Portland trip. Here’s a little review of the trip. We went off from Vancouver bright and early at around 7:15am, Friday, November 14th. It didn’t take long before we reached the US/Canadian border where we had to go through the security control. Our bags were scanned, the border control officers needed to scan our fingerprints, and we had to fill in a slip including personal information. Luckily we got through the control pretty fast. On our way to Portland we also got a quick glimpse of Seattle. 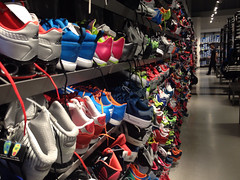 At around 4pm we arrived at the shopping mall Woodburn Premium Outlets just outside Portland. Five hours at a shopping mall sounds like a lot but actually the hours past by very fast. This mall is just massive, and perhaps there were a bit too many shops for the girls to handle 😉 Most of the shops had very good offers, so when we had to leave the mall at 9pm a lot of us arrived back to the bus with our hands full of shopping bags. Sometimes the selection was just overwhelming… just look at all the colourful shoes at the picture. Hmmm, what to chose? 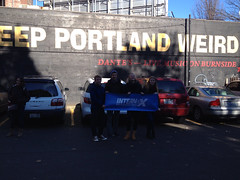 The next day we headed to downtown Portland where we had a little sightseeing tour. The slogan for this city is “Keep Portland weird”, and the weirdness of this city was something we quickly noticed… the citizens of Portland definitely want their city to be like no other. After our little tour around the city, we had some free time to walk around and discover what this city has to offer. Most of us went to the Voodoo Doughnut store. We were lucky to arrive a bit early. It’s not unusual that 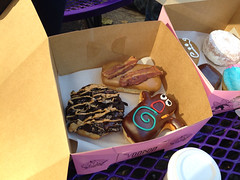 people wait in line for a least 1 hour! And of course there’s a reason for the long line… the doughnuts here are amazing and comes in all kinds of shapes and colours. Some people just couldn’t get enough, so they bought several boxes filled with doughnuts.

After a great time at the Voodoo Doughnut place, we continued shopping around Portland. Most of us also went to a big Apple store. There’s no sales tax in Portland, so everything is just sooo much cheaper compared to Vancouver and Canada in general. 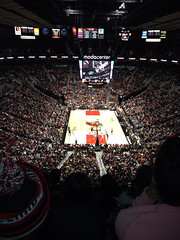 In the evening we went to watch a great NBA match. It was the Portland Trail Blazers against Brooklyn Nets, and of course Portland won 🙂 The match was very entertaining but the energetic crowd and the entertainment during the breaks just made this match an awesome experience! There really was no limit to the craziness… There was a trampoline show, a big inflated car was flying around the stadium and dropped off coupons, small kids cycled around the basket court in a competition to win a weekly Happy Meal for one year at McDonald’s… No wonder why there are so many big Americans, hahaha! After the match some went downtown to party. Others stayed at the hotel to try out the hot tub and the warmed up swimming pool, niiiice 🙂 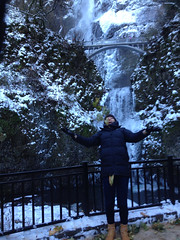 Sunday morning we headed off from our hotel at around 9am. We didn’t have to drive for long before we arrived in front of the 2nd tallest year-round waterfall in the US, the Multnomah Waterfalls. It was very cold and windy but the view of the waterfall was just incredible! We had some time to walk around the trails around the waterfall… it was a bit icy, so you can imagine that we had lots of fun trying to keep the balance.

After visiting the waterfall we hit the road back towards the US/Canadian border, got a bit to eat and did a bit of tax free shopping… of course,  and then went back to Vancouver.

Thanks to everyone for a great trip, and thanks to our driver Bruno and our tour guide Adam for making this a superb trip. What an amazing tour!

Check out all of the pictures from this awesome trip here. 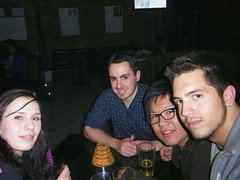 Hey everybody. Guess what, it’s time for another pub night… Yaaay! This time we’ll meet at The Metropole Community Pub. And of course we’ll meet at 7pm as usual. It’ll be a chance for you who couldn’t go to Portland to hear about this great trip.

Aaand once again we’re going to a nice pub where the food is good but the prices won’t kill your monthly budget. Prices on food don’t get above $9.49 but it’s up to you whether you want to top up your dish with add ons fo

r a few extra Dollar. The daily special features a burger and a beer (Granville Island draught) for just $6.49! It doesn’t get any cheaper than that. Click here and get an overview of the full food and drinks menu.

The Metropole is located at 320 Abbott Street, only 600 metres from Stadium-Chinatown Station and 550 metres from Waterfront Station. You can sign up for the pub night here.

Looking forward to see you for another fun pub night. 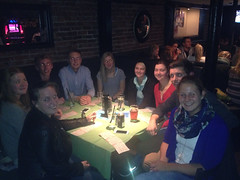 Yesterday we had our great weekly pub night. This time we visited The Beaver on Granville Street. We got a small table but it wasn’t a problem to fit all of us people into this small space 🙂 Most of us tried out some of the nice food. The beers weren’t bad either and all of the locally brewed bottled beers were served for quite reasonable prices… only $5.50. A lot of people were fitted into this little pub, and of course they were all ready for the bingo evening. The Beaver is situated at the ground level of the SameSun Hostel, so there are always a lot of different activities going on at this pub. Of course we were also up for playing bingo. Aaaand this time we were much luckier than last time we played. Yep, that’s right we did actually win something. We won a good deal of beer but it would have been nice to win one more time, since it took a very good deal of beer to share between all of us. 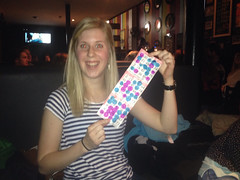 Thanks for a very good evening. It was great to see so many of you defying to let the cold weather make you stay at home. But for sure the temperature inside the pub wasn’t bad either 🙂 And looking forward to see those of you guys who are going on the Portland trip… It’ll be awesome!

Click here to view a few more pictures from the pub night. 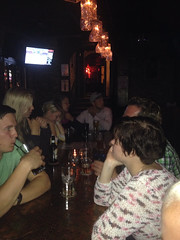 It’s time for another cool and cozy pub night. This time we’re going to The Beaver at 1018 Granville Street. You can look forward to nice and affordable food… all burgers and all mains for just $9.95! Is that a good deal? Oh yes it is. The daily special is spaghetti bolognese with parmesan and garlic bread for $4.99. The daily drink special is a pint of Russell Pale Ale for $5.25. And all the domestic bottled beers are nicely served for you at the price of just $5.50. Have a look at the food menu here, and check out the drinks menu here. The Beaver is located at the ground level of the Samesun hostel, so don’t be afraid when you see the Samesun logo above the entrance. No need to worry, you’ve arrived at the right place. Of course a lot of the people staying at the Samesun hostel are visiting The Beaver, so you’ll most probably see a few young internationals 🙂

The Beaver is located conveniently in downtown Vancouver only 550 metres (6 mins walk) from Vancouver City Centre Station. Hope to see a lot of you for another great pub night. You can sign up for the pub night here. 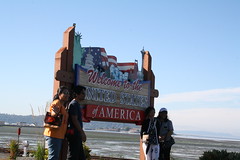 And remember we’re getting closer to the Portland trip. You can also make your payment at the pub night but remember to bring exact change ($229 for the trip + $30 if you want to watch an NBA match). The INTERNeX office will be closed on the public holiday Remembrance Day, Tuesday. But we’re open for payments today and Wednesday. Read more about the trip here.