Yesterday evening was an amazing night

for all of us and especially for me. I have never seen an ice hockey game before and I guess for most of you it was also the very first time you saw an ice hockey game here in North America. That’s actually a chance you don’t get that often. In addition to that I got to know all of you and I had the chance to talk to some of you. I hope we will enjoy a lot more events and trips together.

But now back to the game last night. Unfortunately the Canucks lost their second pre-season game without a goal although they had much more chances to shoot a goal than the Sharks. However I would say we could be happy to join at least one match of the Vancouver Canucks during our time here. It was just such an amazing feeling to be part of it (although I didn’t get and still don’t get the rules).

What I can tell you, but only because I did some research is that, there is an overtime period,

which takes five minutes with 3-on-3 hockey players. If the score is tied after this overtime, it results in a shootout. But as we all know the score wasn’t tied so we couldn’t see a shootout. But that doesn’t matter because there were so many other things to see and to experience. For me it was a gorgeous start to my time here in Vancouver. I hope they will play better during the regular season. 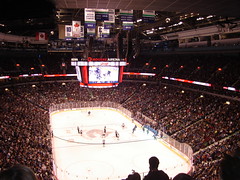 Last Saturday we had a great evening by watching a hockey game here in Vancouver. It was the last pre-season game this year and the Vancouver Canucks played against the Edmonton Oilers. After a few Minutes Vancouver did already the first goal and again after a few Minutes they did their second goal. So it seemed the game would be very one-sided and Vancouver would win for sure. But then the game turned and Edmonton did one goal as well by playing really not bad anymore. The game turned from one-sided into suspenseful and we followed the 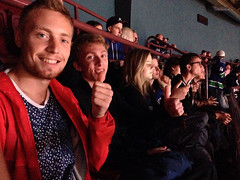 game passionately.
The atmosphere was great, so even ,if you don’t like hockey, it’s a lot of fun. During the breaks they threw Canucks-shirts into the crowd, filmed people, who were dancing or did other funny things and played good music. The audience did a la ola wave and cheered the Canucks on. Apart from the game there were so many things and people that entertained you…it was really not possible to get bored.
At the end the Canucks won by three goals to two…YIHAAAA!! 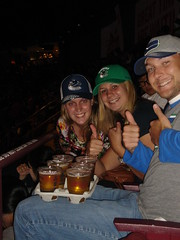 Since it was still early for a Saturday evening we went out to the Doolin’s Irish Pub to enjoy some more beers.
See more pictures of the evening here.

Hope all of you have a great start in this week and we see you on wednesday at the PuB Night.

Join us for a great movie evening next Saturday here.