Wow…How is it possible that my first week is already over? I was able to collect so many new impressions and I kind of still can’t believe I’m in Canada now. But I am really relieved and glad that my jetlag wasn’t too bad. That’s why I’m ready to explore Vancouver and if you don’t have any plans for the weekend yet you should keep on reading as I’m giving you some ideas what you can do in the next few days. 🙂

Tomorrow is gonna be the first INTERNeX trip I planned for you guys and for this occasion I chose Granville Island. I think it’s good to start with and it’s supposed to be one of the must-go places while being in Vancouver. The main reason why lots of people go there is the public market where you can get loads of food. Besides fruits, fish, cheese and more we can check out several shops. I also got the hint to try out “salmon candy” – it’s a must for all fish lovers! (Even if I don’t like fish at all, I’m thinking about trying it out!)

We meet at Yaletown-Roundhouse Station at 2:30 pm and afterwards we’re going to take the aquabus to get to the island. So I hope to see some of you tomorrow!

Another event you can check out this weekend is the Vancouver International Dance Festival. It celebrates its 20th anniversary in march and offers lots of shows and dance classes. Some of them are even for free. If you’re into dancing this might be something for you!

For those of you who just feel like going for a relaxed walk – you should check out Queen Elizabeth park. It’s a nice spot to explore some gardens or just catch some views and I guess it’s a good place to watch a sunset.

Have a wonderful weekend!

The weekend is upon us, and if you still don’t know what to do the next few days, here are some suggestions. Foodies pay special attention, because this weekend you will have a few opportunities to get some amazing food.

Saturday is the NOSH Foodie Fest in the parking lot of the Capilano Mall from 11 am to 6 pm. There you will be able to find seven food trucks to satisfy your taste buds. And even better, the admission is free.

Another event to consider on Saturday might be the 60th anniversary celebration of the Vancouver Maritime Museum. The celebration will be from 10 am to 9 pm and will include live entertainment and attractions. The admission is free.

On Saturday and Sunday are the Philippine Days 2019, which are being held at Waterfront Park in North Vancouver. This outdoor festival offers loads of Filipino culture such as authentic cuisine, live performances as well as parade demonstrations. There will be over 75 food and merchandise booths at the park sharing their culture with you. The event will be on Saturday from 10 am to 6 pm and on Sunday from 10 am to 5 pm. The admission is free, but it is advised to bring cash, to pay at the booths.

You can also join us on Sunday in Queen Elizabeth Park for some Disc Golf, where we will be able to explore the Park and enjoy a nice game with friends. We will meet at Vancouver City Center Sky Train station at 12.20 pm or you can also meet us directly at the Little Mountain Disc Golf course at 1 pm. Wear comfortable clothes and bring some water. Hope to see you guys there!

On Sunday is the Italian Day 2019, where everything Italian will be celebrated. The event will be held on Commercial Drive, which will be car-free zone for that day. You will be able to find over 120 merchants, food vendors and entertainment at the event. Just to give you an idea of the size of the event: 300,000 attendees are expected. The event is from 12 to 8 pm and the admission is free.

I hope you have wonderful weekend!

After shutting down the computers at the office on Friday afternoon, the weekend could start. We decided to behave like real Canadians this night, which means only one thing: watch hockey! So, Nadine and I headed to the sports bar Malone’s to meet some of you. At the moment, the playoffs of the Stanley Cup are broadcasted literally every day and as you can imagine, the pub was crowded. Everyone was following the intense game of one of the two Canadian teams in the competition, the Winnipeg Jets. Some fights later, we as well as the Jets could celebrate. We took it easy and called it a night after a few drinks.

The view outside the window on Saturday morning did not seem that promising. Time to escape cloudy downtown and take a walk in a tropical forest. That is possible in Vancouver? Yes! The Bloedel Conservatory is located right at the Queen Elizabeth Park. It feels like entering another world, warm and colourful. While walking around, Nadine, Angy and I could spot many exotic birds and plants. All information about the beautiful parrots and trees are mentioned in a guide that you receive when entering. Outside of the conservatory, I could enjoy a beautiful view of Vancouver and a little park with many flowers that are starting to flourish now. At the other side of the park, the preparation for the night began.

We planned to visit the event that was happening later: the Spring Light Festival. As it was still too bright and early, we used the time to visit the Oakridge Mall, before heading back to the park. Lucky as we were, it started to rain the moment we walked out of the mall. However, we were happy to meet some of you hiding under your umbrellas. We followed the path that was guided by lights in all kinds of ways. It was nice to see the cherries and lanterns highlighted in colourful spotlights. After a while, the ground became all muddy and we were completely soaked, so we decided to warm up again. Famous place to do so is the pub Bourbon where we danced the night away.

I admit that it was quite tough to get out of bed on Sunday morning. But there was a good reason to leave the house again. Of course, I wanted to meet you for our tour in the Rogers Arena. A guide welcomed us in the empty hallway and we entered the heart of the stadium. But something was different than the last time I was there to see a game of the Canucks. There was no ice! Since the season is over, it already got removed so that the concert season can start. The tour continued to the media and press box, the hall of heroes and the luxurious suits. As a highlight of the tour, we could even enter the locker rooms of the guests (quite basic) and the Canucks (not basic at all), where we could still spot the gear of the famous Sedins. I was impressed by the diverse places you can see a game from and the huge organization behind the scenes. Since everyone was hungry after this exhausting tour, we visited Malone’s again for lunch and hockey, of course.

I had another great weekend with many of you! See you Wednesday at Steamworks Brewpub for our weekly PuB NiGHT!

Today is Friday, which means it’s almost weekend again! And guess what? It’s supposed to be another rainy weekend in Vancouver. Luckily, there are plenty of activities that can be done indoors. So, here are my suggestions for the weekend. 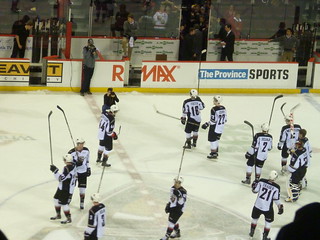 Listen up hockey fans: the Stanley Cup is on. There is a total of 8 games to watch during the upcoming two days. Four on Saturday and four on Sunday. But where? Well, you could go to one of the many pubs that are screening the games, for example the Lamplighter or Malone’s. Or you could invite your friends to your place, have cold beer and chips ready and watch it on TV or on your computer via cbc.ca. 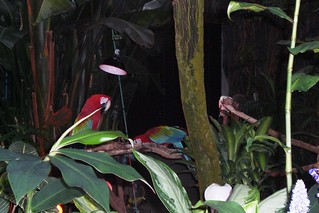 For those that would like to enjoy some nature, but do not want to be outside in the rain: no worries! There’s a solution for that problem too. The Bloedel Conservatory is then the place to be. Within the dome, you can find three different climatic zones: Tropical, Subtropical and Desert. In total, you can find more than 120 free-flying exotic birds and more than 500 exotic plants and flowers. Enjoy the warmth and the beautiful nature on both days (and any other day of the week) from 10am until 5pm. The entrance fee is $6.50 only (tax not included).

And for the tough cookies of you that want to be outside no matter what: The Spring Lights Illumination is taking place in the Queen Elizabeth Park on Saturday evening only! Many projections and a walkthrough experience are awaiting you from 8pm until 10pm. The best part: the entrance is free!

Enjoy your rainy weekend and I hope to see many of your faces at the Rogers Arena Tour on Sunday! If you didn’t sign up, but would still like to join, just meet us at 1pm in front of the Canucks Team store which is located at gate 6! See y’all!

Hello, bonjour and hola! The weekend is just about to start! As some of you cannot join our weekend trip to Salt Spring Island, you might want to get some inspiration on what to do on the weekend in and around Vancouver. The weather forecast seems promising, so why not exploring Vancouver’s nature and getting some fresh air?

First of all, there is of course the famous Stanley Park, a must-see for everyone in Vancouver. You can just take a walk on one of the many trails passing through the 400-hectare natural oasis. Enjoy the scenic views of water, mountains, sky and majestic trees along the Seawall and spot the many landmarks that are hidden in the park. Stanley Park is easily reachable by public transport.

Once you are already in Stanley Park, you can also visit the Vancouver Aquarium. Sea otters, sea lions and 50,000 other aquatic creatures are waiting for your arrival in Canada’s largest aquarium. It offers an amazing experience with a wide array of great animals. The admission fee is $39 for adults and $30 for students.

Another park is the Queen Elizabeth Park located in South Vancouver. It is situated on a little mountain, the highest point in Vancouver proper. From there, you have a great view over the city. Tipp: Visit the park in the evening to enjoy the sunset.

Last but not least, there is another highlight of Vancouver: The Capilano SuspensionBridge. This bridge is crossing Capilano River in the District of North Vancouver. It is 140 metres long and 70 metres above the river. Take your camera with you, because the famous bridge is an awesome photo spot. To enter the bridge, you have to pay a fee, but it is definitely worth it. The ticket is valid for an entire year, once you have purchased it for $43 or $34 (students). You can reach the park easily by bus.

Whatever you are up to, enjoy this weekend to the fullest!

See you on Wednesday at our PuB NiGHT!