Last Friday we went with a group of 17 people to the Latin Dinner at La Casita on West Cordova street. 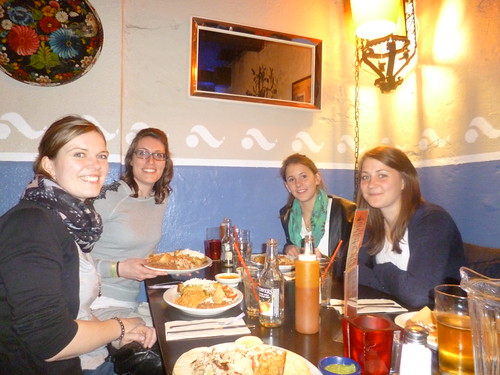 The restaurant was packed when we came and we were seated in the basement, which was really cozy. We had a table which is normally for 14 people, so we had to squeeze together, but still we had enough space to move without hitting each other. The nice thing about sitting so closely is that you do not have to yell over the whole table to talk to someone. 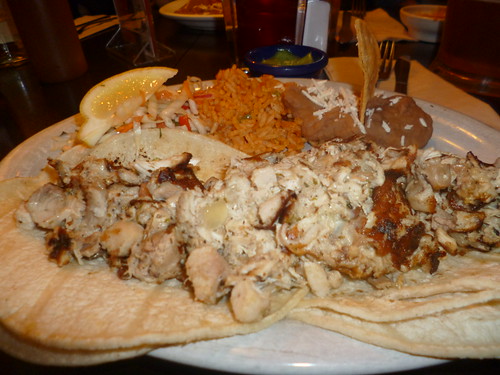 We started the night with ordering some nice drinks such as, Sangrias, Margaritas, Ciders and beers. After our first round of drinks it was time to order our food. The menu offered; burritos, 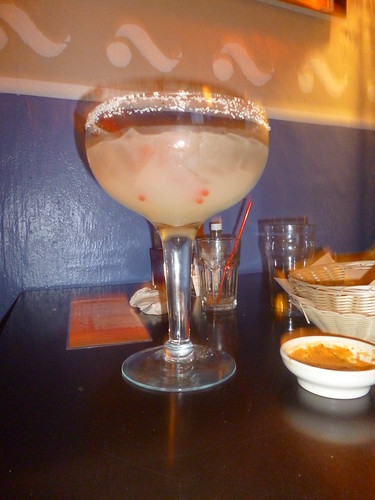 tacos, enchiladas, flautas and many more. Mostly you could then choose for beef, chicken or fish. Of course also for our veggies there was an option, the veggie enchiladas.

It took the kitchen crew around 10 minutes and than our food was served, which is pretty fast. The plates looked all delicious and were filling. We even got a free round of tortilla and with two sauces. After everyone managed to eat their food without spilling it was time for our last round of drinks. The German/Belgium girls ordered a Super Margarita for three persons which came in a pretty big glass! 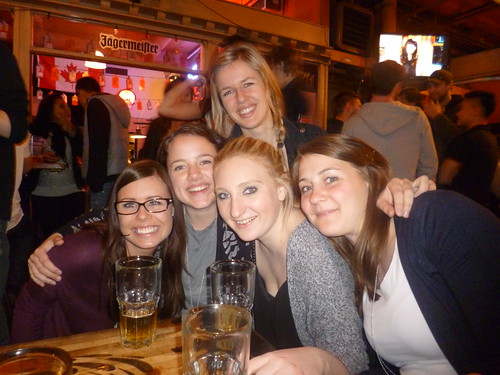 We ended our night and some of us headed towards their homes and others to the Cambie for an after drink, which ended up in more after after drinks.

We hoped you all enjoyed the dinner and that you will join us for our Pub Night on Wednesday. We will tell you tomorrow in which pub we will meet this time.

See you at the Pub Night!

We always say that Spain is different, and that’s true, is different. We have one of the best cuisines of the world, sunny days, beaches, big cities, small villages and nice people. Before the crisis started Spain was a complete paradise to live, and I am sure it will be again after a few years. We just need to be hopeful again.

Well Spain is different, but Spanish as well. How can you identify a Spanish people? Basic guide:

I realize during my days at INTERNeX office that the English level of the young European people is super high, especially if I compare with ours.

In Spain we translate all the foreign films besides we have a huge film and music industry in Spanish language so we really don’t have the “real” need to learn English, not if you stay in Spain.

Of course we study English at the school and nowadays we all enjoyed going abroad to “learn English”… but that’s another big problem…everywhere a Spanish go, there are tons and tons of other Spanish speakers, so is kind of funny going to London or Dublin and party with another Spanish there, but useless if you really want to improve your English.

On the other hand it’s true that we are lucky, Spanish is the third most spoken language in the world and it’s a value added forever for our resume and we can always travel to a lot and lot of countries, like the most of South American’s countries and have a complete conversation with the local people, which is pretty cool!

It’s true that the vocabulary is pretty different in each country but we can understand perfectly each other (or almost the most of the times:))

You can have an advance level in English living in Spain and then when you travel abroad, you will say what??What are they saying? Is that English? It’s kind of desperate in the beginning, but at least in Vancouver we are kind of lucky because the people find our Spanish accent cute (Thank god)

I mean everybody has their own accent and their own way of speaking, but almost all the Spanish people you will meet, you will recognize it easily.

I guess they are right, Spain is different, and us as well.

Oh what a long post, hard work… I need a siesta right away!

Yesterday we all met in the fancy Cactus Club Café in Yaletown!

There were a lot of people and new faces! Which is always great because here in Vancouver everybody leaves but new people are always coming too! And a lot of people brought their own friends! The more people, the more fun!

The venue was really cool, with a chic decoration and they had really good cocktails! They have a good specials too so it wasn´t as much expensive as you can imagine when you entered there!

I ordered Sangria and was the first place in Vancouver that Sangria tasted like real Sangria! Yep! No more peach juice with white wine! The real Spanish Sangria exist in Vancouver!

It was the last pub night of our great PR INTERNeX intern Xenia! She has been here for a couple of months but we all miss her sooooo much! I really don´t know what I will do without her in the office and in general in Vancouver! I will miss you so much! Katie and Petra left too

It is always grateful being with you guys! And seeing more and more people every week is great!

Thank you so much!

So now that I am done all my final exams and papers I have started to put together a list of all the places, activities, foods, etc I am determined to do/try. Once I have completed these items I will let you know about them and give you a little bit of an introduction to these list items and perhaps you could try them yourself!

1) Number one on my list, surprise surprise it involves food. As some of you know today is my 22nd birthday so I have taken the entire day off to celebrate and I am filling it with all the things that I love. Starting off the day with a nice session at the Steve Nash Gym cause I am going to be indulging in some serious treats and I want to feel guilt free when I do. After my gym session I will be heading over with some of my friends to the Medina Cafe located downtown at556 Beatty Street, between Pender & Dunsmuir.

This quaint little cafe is known around the city for its unique bistro-inspired food served simply and conveniently in a comfortable, chic environment reflecting the lifestyle and desires of the neighbourhood and Vancouver at large. Medina provides a fresh and eclectic alternative with a pioneering attitude towards café culture.
Sister to neighbouring night time hot spot Chambar, Medina is a quaint café serving connoisseur-savvy coffee, Belgian waffles for sweet sustenance and a full breakfast, lunch, and brunch menu comprised of eclectic dishes created by co-owner and chef, Nico Schuermans.

When I go later I will for sure be trying their infamous Lavender Latte, will let you know how it goes!

2) The other week after my last final I headed out with one of my good friends to just have a great meal at one of Vancouver’s best kept secrets. Locate on the vibrant Davie Street at 1326.

This small Mexican Restaurant boasts some of the best food in the area and offers some reasonably priced menu items. I recommend starting off with the guacamole dip which comes with several layers of flavorful dips and a side of oven baked tortilla chips. Oh and of course you need some drinks to start the whole thing off!

Lolita’s is famous for its pint sized sangria cocktails filled with lots of tropical fruit to sink your teeth in. I might have had a few of those so I highly recommend those, they make you feel like your sipping them somewhere tropical. Its nice way to temporarily escape from your realities. After the appetizers, we moved onto the main course and we decided to share the halibut tacos…yum! After that meal were stuffed but the atmosphere was just so relaxed that we ended up staying there for a few hours. This restaurant is a little hidden so keep your eyes out for it! Great place for a date night too *winkwink*