Last but not least the fourth quarter of 2015. I hope you guys had as much fun as I had looking back on all the awesome things we did.

October started with our amazing overnight trip to Whistler with a group of 22 people.

The trip was the perfect opportunity to get to know everyone better and I must say that those people are just amazing. Therefore it’s no surprise that we had an awesome time in Whistler with a lot of fun. Additionally we were pretty lucky with the weather.
The sun was shining the entire weekend. On Saturday and Sunday most people did zip lining, some did bungee jumping and some just explored the amazing view on top of the mountains when hiking. We also had two birthdays to celebrate that means we had a good excuse to party.

Canadian Thanksgiving, one of the most famous holidays is celebrated at the second Monday in October. It is similar to the English and European Harvest festival, symbolizing people’s gratitude for everything given by nature or God that sustains them.

While the actual Thanksgiving holiday is on a Monday, Canadians may gather for their Thanksgiving Dinner on any day during the long weekend. The traditional dish for the Thanksgiving dinner is roasted turkey, cranberries, and pumpkin pie.In celebration of the Canadian Thanksgiving the INTERNeX group certainly had a Thanksgiving Dinner. We spent a lovely evening on top of Vancouver’s roof. While enjoying our Dinner at the revolving restaurant in Robson Street we had an incredible view down on Vancouver.

In November 11 Canada  ‘celebrated’  Remembrance Day. We remember soldiers fallen in the line of duty, especially those during World War I and World War II. The date and the time on which the festivities are taking place certainly have a special meaning: The hostilities of World War I ended officially on the eleventh day of November 1918, in the eleventh minute of the eleventh hour.

So, every year at that time is at least one minute of silence to honor all those, we need to remember. Connected to this day is also the custom of wearing a red poppy the weeks leading up to the eleventh of November. This symbol evolved due to the popularity of a poem written by a Canadian writer and soldier John McCrae, In Flanders Fields. It is one of the most famous pieces of Canadian literature and represents the emotions connected to Remembrance Day.

We could also cross Seattle off our to-do list since we crossed the border to the States for a day trip to Seattle. As you can see on the photo we had amazing weather! And not only the weather was good. We had super yummy fresh fish at Pike Place Market and quite a lot to explore in downtown Seattle.

Since a bunch of people will be here for Christmas we decided to enjoyed a nice Christmas Dinner together in association with doing Secret Santa. Besides that we also didn’t miss the chance attending at the annual Santa Claus Parade. We went to the Capilano Suspension Bridge Park seeing the hundreds of thousands of lights, the ‘German” Christmas Market and to the Bright Nights in Stanley Park.

December and also 2015 are slowly coming to an end as well as my practicum here at INTERNeX. No reason for freaking out, being sad or becoming desperate though! Vivien, one of our candidates is taking over and is managing and organizing a couple of pretty cool events and trips for January and February. Of course we also won’t leave you in the lurch on New Years Eve!

For all the upcoming events check out our Facebook page and stay turned on our social media sites.

The only thing left to say is: HAPPY NEW YEAR! Hope everyone will have a good start in the New Year 2016! Wish you all the best.

Guess what we did last the weekend? The headline is actually already revealing about what we did, right?!

Yeees; since it was my last weekend we had a Christmas Dinner in The Old Spaghetti Factory in the heart of Gastown in association with doing Secret Santa. It was so much fun!
Especially after unwrapping the gifts everyone was even more intended on a certain gift.

Okay … First of all I should probably explain the rules. We used dice for exchanging our presents and every ‘dice-number’ had it’s own rule, for instance when you diced #1 everyone had to pass his/her gift to his/her right. That was one of the easier/more boring rules but of course we also had rules, which made the game pretty thrilling. #5 for example:

the person who diced could exchange all the presents, which means that you maybe already had your favourite gift but then you ‘lost’ your present. We played 3 rounds with wrapped presents and then another 2 with unwrapped ones. And as I already said: As soon as all presents were unwrapped everyone already had an eye on his/her favourite one and wanted to get that particular gift or wished that he/she wouldn’t get a certain gift … 😀

After the dinner we headed to The Cambie because one of my roommate had her bye-bye party there. Unfortunately the lineup was so long that we decided to go to another pub. Nevertheless we spent a very nice evening at the Steamworks Brew Pub until they closed.

On Sunday we certainly didn’t miss the chance attending at the annual Santa Claus Parade. Even though it was rainy and cold it seemed like all the volunteers and participants had a lot of fun entertaining all the spectators.

The Parade has more than 3,500 participants, over 400 volunteers and attracts around 300,000 spectators to downtown Vancouver every year. More than 60 marching bands, choirs, festive floats, and community groups featured this year’s parade. It’s also one of the largest food and fund raising events for the Food Bank. Since 2004, the Parade has collected $141,800 even though they don’t charge you any admission fee. In my opinion that’s quite impressive, don’t you think?

It’s weekend again and it’s the first weekend of December, so of course we’ve also included some Christmas events worth visiting. Let’s just call it a Christmas special. December is always an expensive month, so these suggestions will help you get through December without getting totally ripped. 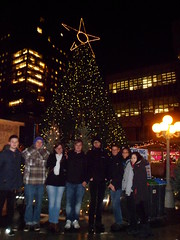 This Friday, December 5th, a big Christmas tree will be lit up by 64,700 light bulbs! This will happen on Jack Poole Plaza in downtown Vancouver right next to Vancouver Convention Centre. It’s the 8th consecutive year that this event takes place, and it’s being said to be bigger than ever. Imagine the Rockefeller Christmas tree in New York… this will be something similar, so there’s definitely something to look forward to. The event will also put focus on the improvement of the mental wellbeing of children and youth. And it’s for free! Click here to get more information. 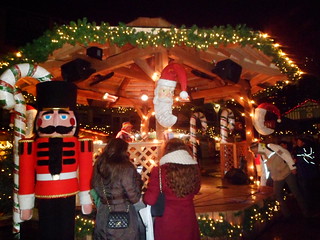 A lot of great markets are open during December, and luckily most of these markets have free entrance. Go to the Lonsdale Quay Christmas party in North Vancouver. Here you can buy special Christmas presents, you can enjoy live music and of course you can also visit Santa Claus. Check out this site for more information.

Another free event is taking place on Sunday, December 7th. It’s the River District 2014 Winter Craft Fair. Here you can support local artisans and do your Christmas shopping. Ok, so it’s not totally free in case you choose to buy something but you’re not getting charged any annoying entrance fees. Aaand of course it’s up to you how much you want to spend. Check out the location and get more information here.

Finally on Sunday, December 7, it’s time for the Santa Claus Parade. Get ready to watch this massive parade together with around 330,000 spectators!  Of course it’s for free. The parade includes more than 3,500 participants and has 65 marching bands. The parade will start at 1pm in downtown Vancouver. Click here to get more detailed information on the route of the parade.