The weekend is behind us, so let’s take a look at what we did this weekend.

On Sunday we went on a trip to Joffre Lakes. We left Vancouver at around 8 in the morning in our own bus, which was great as we could listen to our own music. On our way, we stopped at Shannon Falls, which is the third highest waterfall in British Columbia. Thus, you can imagine, that it was quite impressive. On our way to Joffre Lakes, our guide, Corey, pointed out some interesting facts along the way. For example, did you know, that the McDonald’s in Squamish is the busiest McDonald’s in British Columbia?

It was a sunny day, so we had the perfect hiking conditions when we arrived at Joffre Lakes. The Lower Joffre Lake, was close to the parking lot, so we were able to get there within 5 minutes. It was nice and peaceful. After a few minutes we headed towards the Middle Joffre Lake, which was 3 km away. I think, I can speak for most of us, that this was the hardest part of the hike. Not only was the hike 3 km long, but it was difficult due to the extreme incline. So by the time we reached the Middle Joffre Lake, we were a bit exhausted. At this lake, we had our lunch break and enjoyed the amazing view of the blue water of the lake.

Afterwards, we headed to the Upper Joffre Lake, which thankfully wasn’t too far away. On the way there we saw an amazing waterfall from up close. At the Upper Joffre Lake, we were happy to see that it wasn’t frozen. Again, we had a spectacular view and we seized the opportunity to take more amazing pictures. The hike back down was a lot easier.

On our drive back from Joffre Lakes, we stopped at Whistler for a dinner break. It was cool that we were able to see Whistler Village on this trip as well. After our delicious dinner we headed back to Vancouver. But we had to make one quick stop on the side of the highway for the scenic view. By 8:15 pm we were back in Vancouver.

Overall it was a great trip, even though it was a little exhausting at times. I hope you enjoyed it as much as I did. Thanks to everyone who joined!

Have a good day and see you on Wednesday at Pub NiGHT!

Only one… two… three more days until we are on our way to Squamish! Although you already know what we are going to do, let me provide you with some more details.

We will meet at 7:45AM at the Pacific Central Station (1150 Station St) in Vancouver. We will arrive in Squamish at approximately 10:00AM. Then, we will walk for an hour to the base of the Sea to Sky Gondola where we will start our hike. The hike will last three hours and is filled with beautiful nature, amazing views and there will be time to enjoy a little picnic. At the end of the hike, we will be on the top of the Sea to Sky Gondola where we can find the Summit Lodge. The perfect place to treat ourselves to a drink and celebrate we made it!

After that, it is time to go to the next activity: the Sky Pilot Suspension Bridge! The suspension bridge is 100 metres long and gives visitors a breathtaking view of the Sky Pilot Mountain and Howe Sound. When we have had enough of enjoying the sun (although honestly, could we ever?), it is time to take the gondola down again. But no worries, the trip is not over yet! When we are back at the base of the gondola, we will walk for about 20 minutes to have a look at Shannon Falls Provincial Park. Fun fact: Shannon Falls is the third tallest waterfall in British Colombia!

After visiting the waterfall, you will have the opportunity to have a Subway/A&W/McDonald’s (or bring your own) dinner before we head back on the bus. We will arrive in Vancouver at approximately 10pm. The day will consist of a lot of walking, however, it will all be worth it! According to the weather forecast it will be 26 degrees that day so don’t forget to bring your sunglasses and sunscreen! Also, make sure to bring enough food for the picnic and water to make sure you will not get dehydrated.

I hope you are just as excited as I am! See you tonight at the Beaver Bar!

This weekend we went on our monthly trip to Whistler! We met up at Tim Horton’s at 7:45 AM, which was super early so luckily we could get our breakfast and coffee there. Since we are a big group Tess could check us all in at the same time and we didn’t have to stand in line, so we could all sit next to each other which is always way more fun than being divided. The Sea to Sky Highway was truly a beautiful view and our tour guide Gabrielle told us a lot of things about our surroundings which was a great addition. We had a stop at Shannon Falls, a beautiful waterfall in Squamish where some Twilight scenes were filmed.

After the stop we continued our journey to Whistler and we arrived there around 10:45 AM. We got a walking tour around the village and our tour guide told us where we needed to be for each activity. After that everybody went their own way. Zack, Iris, Tess, Kristina, Larissa and I went for a little walk around a frozen river, where we had some adventures in the snow. We ended up losing Tess, Kristina and Larissa, so we were having a little photoshoot with the three of us. After that we decided to have lunch at The Furniture Warehouse, one of those amazing $5 dollar for a meal places, and apparently we all had the same thought, because everyone had lunch there apart from each other.

After lunch we went to The Brewhouse, where we had a hot drink in front of the fireplace. Then Zack went off to have fun at the tube park and Iris and I went to go bungee jumping. It’s was so scary but also the most exciting thing we’ve ever done. Sarah, Merle, Sol, Pablo and Niclas went for ziplining and they had a great time too. They even got to rent a GoPro and took some amazing shots. Tess, Kristina and Larissa decided to go to the Ice Bar for a vodka tasting where they were put in $1.500 jackets to survive the cold. They weren’t allowed to lick the walls because their tongues would get stuck on there, which disappointed them a little. But luckily you can actually taste the real flavour of vodka in -32˚, so they got a whole new experience as well.

After all the activities it was time to get on the bus back to Vancouver and everybody got to exchange their stories. We had a lot of fun and judging by your stories you did too, so thank you all for joining us!

Our Whistler trip is coming closer and closer. Only a bit more than 2 weeks to go and then we are finally going to this beautiful city! Here is a small update on the schedule of our day trip.

We start our new adventure at 8 AM outside of Waterfront Station. From there we will travel on the Sea to Sky Highway to Whistler. The Sea to Sky Highway is famous for its great view along the way. So the perfect chance to make some pictures of BC’s scenery. On our way to Whistler, you will also get the chance to see Shannon Falls. We will make a short stop for some pictures at this amazing waterfall. Shannon Falls is the third highest wat

erfall in British Columbia, so you definitely should not miss out on this opportunity! Get amazed by the beautiful view and remember, this is only just on the way to Whistler. There is so much yet to come after Shannon Falls!

At 11 AM we arrive in Whistler Village and will first get a nice sightseeing tour. This way we get the full sightseeing experience of Whistler for sure! After that we will have some free time for optional activities such as snow tubing, ziplining and the peak 2 peak gondola. At 5 PM we will be heading back to Vancouver. Even though our time in Whistler will be done, our trip is not over yet! As we will be driving through beautiful scenery again, you get the chance to make beautiful pictures, but this time in the evening. So make sure to bring your camera along, as you will definitely need it on this trip. Our journey ends at 7 PM when we drive back into our amazing city.

You only got this week left to sign up for the Whistler trip, so come by the office soon to ensure your spot for this amazing trip!

Back from the long weekend! Did everyone have an amazing time and do fun stuff? We sure did! 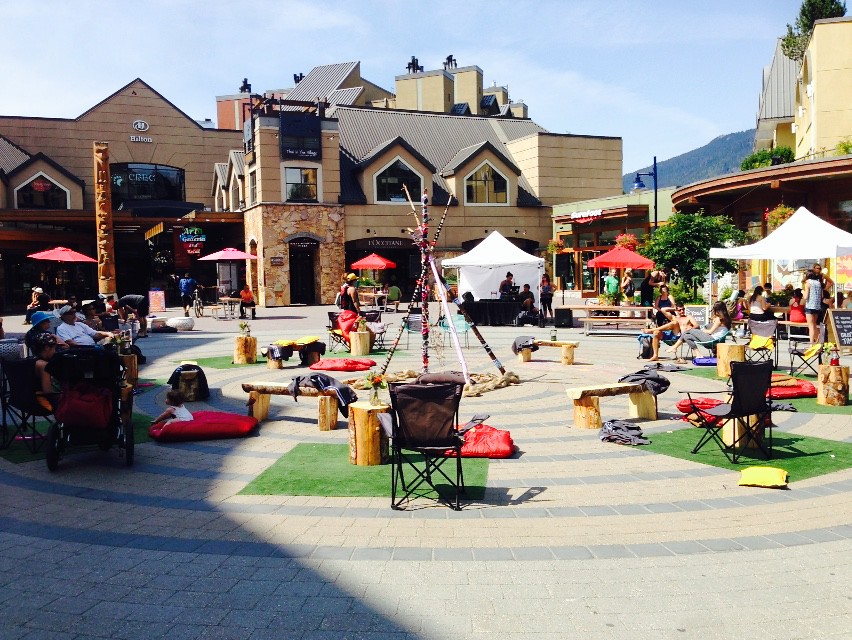 Past Sunday, August 2nd we went on a day trip to Whistler Village with West Trek. Our tour guide Madison did an awesome job!
After meeting up early in the morning our first destination took us to Shannon Falls which is located right before Squamish. There we spent 20-30 minutes checking out the waterfall before jumping back onto the bus for our real goal.
Arriving in Whistler Madison first showed us the top spots and highlights of the village before letting everyone roam free.
In our group we had 3 brave girls doing some zip-lining while the rest of us checked out the highest and longest lift in the world. The Peak 2 Peak Gondola spans over 3km between Whistler Mountain and Blackcomb Mountain with the highest point being 436 meters. Up there we were able to glimpse amazing views! 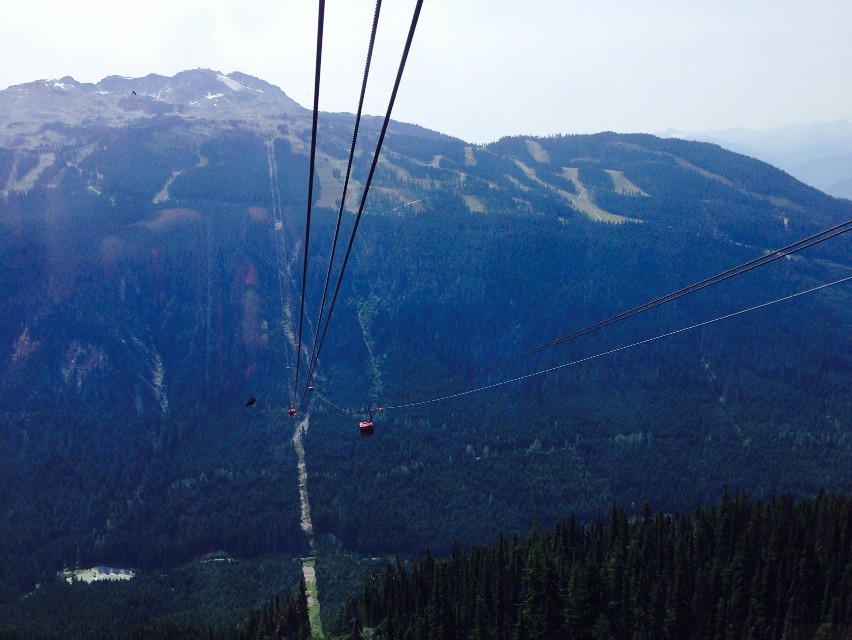 After this though we were looking forward to another point on our itinerary and that was jumping into the waters of Lost Lake. It was just perfect on a day when we had +30°C! Too bad we couldn’t stick around the lake for too long since it was already time to leave soon after. 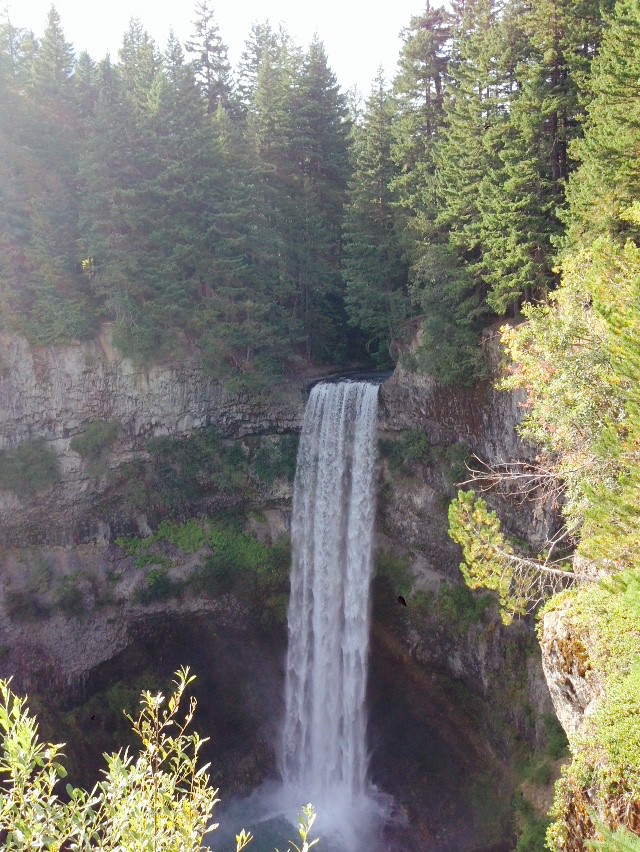 Following our departure from Whistler we made another stop but this time at Brandywine Falls. The sight of the waterfall there was even more spectacular than Shannon Falls.

We finally returned to Downtown Vancouver in the evening where everybody said their farewells and went on their own ways.
It was definitely a day well spent! Thank you to everyone joining this trip and of course a big thanks to West Trek.