It’s Friday what means that it is again time for our favourite time in the week, the weekend is coming up. Of course also this Friday we have a short overview about that, what you can do on this probably really sunny weekend in Vancouver. 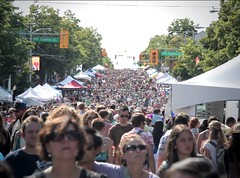 Khatsahlano Street Party
The Khatsahlano Street Party is Vancouver’s biggest Music and Arts Festival completely for free on this Saturday! This festival offers you about 40 food trucks, 50 live bands and hundreds of merchants and vendors across 10 blocks (about 1 mile). For more information and the schedule just have a look here.
As you may know, we are going to this festival together as well. We will meet us at 12:30 pm at the Esso Gas Station at Burrad Street / W 4th Avenue. We will be happy to see you there! 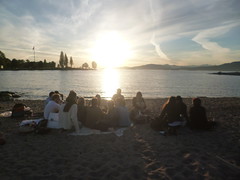 Beaches
The weather forecast for this weekend is making us very happy, it is supposed to be very warm in Vancouver, up to 27 degrees! So it will be perfect days for enjoying these days at one of Vancouver’s beautiful beaches. Mostly all of them are perfect for nearly everything you like: sports, just relaxing or tanning, swimming in the water or even a picnic at the beach. Vancouver has eight beaches which are directly at the open water: English Bay Beach, Jericho Beach, Kitsilano Beach, Locarno Beach, Second Beach, Spanish Banks Beach, Sunset Beach, Third Beach. We hope you enjoy the weather!

Soccer World Cup in Brazil
It is still world cup time! This weekend will be the last but also the most important and exciting weekend in the world cup! It time for the final on Sunday, 12 pm! Germany and Argentina will fight in the last match for the world cup trophy. Of course the INTERNeX PR-Crew is cheering for Germany, for which team are you cheering for? You should not miss the final, enjoy an exciting match and cheer for your favorite team. There are many spots where you can watch the final, it will be a great end of the world cup, even when you watch it in a city with so many nationalities like Vancouver.

We hope you will have a great and enjoyable weekend and may see you at the Khatsahlano Street Party or to watch the soccer world cup final on Sunday! Just have an amazing time while you are in Vancouver!

Tuesday is thé day to go the movies in Canada. Normally a ticket costs $12.00 but on Tuesday you can go for the movies for half price!

Telus, in cooperation with Cineplex have the ½ Price Movie Combo. For only $11.70 you get ½ price off an admission, regular popcorn and a regular drink. To check out more about the Telus offer click here

The Empire theatres offer a Reel Deal Tuesday, which means you can go to the movies for only $5.99! They also offer a Combo deal where you can get a small popcorn, regular soft drink and a Nestle treat for only $5.99!

Some of the movies now playing in the movie theaters are:

Prince of Persia: Sands Of Time

Sex and The City 2

For more information about these movies or which other movies are also playing check out these websites:

So where are the movie theatres? We have put together a list with the most popular theaters in Vancouver and the rest of Canada

Popular movie theatres in Vancouver are:

Popular movie theatres in Canada are:

I can’t wait to see some of the movies that are playing now, so you know where you can find me for next few Tuesday nights. Do you also want to see a movie but, like me don’t have anybody to go with? E-mail me at pr@internexcanada.com and see if we can get enough people together to go as a group!