Snowcoach
All the optional activities are taking place on the second or third day. On the second day we will go to the Columbia Icefields where you can choose to do the Snocoach. The Snowcoach takes you up to the Anthabasca Glacier and gives you the chance to actually walk on the glacier itself. Here you can make beautiful pictures and taste the fresh water of the glacier itself. You can take an empty bottle of water with and fill it at the glacier.

The day after you have the chance to do the two other optional activities. The first one is a bit more relaxing and a perfect activity when you would like to get some rest during this busy schedule. You can take the Lake Louise gondola up and have an amazing view over the Rocky Mountains at the top. The activity includes an all you can eat lunch buffet, so you don’t have to worry about getting any lunch beforehand. You may even see bears on the way to the top!

Emerald Lake canoeing
If you would like to do something more active then you can go canoeing at Emerald Lake. Canoe on the beautiful blue waters of Emerald Lake and forget the world for a second.

To ensure that you can do these activities you have to go to the Westtrek office and book your activity. You can also book the activity on the bus itself, but there is no guarantee that there will be spots available.

Are you getting excited about the Rockies trip? Then come to the office and sing up to make sure that you get to go on this amazing trip! 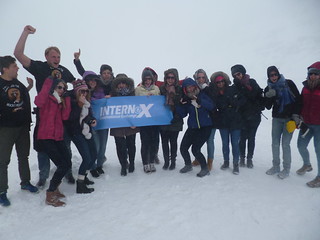 Join other travelers on a 4-day (3 night) tour to the heart of the Canadian Rockies and travel through some of the most awe inspiring scenery to be found anywhere in the world! Embark on a journey from Vancouver to Alberta to see towering peaks, frigid glaciers, and stunning lakes. Four days of breath taking scenery will give you memories to last a lifetime. Don’t have a friend? No problem – you’ll meet tons of people on this trip! For only $340.00 (taxes in!), you won’t find a trip like this anywhere else! This trip begins July 30 and ends August 2, 2010.