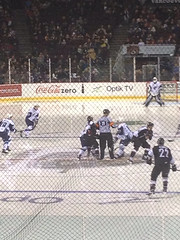 Last Saturday we went to watch a great hockey match at Pacific Coliseum. We met up around 6pm and walked the last way to the stadium. We went to watch Vancouver Giants against Saskatoon Blades. The Giants are the younger hockey players trying to get their breakthrough to the Vancouver Canucks and the NHL. So it wasn’t the Canucks, still it was amazing to see how big the stadium is and how many people went to watch the match. And the atmosphere was fantastic. We got some pretty good seats behind the goal not too far away from the ice rink. The match had an awesome start with lots of intensity. All of the players gave it all they got, and the match really had all the drama you could possibly imagine… plenty of goals, a fight between two players, extra time and finally a penalty shootout.

And we also got to experience the teddy bear toss. A lot of people had bought teddy bears at 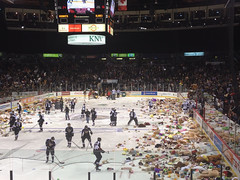 the stadium to support kids in need. So, after the Giants scored their first goal teddy bears came flying onto the ice rink. What a fantastic moment! Teddy bears came flying from everywhere and it seemed as if it would never stop. During the breaks we were entertained by small kids plying hockey and a lot of different competitions.

The final score was 3-2 to Vancouver Giants after a nerve-wracking penalty shootout. Thanks to you guys who joined in for this great match!

You can watch more of the pictures from this event here.