There it finally was: our big camping trip to lonely Vargas Island!

It started off Friday morning at Horseshoe Bay from where we took the ferry to Vancouver Island. After a short snack (or better schnack) break, we headed to Nanaimo located on the other side of the island. Even though it rained pretty hard when we arrived in Tofino, everyone was ready and excited for the adventure. So, we packed all our gear for the next two days on a small water taxi boat and after a 15-minute ride, we reached our destination: Vargas Island!

And there we were: 11 people with a bunch of gear standing on a beach on a lonely island, in the rain, watching the water taxi driver leave. Time to get active – building up tents, setting up a tarp and collecting firewood. Well, lighting up wet wood was not that easy. But our man of fire Euler was hungry and managed to get the fire started. Yeah, our barbecue was saved! Meanwhile, a crew of architects built up a tarp, so we had a place to stay without getting soaked. We spent the night staring at the campfire, eating our hotdogs and being proud of our constructions. But before everyone could crawl into the tents, we cleaned up our campsite. All food had to be stored in a food locker some metres away from the tents. This, to make our home as less attractive to wolves as possible. To be fair, the start of our trip has been a challenge, but our teamwork made it all work perfectly. Good job, guys!

I woke up on Saturday morning with the satisfying sound of someone smashing wood like crazy. Satisfying, because that sound meant there was a chance of dry wood, which meant an easy fire start and fire meant coffee. With a great team effort, our man of fire and some patience, we managed to get hot water for coffee and ‘tea wotah’ for our English man. Even Nutella was offered on the buffet – it was actually a glamping trip! As the weather forecast predicted, it stopped raining and we could finally see the neighbour islands. Really pretty!

The guys spent the morning in the island-gym, which included smashing wood in all kinds

of creative ways. Good side effect of this workout was that we didn’t have to worry about firewood for the night anymore. After lunch, it was time to explore the island. We left our home beach, hoping we could find a hiking trail. What seemed like a trail, made us end up at a cabin that looked like a horror movie scene. We continued our way along some animal traps, under fallen trees and over stones and reached some beautiful spots. After all photo shoots were done, we returned to our basecamp. The sun was out, so we played some games at the beach and the bravest ones of us even went swimming! Later on, we could spot some sea lions passing by our coast. Burgers and potatoes were on the menu for dinner, so we enjoyed those and the beautiful view.

The evening passed by quickly with games, s’mores (yes, glamping) and loads of laughs. Suddenly, someone came back from the ‘washroom’ and noticed ‘wow, there are lots of stars out here.’ And yes, he was right! I think I have never seen a sky like this before. So we were just standing at the beach, looking up to the sky and getting excited for every shooting star that we could spot. That was just a perfect ending of the day.

On Sunday, we woke up early to get our breakfast out of the food locker and to break
down our camp. Everything was packed just before the water taxi came to pick us up again. We enjoyed the sunny ride back to Tofino, where we packed all our stuff in the cars again. Then, we headed to the beach. Our instructors were already waiting for us,

ready to introduce us to the world of surfing! During a three-hour lesson, we learned how to get on the board and catch the best waves. At the end, some even managed to stand on the board like they never did anything else before. It was really fun! After this exhausting morning, we enjoyed lunch in Tofino and evaluated the weekend. Everyone’s favorite moment? Difficult to say, because there were so many good ones. Then, it was already time to head back to Nanaimo, where we took the ferry back to Vancouver.

It was a great weekend – I enjoyed this adventure with an amazing group to the fullest! A big thanks to all of you who joined and especially to our drivers Rick and Matt.

Catch up on some sleep guys and I will see you on Wednesday at Malone’s!

What an amazing weekend!! We hope you had so much fun as we had. On Saturday the 7th of June was THE day were our awesome rafting trip started. Our crazy tour guide Lee from WestTrek picked us at 2pm with a sweet van on Waterfront station up and we made our way to Chilliwack. On our way we stopped of course to get some snacks and drinks (a lot of drinks ;)) for the campfire that night.

We arrived in Chilliwack around 4pm and after we setting up our tents (which mostly we girls did!!), close to a big camp fire place, we started playing volleyball, which was pretty fun. Of course we started already drinking, so you can imagine how funny the volleyball match was. At around 6pm our dinner was ready. There was a buffet with good food, we enjoyed the food while sitting outside in the sun. After dinner we went straight back to the volleyball court and had a exiting match agains the yellow team (high school kids) which of course we won ;).

After the beach volleyball match it was time to start the campfire. We all gathered around the campfire. We spend the whole night drinking, kind of singing, looking at the stars and sharing crazy stories and watch crazy Alex falling down 🙂 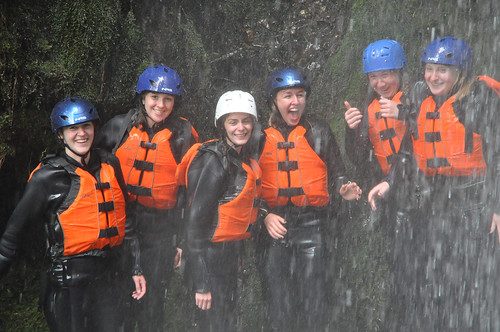 The next morning we woke up at around 8am in the morning for a great breakfast with pancakes, eggs and coffee. After a safety talk, which made everybody scared as hell, it was finally time to go Rafting!!! They brought us to the river in old retro school busses and we went on the river with 3 boats with in total about 25 people. There were lots of crazy rapids and the surrounding was stunning! After rafting for about an hour we stopped and dragged our boats on shore. We hiked up to an amazing waterfall and walked through the waterfall, it was breath taking! When we got back in our boats and on the river the rapids kept getting bigger and faster. Three hours later we got back to camp, but it was not over yet! For the real Die Hards there was the possibility to go back on the river again and experience the biggest rapids. Of course all the INTERNeX candidates were up for that. We went back on the river, it was insane! The river was super wild, awesome! 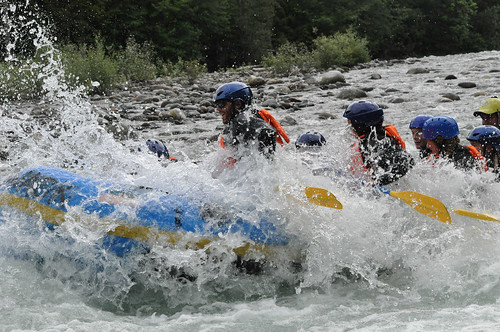 After we came back to the camp our lunch was already waiting for us. We had a last volleyball match and than we made our way back to Vancouver. We arrived in Vancouver around 4pm. Of course we have all the picture on Flickr.

I hope you guys had so much fun as we had 🙂

We hope we will see you on Wednesday at our weekly Pub Night @ the Doolin’s.

Find out why INTERNeX EXPLORER is a particularly appropriate name for this video. Last weekend we explored the untouched Canadian wilderness of Vargas Island! Watch how we managed to survive on this deserted piece of land surrounded by the ocean and wolf howls! How we built our shelters; how we cooked our food on a plain fire…