Yesterday we went to the Mill near Waterfront at Coal Habour Centre. The Mill is famous for their big outdoor patio, were we luckily also had a seat. 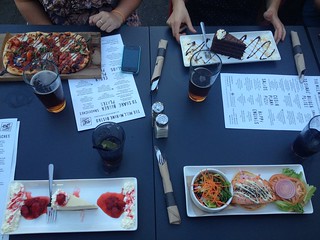 We met at 7pm at the Mill and we were seated on the outdoor patio with a beautiful view over North Vancouver. There was a little plaza in front of us with small water fountains. Not only serves the mill many different drinks, such as the nice sangrias, but also the food is phenomenal. I tried the NY cheesecake with strawberry topping, also pizza, salmon burger and fudge cake were ordered. If you didn’t had time to come to the pub night last night, don’t worry, the mill is open 7 days a week!

The Victoria Trip is coming up, so don’t forget to sign up before Friday 18th July 3pm! 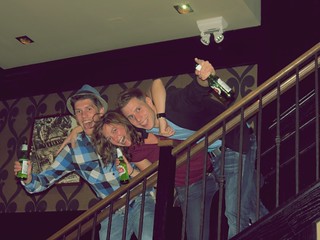 We will leave Vancouver at 7am and will take the sky train and bus to the ferry terminal from were we will go to Vancouver Island! Victoria is the capital of BC and very famous for they lovely flowers all over town. WE will stay in the HI-Hostel for a night and visit the Canoe brew pub for lunch and will go to the Spinnaker for dinner. For more details about the trip click here or here. Tag along for this great mini-holiday to Victoria!

On Sunday we have a distillery tour planned for you. This tour will take place on Granville Island and will take 40 minutes. In these 40 minutes you will learn more about the distillation process and afterwards we can taste some spirits. The tour cost $10 p.p and will start at 1pm. Please let us know before friday if you want to join, so we can make a reservation! See here or here for more information.

We hope to see you soon at one of our activities! Enjoy your day!!

We are nearly at the end of June, which means it is time to inform you about our events in July! July is going to be a fun summer month! Let’s see what we have planned:

Tuesday, 1st of July
Vancouver welcomes July with a several festivals around town to celebrate Canada day. On Canada day the Canadians celebrate the ‘birth’ of their country. In 1867 three colonies were united into to one country; Canada. We will meet at 6.30pm on West Pender and Broughton Street and will make our way to the Parade, afterwards we are going to try to find our self a spot to watch the fireworks at 10pm.

Sunday, 6th of July
You are going to love this activity we have planned for you! We, here at INTERNeX, are super excited for this special activity. We are going to North Van to play a round of paintball!! How excited are you eh!? The cost will be around $30 – 35 and we will leave Vancouver at Waterfront around 1pm. More information will be revealed soon!

Saturday, 12th of July
After the paintball activity it is time to relax an bit and therefore we will go to the Khatsahlano festival. Khatsahlano is a free festival which is held on 4th Ave from Burrad to Mcdonald street. You can enjoy the 50 music bands, over 100 vendor markets and there are more then enough food trucks to satisfy you tummy. More information will follow soon.

Sunday, 20th of July
The summer is arrived in Vancouver so it’s time to tackle the Grouse Grind. The Grouse Grind is a very popular hike up to Grouse Mountain on North Vancouver, but also very exhausting, however once you are on the top you have a beautiful view over Vancouver and you definitely deserved your dinner!

Saturday and Sunday, 26th and 27th of July
The last weekend of July is time for another overnight stay. This time we will take the ferry to Vancouver Island and enjoy an overnight at Victoria. Victoria is a beautiful city with many gardens, sights and activities. It is the perfect getaway spot after a hectic week at work!

We are already excited for July and we hope we will see you all at our events and of course our weekly pub nights (9th, 16th, 23rd, 30th of July)

In this episode of our INTERNeX Highlights, we will talk about all the things we did in September, everything we have planned for October (and some more) and, of course, the biggest event there is for this month – Halloween!

Taking a look at the video, you will hear about our summer ending party at the HI hostel at Jericho Beach, about the Giant’s hockey game we went to, about the nice afternoon at the flea market, our big monthly trip to Victoria on Vancouver Island, and the sunny start of October.

Other than that, we will keep you updated on our plans for October (and maybe something big in November?). From haunted houses over frightening nights and our highlight of the month: The big Halloween party at the Blarney Stone! Especially for that, we will give you a few tips where to get costumes and how to dress up for this ever present monthly highlight.

Take a look at find out about the details 🙂

What we did this week… as always it was amazing! The INTERNeX group went lost and found its way back again in Victoria. As you might remember we were stuck on an island last Sunday due to bad weather conditions. Once again, a moment that let us realize one of the many differences between Europe and Canada. Here, many things are still so much more dependent on the force of nature. But we made it!

Back in Van City we jumped into the planning of October: The month of Thanksgiving and Halloween. Are you already looking forward to a Thanksgiving dinner with your homestay family? Or are still looking for something to do? Remember that INTERNeX will offer you guys a Thanksgiving dinner, you just have to vote on the date. Besides the dinner plans, we also had our weekly smart saver again, and shared with you some details of our research concerning where to get cheap breakfast.

And for those of you who were frustrated by the fading sun and the seemingly ever present rain, we looked for some stuff to do indoors. One of us went to explore the depths of an enchanted store downtown, where everything becomes possible if you like books. And as a change to the office life, we had our PuB and CluB NiGHT on Friday. We went to The Cambie and to see how much fun we had there, you just need to take a look at Facebook on Monday. The pictures will tell you everything.

The only thing left to do for this week is to enjoy the walk through three of Vancouver’s neighborhoods this afternoon. If the weather continues to be as pleasant, it will be a very nice and relaxed way to discover parts of this beautiful city.

Hope you had a wonderful weekend and talk to you soon,

today’s post will hopefully put y’all in the mood for our big Victoria trip in the end of this month. Thinking that a few of you still may not be sure whether to sign up and come with us, I will give you a little overview of what you would be missing out on. And for all who already decided to join us: That’s where you will be going 🙂

Victoria – also called the “City of Gardens” or the “City of the Summer Asian Invasion” –  is the capital of British Columbia and located on the southern tip of Vancouver Island, right off Canada’s Pacific coast. Its name itself is a tribute to the British Queen Victoria and it is one of the oldest cities in the Pacific North West. Therefore, the town is still defined by many historic buildings, as for example the British Columbia Parliament Building. These are located at the Inner Harbor and a ‘Must See’ for every tourist.

And of course, like more or less every other bigger American city, one of Victoria’s neighborhoods is Chinatown. However, the interesting thing about this part of town is: It is the second oldest Chinatown in North America after the one in San Francisco!

Besides these two details, we are planning to visit the Royal British Columbia Museum also located downtown. The museum includes three permanent galleries: modern history, natural history, and local First Nations’ history. It is supposed to be one of the most interesting educational places one can visit in B.C. So let’s find out.

Another highlight of the trip will be our tour to the Craigdarroch Castle. A Victorian-era Scottish Baronial mansion built in the late 1800s. Originally, it was constructed for a wealthy coal baron and the mansion has over 30 rooms, which are known for their luxurious design and furniture.

Last but not least, I want to mention Beacon Hill Park. The park itself is for recreational purposes and offers some beautiful shoreline trails, as well as the “Mile 0” of the famous Trans-Canada Highway. Also, as a little bird told us, if you know where it is THE of best place in town to get ice cream. And guess what? We know where! So imagine yourself strolling around, enjoying your ice cream, watching out at the Ocean… Still not wanna come with us??? Come on, give yourself a start. You can still register (and pay) at tomorrow’s PuB NiGHT or until the 20th at the INTERNeX office. We are waiting for you!