Unfortunately, it is time to say goodbye to another great weekend in Vancouver. This means I only have one weekend left in this beautiful city. But hey, let’s not get into that right now. Instead, let me tell you about the fun I’ve had the past few days.

On Saturday, it was time for our INTERNeX event: Outdoor Game Day. Six fun activities were on the schedule. But first things first: Team division. Who forms ‘team pink’ and who is part of ‘team blue’? After we determined that, we spilled the secret that there’d be a prize for the winning team. We had to get you guys motivated. Time to play the first game: ‘Card Relay Race’. Let’s find out how competitive you guys are. In this game, both teams had to collect all cards of a specific symbol. But, it wasn’t that simple. The cards lay, face down, on the other side of the field. Team members had to run back and forth, flipping a card at a time, until their stack was complete. It took quite some time before there was a winner, but in the end, it was 1-0 for team blue.

A round of memory, Kubb and water bottle bowling later, it was 3-1 for team blue. Next up: Pictionary. This was a challenging game in which everyone could show off their drawing skills. Well, or lack of drawing skills. This game surely created a lot of laughs. The last game involved water, sponges and buckets. The goal: bringing as much water to the other side as possible. Though it might seem impossible, both teams had the exact same amount of water in their buckets. So, both teams got a point. The end score: 5-2 for team blue. Congrats guys! I hope you liked your prize!

After multiple hours of being active, it was snack time (schnacks!). A couple of us went to the Warehouse in Gastown for lunch. When we finished our meals, I went home to freshen up. Not long after that, I went to Surrey to meet up with friends. We spent the evening watching my favorite movie: Safe Haven (If you haven’t watched it yet, get on it!) and Pitch Perfect 2.

On Sunday, I spent most of my day relaxing. In the evening, however, I went to the Queen Elizabeth Theatre. Two YouTubers I watch, Dan Howell and Phil Lester, are on tour right now and on this day, they were in Vancouver. Their show is called Interactive Introverts and its aim is “giving the people what they want”, as Dan likes to say. I laughed a lot and couldn’t have spent my Sunday night any better.

I hope you all had a great weekend as well. See you tomorrow for our Outdoor Movie event in Stanley Park!

As always, Wednesday nights are PuB NiGHTs with INTERNeX. And as always, we had a good time with our candidates. But, what exactly were we up to? Well, we went to the Beaver Bar at Granville once more.

If you have never been to the Beaver Bar, here are some basic facts: 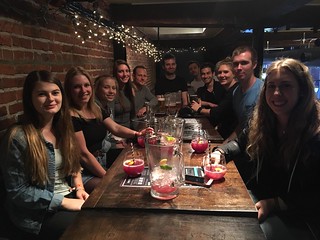 So yes, we played Bingo once more! And the Beaver Bar does not just have the basic and normal Bingo with numbers. No. They have music Bingo! From Darude’s Sandstorm to Jason Derulo’s Whatcha Say, we heard it all. It’s quite a nice mix of old and new songs. But sometimes, 99% of the candidates didn’t know a song at all. In those moments, we looked at Matt with big eyes, the candidate who never left Vancouver. He’s a big music fan, so he knows all of the songs. And so, we played several round of this music Bingo. And people, you won’t believe this, BUT: the INTERNeX crew won 3 times! Yes, you read that right! After all the PuB NiGHTs with not a single Bingo winner, we can proudly name 3 candidates as winners. So, congratulations Liam, Samuel and Antonia! I hope you enjoyed your shot and pitchers of beer.

Around 11:30pm, most candidates decided it’s best to go home. They are responsible young adults that need a good rest in order to work well the next day. How I admire that, especially since I was in bed at 2am.

It was great to see you all there! I’m looking forward to see some of you again this Friday at the baseball game!

Life is a waste of time, and time is a waste of life. So let’s get wasted all of the time, and have the time of our life. Yes, I think I can speak for everyone that joined yesterday when I say that we had another amazing PuB NiGHT! The Lamplighter was a great place to have delicious beers, fancy cocktails and even tasty food like curry wurst or yam fries.

The longer we were sitting at our tables, the more of you showed up. Everyone was talking and having a dri– BOURBON BINGO! Oh yea, we played Bingo at the pub, too. Jessica and Moa were lucky enough to win a Bingo round. They were rewarded with shots and glasses of beer. CHEERS!

When the Bingo was over and the last glasses of beer were emptied, we continued our PuB NiGHT adventure. And as usually, we ended up at the Met, our favourite karaoke bar. This was the moment where everyone showed off their stunning singing voices. But all good things must come to an end, so when the clock hit 2am, we grabbed our jackets and went for some fries and nuggets. With a full belly, we went home to bed and dreamed of all the wonderful things we did at this PuB NiGHT.

Here is some wisdom for the next PuB NiGHT to come: If the ocean was beer and I was a duck, I would swim to the bottom and drink myself up. But the ocean’s not beer and I’m not a duck, so let’s drink these pints and get messed up.

Thank you for this great PuB NiGHT and I see you this weekend at the 24 hours of winter on Grouse Mountain or next Wednesday at 131 Water!

Friday is here!!!Oh yeah! The weekend has finally arrived!

Yesterday we began our pre-weekend with a great afternoon doing indoor paintball in Richmond! It´s one of the best places for doing this activity all over the world! So lucky for ours winners!

As you know in our Summer Party a lot of prizes were given away! And one of them was the paintball tickets!

We all met at Waterfront Station after work and take the skytrain together to go there!

Once you arrived to Richmond it is really curious to see all the posters on the streets in Chinese language! Yes, in that area the Chinese population is more than the half of the people than the total that live there! So is not Chinatown, is at least Chinacountry! Oh what a bad joke! But it´s true it´s amazing how all the city is ready for their Chinese neighbors.

Everybody was so excited before entered in the place! Last time INTERNeX went to the paintball everybody looked afraid, but this time everybody showed very brave and with a lot of energy to do a colorful war!

A guy explained the important rules of the game like to have always the mascara on, don´t shot without looking … and after everybody knew the rules the war started!

The game consisted in two different teams that battled against each other! Are you on my team or are you my enemy, my friend?

It was a funny Thursday and all our winners had fun!

Check our flickr page out to see more pictures!

We decided to spice things up a bit for this week’s PuB NiGHT @ Sharks Club, so we organized an INTERNeX Trivia Quiz and it was a huge success! We had great prizes to give away and everyone was actually pretty knowledgeable about Vancouver and Canadian Trivia.

3rd place came down to a 3-way tie. Whoever was brave enough to stand up and sing the Canadian National Anthem got to claim the prize. Daniela was the courageous contestant and sang the first few words to the Anthem and won 2 tickets to the Maritime Museum!

2nd Place went to Esther, just one point behind 1st place and she was the lucky winner of 2 tickets to the Museum of Anthropology

The 1st place ultimate winner of the INTERNeX Trivia Night was Niels!  He was the only one to know both of the Vancouver Soccer and Football teams.  Niels took home a 2-hour scooter rental around Vancouver!!

Did you guys like having the quiz and the chance to win prizes? Let us know if you would like us to do something like this again soon 🙂

If you want to the rest of the pictures taken last night, check them out on our Flickr Page

Yesterday we had our INTERNeX Quiz NiGHT at the Moose’s Down Under sponsored by Taxback.com! The night started at 8 pm, when slowly the candidates were coming into the bar. When everyone was there, we started to divide everyone into teams. All the teams had to come up with their own team name. My team name was for example: Denemex (Denmark, Netherlands and Mexico). When all the teams were ready we started the quiz! The first round was the picture round – we had a paper with famous people and we had to write down their names on the answer sheet. The second round was ‘general knowledge’. The third round was a movie round with only questions about well-known movies. Finally, the last round was all about music! The questions weren’t easy, but we were battling for an amazing price – 150 dollar bar tap!!

While the jury was counting the points, we were discussing all the questions and we having a nice chat with each other. After a few minutes they were ready to announce the winner! The winners of the $150 dollar bar tap are….. Christian, Bart, Roy and Elvera!! Congratulations to you all, you deserved to win with 43 points!

It was a really nice PuB NiGHT last night and I hope everyone enjoyed it as much as I did!! We will see everyone next Wednesday again :D. If you would like to see more pictures that were taken yesterday, go to our Flickr-account.

At yesterday’s INTERNeX PuB NiGHT two of our candidates won two tickets for the Canucks game for tonight! After the intense and exciting INTERNeX lottery we finally got to know the names of the happy winners. Florian from Austria and Jun Kim from South Korea are the lucky ones who will be going to the Canucks v.s Sharks game in the Rogers Arena at 7 pm tonight.
The two tickets together are worth more than 200 dollars. So you guys enjoy the view from one of the best seats in the stadium!!!

Besides the two happy winners, we had a nice time in “the Cambie” For me it was the first time there and I liked the atmosphere a lot. The fact that a pitcher was just 9 dollars made it even a better experience. Haha.
I hope to see everybody next Wednesday again!

Some of you I will see on Saturday morning then – because it is SNOWTUBING TIME on Mount Seymour. In case you guys forgot about it we will meet at 9 am in the Waterfront Station in front of the StarBucks. Be on time!!!! Because we will leave to North Vancouver with the ferry at 9.15 am.  Thereafter we will take the shuttle bus to the mountain at 9.50 am. In case you guys live in North Van, we can catch up at the bus station in front of the coffee store “Beans around the world on 123 Carrie Cates Court in front of Lonsdale Quay. In case you guys have any questions about the event, just write an email to PR@internexcanada.com

So see you soon then and have a great day!!!