As promised: part 2 of the Rockies trip review..

Well, everyone was there except for Sambo, Papa Wolf’s right hand on the tour. Sadly we only saw some elk on the tour, but on the other days we saw two black bears and one grizzly bear. APPLAUSE!

We got breakfast from Tim Hortons and we went to see more lakes and went to the top of Sulphur Mountains in a gondola. On our way to the top the view over the mountains was breathtaking, even though it was cloudy we could still see a lot. It was freezing on the top and there was still quite a lot of snow. The weather on the top changes rapidly which was very interesting to see. Another awesome thing on the top of the mountain was the ‘West Trek photo shoot’ – we had to jump or make a Matrix like move while Sambo took a picture. I am excited to see the end result. 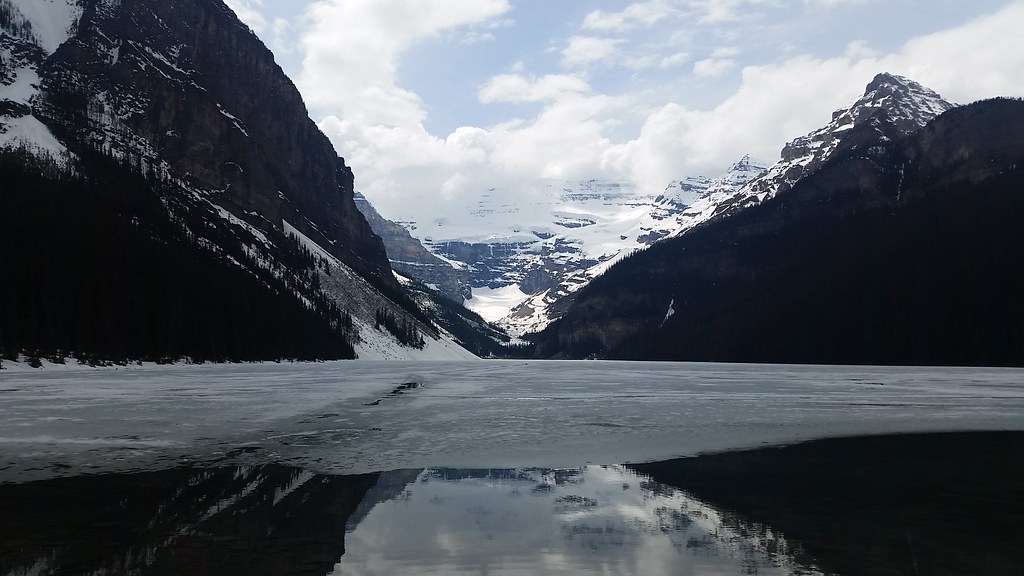 Lake Louise and Emerald Lake are a huge highlight of the tour and which is where we went afterwards. Lake Louise is still partly frozen, but the scenery is amazing nonetheless. Highlight of the tour for many people was Emerald Lake. Most of us rented canoes here and got onto the lake and paddled around – absolutely fascinating. This lake has turquoise coloured water, which makes the lake very special. Plenty of selfies were made and a big wolf howl was done by all the baby wolves on and around the lake. 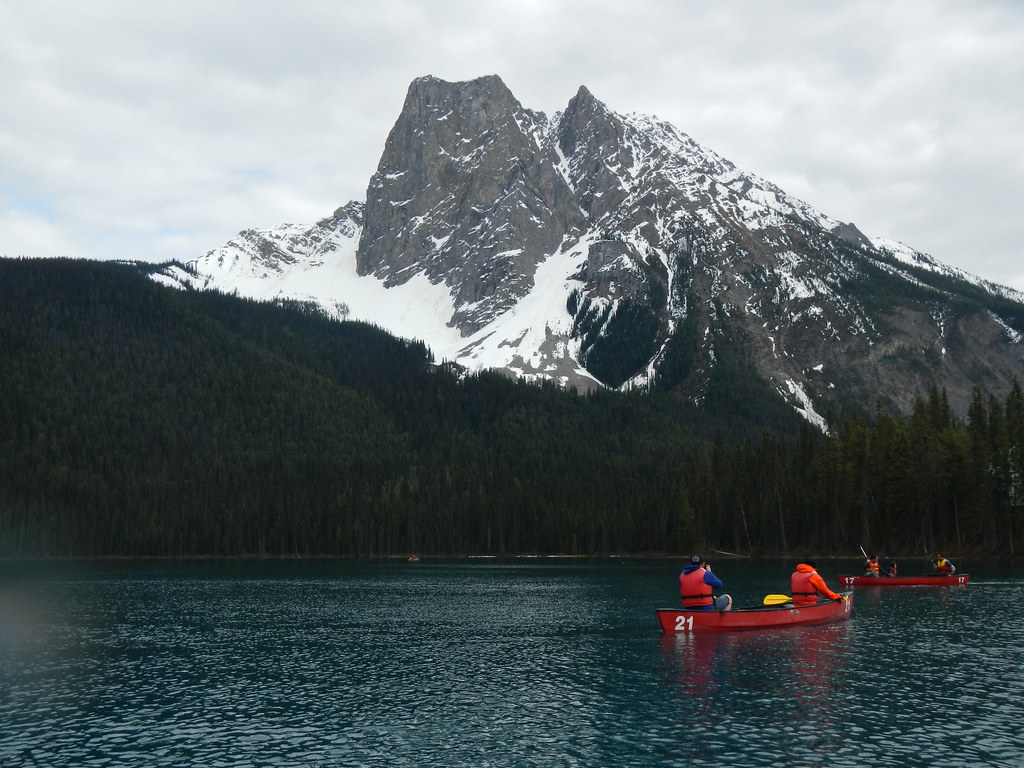 Another huge highlight of the tour was the cabins. Wooden cabins built on the mountain between the trees with a cosy fireplace area. We had a lovely barbecue here, tasted some wine and sang songs around the campfire. Papa Wolf finally shared his bear stories with us and we got to see the Milky Way as it was so dark at the view point. We also had a birthday girl amongst us, so we sang for her, we drank more beers, had more fun and some people only went to bed at 4 a.m. Good job guys! 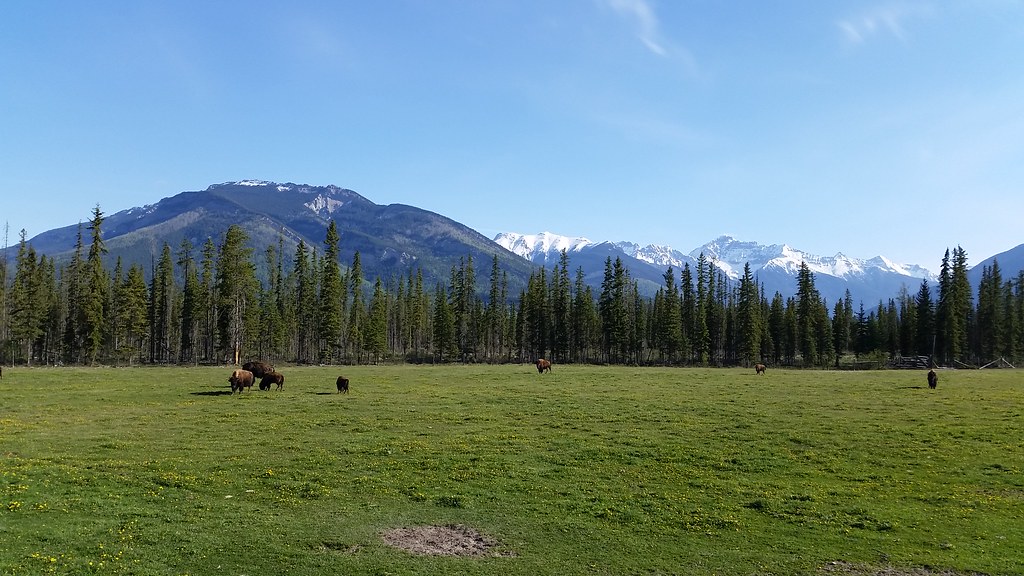 The very last day of our trip we mostly sat in the bus because we had to head back to Vancouver. But before we headed back to the city we visited a buffalo sanctuary where Leo, the host, told us about his cattle and showed us how native Canadian people used to make fire back in the days.

Then we got to see some real wolves and howled with them, quite an experience I’d say.

We were lucky to have a very warm and sunny day, because we went to Kelowna where some of use dived into the lake; a nice and refreshing end of our trip. We headed back to Vancouver and arrived there around 7.30 p.m. We were sad to leave the Rockies, but we all were very satisfied and happy that we got to go on this trip. Also, almost all of us had new nicknames!

INTERNeX’ers, thank you so much for the great great Rockies trip.

Our four-day trip to the Rocky Mountains with West Trek… this weekend was absolutely amazing! Thanks to our tour guide Papa Wolf we know a lot more about these beautiful mountains and its surroundings, we know more about bears, fun facts about villages and besides, we have many new friends.

On the first day we started our journey to the Rocky Mountains. We first went to Hope, which is located about two hours from Vancity. Hope is a cute little village, where the famous movie Rambo was filmed. After a short stop for some coffee and breakfast we continued our journey to Kamloops where the we, the baby wolves, could buy lunch and snacks for later that day.

Papa Wolf had prepared some games which we played on the bus. The bus was divided into two teams: Team Beavers and Team Snakes. Papa Wolf would name an object after which both teams had to find this object in our bags, pass it through all the way to the back of the bus, pass it through to the front, hand it over to Papa Wolf and make the sound of their animal team name. The team making the sound first won. Haha, imagine half a bus making a beaver sound. Quite hilarious. Besides playing games we sang – and we sang loud. Avicii – Wake me up and Grease – Summer Nights. Oh, a bus full of nightingales. 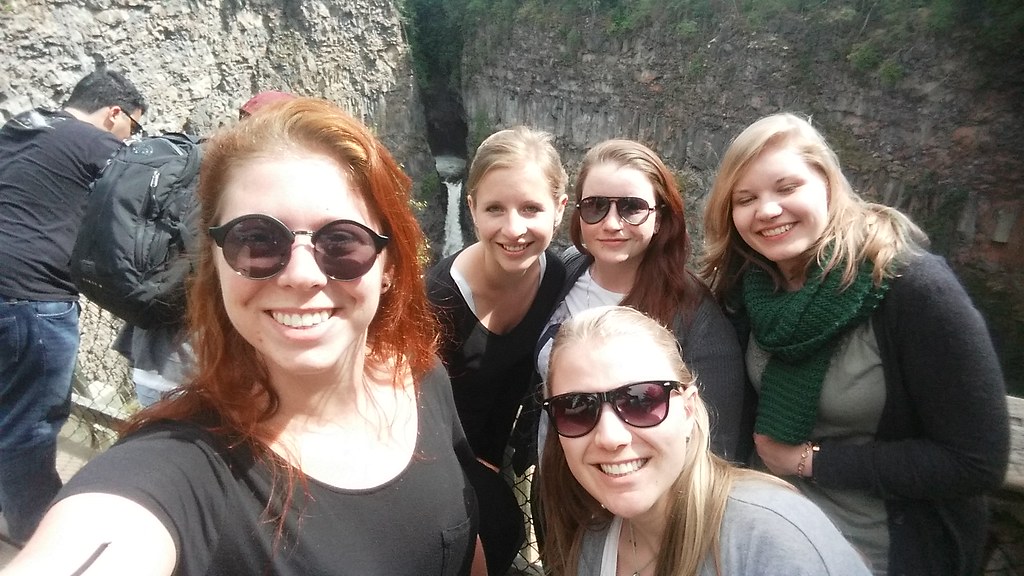 After our stop in Kamloops the bus headed to the Spahat falls, a nice little waterfall where Papa  Wolf offered to take some immature pictures. That turned out hilarious I guess, can’t wait to see all your photos.

After this stop we got back on the bus and drove to our first hotel in Valemount. When we were arriving there the sun was out and people were feeling good. So we sat down, drank some beers, had a pasta dinner and then we played street hockey! A campfire was built and people got to know each other better. A good way to end the first day. 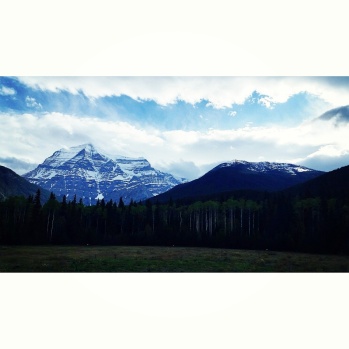 Rise and shine early because we were about to officially enter the Rocky Mountains National Park. The first stop was Mount Robson, the highest mountain in the Canadian Rocky Mountains. The peak of this mountain is higher than the altitude at which a sky diver jumps out of their airplane, namely 3,954 meters. Also, this lovely mountain creates its own weather because of its elevation. We were told that often the mountain is surrounded by clouds, but our group was lucky to see most of “her face”, as Papa Wolf would call it.

After Mount Robson we headed to Jasper to get some lunch supplies and then drove further to the Athabasca Falls followed by the Columbia Ice fields. At the Columbia Ice Fields an optional activity was offered, which was the SnoCoach. The SnoCoach is a huge bus, specifically designed to drive on snow, which has enormous tires taking passengers all the way up to the glacier. On the glacier we had an amazing view on the surrounding mountains and the huge ice fields.

On our way back from the Glacier Papa Wolf introduced another game. Everyone on the SnoCoach had to stand up, hold the shoulders of the person in front of them and while the bus was driving up a steep slope, both teams on the bus had to try to remain standing as long as they possibly could. The team that collapsed first lost. I think to remember there was a tie! 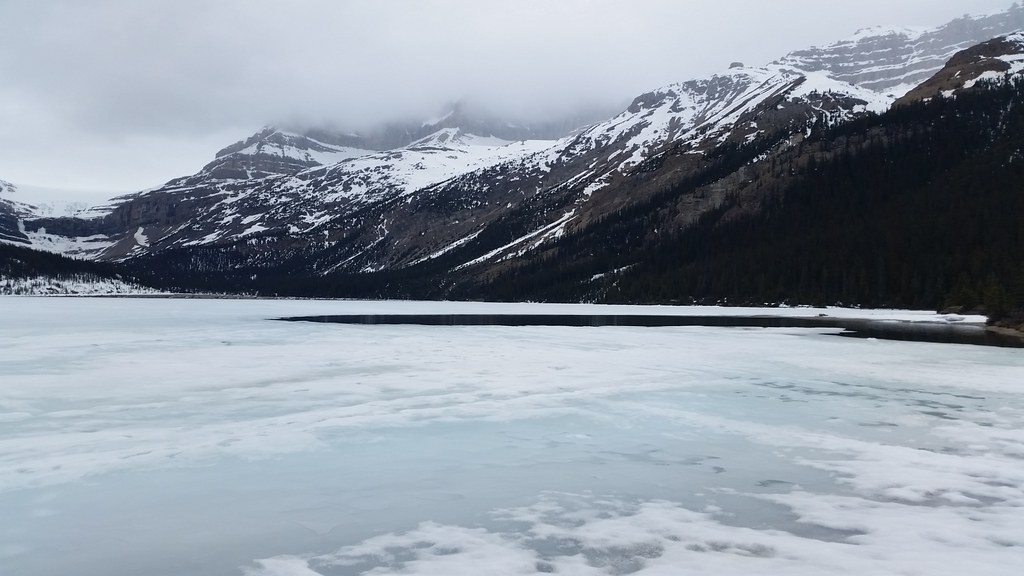 After some people had done their jumping jacks because they said a certain word, we continued to two lakes. One of those lakes was Bow Lake; absolutely beautiful. The lake was still partly frozen and that created a very winter like landscape. JAPANESE GIRL!

After having visited these amazing hotspots we checked into our hotel and we all got sexy for our night out in Banff. Papa Wolf, all dressed up looking swish in his too tight yellow pants and suspenders, first took us to a pub located right next to the hotel. Together with baby wolves from the other bus we played an absolutely awesome drinking game after which we went to Banff’s best night club! As far as I could notice everyone was having a great time and I wondered who would make it to the next morning’s wild life loop at 8 a.m.

Want to know what happened the following two days? Tomorrow part 2 of the Rockies review will be released!