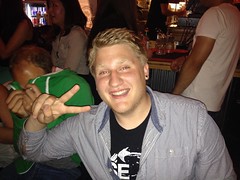 Today it is time for me to say ‘Goodbye’ to everyone. I stayed in Vancouver now for two months, at INTERNeX for one month. The time in Vancouver is gone so fast; it feels like I am just arrived. However, I had an amazing time in Vancouver, thank you all for this! I will go back home with a lot of new experiences and I am sure that I will never forget this great time in Canada, it really impressed me.

Of course I also want to say a big ‘Thank you’ to INTERNeX, thank you Tim, Simon, Lisa, Mina and of course the PR-Crew; Alex, Selina and Danie! Thanks for the great help and the nice days together in the office. I’m sure that this experiences which I could do because of you all will be useful in my further life. 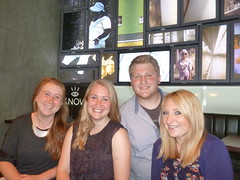 The most impressed trip in Vancouver was definitely my trip to the Rocky Mountains for almost four days. I have never seen such an amazing nature like this before. I really hope to be able to go there again, if you did not go there before, you really shouldn’t miss it! But there were also some more trips which were really cool; of course the Grouse Mountain with the Grouse Grind, the hike on Bowen Island, to see whales in nature or just every single PuB NiGHT which was always fun. Actually every single day was an amazing day in Vancouver!

I hope you all will enjoy the rest of your time in Vancouver, especially the summer in this amazing city. I really hope to get the chance to come back some time.  But for now, it is time to say ‘Goodbye Canada’!

Oh yes, it’s time for another INTERNeX PuB NiGHT! This time, we’re heading over the Cambie Bar in Gastown!

The Cambie bar is part of the Cambie Hostel, which all began in 1887, when a new saloon on the bustling Cordova Street quickly established itself as a happening social centre for locals and travelers alike. When the Prohibition of the 1920’s was in full swing, bootleggers floated their forbidden wares through False Creek and delivered them straight to the Cambie storeroom through an extensive network of underground tunnels. The General Store & Bakery adjacent to the pub saw its share of excitement too, as a boxing ring where five cents would buy you hours of ringside entertainment. Although the hotel got a major facelift in 1997 to camouflage a century of drunken debauchery, the spirit of excitement and fun is still very much alive.
So join INTERNeX at the Cambie on Wednesday, July 7 at 300 Cambie Street in Gastown! 8 p.m. is our usual meeting time, so come around then! This time we’ll have a little trivia quiz so we can dish out some prizes. Make sure to be on time or miss out on some good stuff!
See you next week!
Laura

The world we live in is a large and beautiful place. There are approximately 195 countries on earth, all offering different landscapes, cultures and languages. So, have you been exploring yet?  Maybe you’ve only been thinking about traveling, or maybe you’re currently planning your next move. But, if you’re searching for a destination where the landscape is green and the mountains soar as high as your dreams – you’re searching for New Zealand.

New Zealand’s spectacularly beautiful landscape includes vast mountain chains, steaming volcanoes, sweeping coastlines, deeply indented fiords and lush rainforests. Comparable in size and shape to Great Britain, Colorado or Japan, New Zealand has a population of only 4 million – making it one of the world’s least crowded countries. It is a haven for those seeking peace, rejuvenation and relaxation as well as a playground for thrill seekers and adventurers. A temperate climate with relatively small seasonal variation makes it an ideal year-round holiday destination.

Start planning now and you could be on your way to New Zealand in time for the 2011 Rugby World Cup – the premier international rugby union competition. Canada, Australia, England, South Africa, USA, France, Scotland, Ireland, Italy, Samoa, Fiji, and Tonga are just a few of the competing countries! This is the third largest sporting event in the world, behind the Olympics and the Soccer World Cup.

Choose from many INTERNeX programs such as work and travel, gain work experience in the hospitality and tourism industry, undergo a professional internships or even try out our Farmstay program! INTERNeX has the program for you!

INTERNeX has agents in Canada, England, USA, France, Argentina and more! INTERNeX itself also has offices around the world, including New Zealand! If you’re seeking work or internship opportunities, we can help you! For more information on our programs and services in new zealand, visit www.internexnewzealand.com. To visit our Canadian website, click here.

If you live in or near Toronto this is for you! While working and traveling within Canada, it can be hard to find an enjoyable evening that isn’t too expensive. One hot spot for a great night out is The Sulta’s Tent at 49 Front Street East in downtown. This restaurant can provide you with a full belly –  and belly dancing!

With many options for a four course meal, you’re guaranteed a relaxing dinner in an amazing atmosphere, but that’s not all. During your meal, the Sultan’s Tent provides belly dancing shows. I have a friend that had dinner there and while she admitted the dinner was amazing, she really enjoyed getting some belly dancing lessons by the performers! For a printable version of their menu, click here.

For those of you attending the Toronto International Jazz Festival, you could also check out the Sultan’s tent during a performance by Suzana Da Camara. For more information on this event, visit the event section of the Sultan’s Tent website.

For decades, the original Sultan’s Tent at Bay and Yorkville entertained groups of diners in Toronto seeking an evening of entertainment, good food, romance and fun in a transporting traditional Moroccan experience.

The original Sultan’s Tent was closed in 2002 when its location was slated for demolition to make way for a high-rise. Purchased from the original “Sultan”, Nagi (now retired),  The Sultan’s Tent & Café Moroc has been relocated at a splendid new oasis at 49 Front Street East in downtown Toronto.

Glowing on the wall near the entrance to The Sultan’s Tent is a magnificent hand woven rug, a gift of the present King of Morocco’s father, Hassan II, who inspired a renaissance in the country’s arts and crafts. We thank the recipient’s son for letting it grace our wall. As far back as history is recorded, Northwest Africa and the Barbery Coast of pirate lore has been at the geographical and cultural crossroads of Europe, Africa and the Middle East. The result is an intoxicating blend of cultures.

The indigenous Berbers, plus Arabian, Spanish, English and French influences have created a tantalizing mix of craft, culture and cuisine in one of the world’s most artistic nations, Morocco. In the 19th century, many European artists were drawn to Morocco’s luxurious interiors, exotic costume and lavish hospitality. They recorded them in paintings that are marvellous invitations to other lands and other times. These and many other images, modern and historical, blend in our impressions of a mythical, magical Morocco.

Moroccan traditions of hospitality were born of the Berbers’ nomadic life. A Sultan (Prince or ruler) would have a beautifully decorated tent with intimate alcoves, and these were echoed when they built even more lavish royal palaces. The Sultan’s Tent evokes the setting of a traditional “diffa” (lavish) banquet) at which all are welcome and where the dining philosophy was one of abundance.A sense of ritual hospitality, combined with regally prepared traditional dishes, earned the host his reputation.

We hope some of you get the chance to experience a relaxing evening at the Sultan’s Tent, while enjoying superb food and delightful entertainment among good friends. For more information on events and activities near you, visit the INTERNeX Events and Activities page.

Since last weekend’s barbecue went so well, INTERNeX has decided to use food once more to bring people together! Join other INTERNeX participants on June 6 for a Potluck dinner! Come to the INTERNeX house around 6:30 p.m., and join in on the fun! This will be a relaxing evening featuring a nice dinner party.

If you don’t know what a potluck is, then you need to participate! A potluck is a gathering of people where each person contributes a dish of food to be shared among the group. This is a great way to show your cultural background, so bring a dish that best represents your country! It will be a fun way to teach others about where you’re from and learn about other people too! After all, food is a way that cultural groups express their way of living!

Please e-mail me at pr@internexcanada.com to tell me what you’re bringing. This is so we don’t have duplicates of dishes. If you don’t know where the staff house is, also e-mail me for directions!  You can bring an appetizer, main course or dessert! It’s completely up to you! We really hope you can make it!