INTERNeX Explorer Ep1 – 2017 Behind the scenes

This week we posted our first episode of the INTERNeX Explorer. We are planning to publish an episode every month. Our new show will include some cool spots in and around Vancouver, upcoming trips and events as well as a review of the previous month. We hope to inform and entertain you with our little show we call the INTERNeX Explorer.

It was lots of fun making the first episode. We started with writing our own scripts. The hardest part was coming up with some interesting fun facts about ourselves. However, with some help from each other, we all figured out what to write. 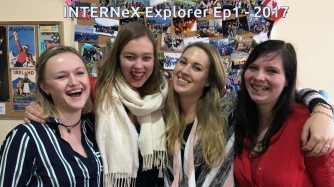 Afterwards the filming finally started. As it was the first time we were being filmed, we were all a bit nervous, which made us forget our text sometimes. Luckily, we had our scripts near by and quite some time available to shoot the video. Janel had the chance to practice her news reading skills and also had to point to pictures which were not here and added in post. As she never did that before, it was a bit awkward.

The most difficult part was the part of the future events. First Danielle kept touching the green screen, as she wanted to put her jacket on. We therefore decided it would be easier if she was already wearing the jacket. But of course that meant she was getting hot wearing the jacket the entire time while filming. It was sometimes hard to stop laughing when we were shooting the part of future events. Simon had to sit in a very uncomfortable position on his knees outside the view of the camera to give Danielle the ski sticks.

After the shooting was done Simon and Tess had to do the editing. The postproduction of the video seemed to be the hardest part of our whole process. A lot of footage had to be viewed and in the end some music had to be found. The final cut went to some reviews and the entire team had to be alright with it. Simon said we can be proud of our first video and also that we will improve with every episode. We hope you agree with him and look forward to produce the next episode with him.

If you haven’t already, check out our first episode of the INTERNeX Explorer:

I hope you will enjoy the video and I am looking forward to hearing your comments!