Another Wednesday has come and gone and what a fun night it has been again to see everyone but also so many new faces at Pub Night! 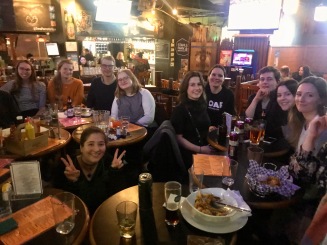 This week we went to the Two Parrots. They had reserved a whole gallery by the windows for us and created a new sort of space for us – a circular table setting in which many of us started out with some great food and drinks. Having become a dark beer enthusiast lately, I tried a Stanley Park Brewery special which had the greatest taste – a combination of the typical dark beer flavour, stripped off the extreme bitterness some dark beers might have, in addition with a nice taste of sweetness. Lovely, especially in combination with the very Canadian dish of Poutine! 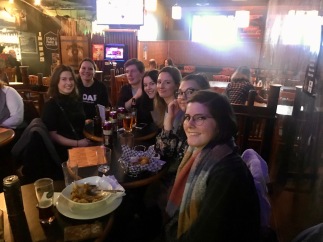 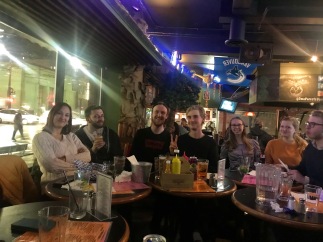 As the evening went by, it was great to see so many of our Newbies joining, getting introduced to the group and mingling with everyone – I actually heard that some of them ended up on a bull that night and were also properly introduced to the Yale tradition by some of our “senior” participants. All in all a good night with lots of drinks, food and lovely chats! ☺Please be reminded of our very important Pub Night
next week, which will lead us to the Cambie, which is not only Vancouver’s oldest bar, but also a historic setting for legendary Beer Pong tournaments. Next week, especially, the motto will be: All in, we can only win!!

Like Loading...
Isn’t it weird how the night from Wednesday to Thursday always feels so much shorter than any other weeknight?! 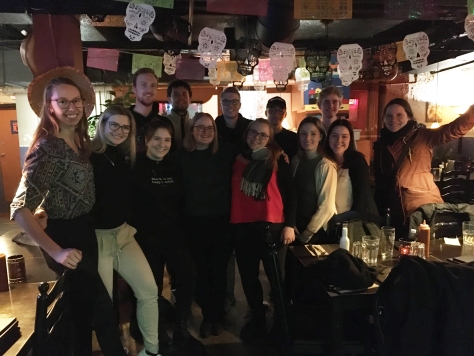 Anyways even though I am bit tired, I had a pretty good night last night again! 🙂We went to the La Casita, which doesn’t just sound Mexican, but actually took us on a little trip down to Mexico right away. The music, the decorations, the drinks – everything was just perfectly getting you in the right vibe. So after some fantastic food, we made our way through the margarita menu. So that even our Danish margarita queen found something new to experience ;P. But there is still one massive question that has been bothering me ever since and unfortunately I couldn’t find an answer last night … so when do I get sugar and when do I get salt on the edge of my margarita glass?? So if anyone could please get me out of this sinister hole of cluelessness, please leave me a message. 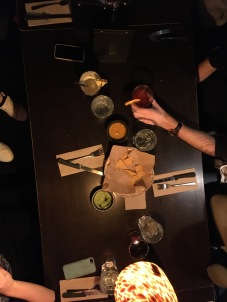 Anyways Pub-Night wouldn’t be Pub-Night, if we wouldn’t have moved on to a different location to continue the celebrations of togetherness. Out of the two big favourites, we chose to go to the Cambie this time. Sorry Yale – Saloon, but you will probably see us soon enough anyways.  A very exhausting game of Pac-Man, brought me closer to nervous break down than I ever wanted to be. Maybe it’s not really who we play against (literally any game), maybe it’s the Cambie itself, that brings out the most competitive side in everyone :D. (Careful, this was an inside joke and might test your loyalty to this blog).However, afterwards we moved on to the Dance Floor and since we’ve got it all to ourselves, “dancing like nobody watches you”, wasn’t a phrase anymore :D. And I won’t lie, we learned some incredible and unique dance moves to show off at the next club visit. Usually you get three types of people on the dane floor. Type 1 would be the “right-tip-left-tip” type, so more the classical “I like to dance, but I am not going wild tonight” kind of 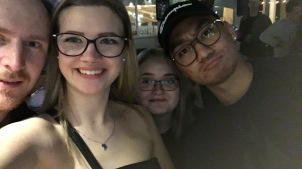 dancer. Type two, which is the “move-your-hips” type, clearly knowing what they are doing and actually looking good doing it, simply born with rhythm in their blood. And then you get the “getting-jealous-looks-because-their-dancing-looks-like-so-much-fun-but-you-get-funny-looks-for-doing-it” type of dancers. (Wow what a handy and short name, well done Nadja.. getting right to the point here!).  So I think all of us just transformed into type number three and honestly I don’t think I can ever go back from there! 😀
Thank you guys for honouring me with your presence :D. See you next week!
Cheers,
—Nadja xx
INTERNeX International Exchange
International Village,
Suite 2077, 2079 – 88 West Pender Street
Vancouver, Canada -V6B 6N9-
Web: http://www.internexcanada.com
Email: pr@internexcanada.com

The first full week of January is about to start, and this means for most of you – let’s get back to work!
Let’s do it guys!

This weekend the INTERNeX crew went to the Stanley Park Brewery. Located right in Stanley Park (as the name might have spoilered already), this very romantic, beautiful place provided us a beautiful evening. 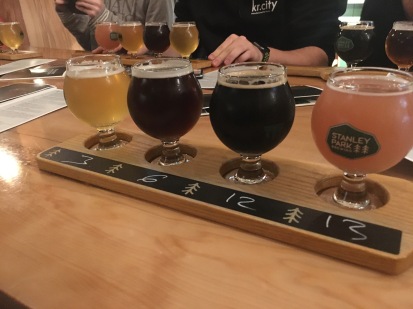 We got to eat a fantastic dinner and of course got try out some different sort of beers brewed right there. One fly included 4 different kinds of beers, which you got to choose from a menu of 16 different beers. A variety I was clearly overwhelmed with. Whereas others actually made  logical decision based on the very fancy descriptions for every beer, I sticked to trusting the waiter with all my heart or just going for wild, slightly random picks. Cleary I am not a professional beer taster yet, even tho this little fancy glasses made you feel like one.  However, have you ever tried Coffee-beer? I just loved it, so in case you don’t know what to choose, this is definitely something I can recommend. And trust me, I actually sounds wilder than it tastes.

After the dinner we went on to The Cambie, where we went back to the beer-classics and had some nice chats, while listening to a bit strange mix of music.
Thank you guys for a lovely Saturday!

Next weekend we will be playing Lasertag, so whoever isn’t afraid to face my very professional ninja-skills is more than welcome to sign up for it on Facebook. And yes, once again  you will have to agree to this very huge and intense commitment of clicking the going button on Facebook (I know I am asking a lot here), if you want to be part of this battle of a century.

If you have any question you can always message us or ask me at this weeks Pub-Night at the La Casita!

Have a wonderful week,

The feeding has come to an end, or with other word, the holidays are eventually over.
I hope everyone had a fabulous start into 2020. If you had any New Years Resolutions, I am very sorry it didn’t work out. If you still have them, good luck ;-).

Anyways, the first weekend of the year is coming up and I’d say let’s make the best out of it to set the year right from the very beginning!
This Saturday our INTERNeX family (we celebrated Christmas together, I’d say we are a family now :D), is going to Stanley Park! And not just anywhere but to the very well-known Brewery. And just as you do in a Brewery, we are gonna have a little Beer tasting there. And even if you are not 19 yet, you are more than welcome to join and watch us drinking beer. No I am joking, of course there are going to be non-tipsy making alternatives for you :).

If you decide on joining, you want to be quick on clicking on going on Facebook, as we only have two seats left.
Besides that, here are some more inspirations for the upcoming weekend:
If you are planning on going for a wild night on Saturday, you might want to consider the MIA nightclub. They will be hosting the ‘Rave for Cancer’, which means fundraising for the Young Adult Cancer Society. I think this is a very cool and important thing and should remind us on how lucky we are ourselves! The only problems our peers should be facing is stuff like the previous breakup, the unwanted twinning with that girl in the club (crashing, I know) or the failed uni-exam. Okay well, my examples might be not the best here, but what I am trying to say it – be grateful guys and go and support the ones who aren’t as lucky!

If you just want to do something less active and more laid back on Sunday, the IndieFlicks Film Festival might be just what you’ve been looking for. There will be deep, meaningful .. (list continuous..) short film from all around the world.
So get out there and have a beautiful weekend!

Another workweek has passed and the weekend is close at hand. So what is there to do on the upcoming weekend?

One of the greatest events this fall starts on Thursday, September 26. It’s the International Vancouver Film Festival (VIFF). The VIFF presents the world’s best cinema fused with related talks and events. Over 320 films are on display in a variety of movie theatres throughout downtown and approximately 400 industry professionals from around the globe are hosted. We will watch a Canadian Premiere on Sunday, September 29. “Burning Cane” depicts the stories of two Southern African-American men and their struggles in daily life as a pastor and unemployed father. The movie, which was written, photographed, and directed by someone still in high school (Philip Youmans), is surely worth a visit. We will meet on 2:30 pm on Sunday in the Cineplex Odeon International Village Cinemas, in the shopping mall where also our office is located in.

Apart from the world of movies, we also have other ideas for you for the weekend:

Another great festival taking place is the International Vancouver Flamenco Festival with pop-up but also theatre performances on Saturday and Sunday. Also on Sunday, September 28th, the Shipyards Festival is held in the Lower Lonsdale District on the North Shore. The one-day event includes free admission, multiple stages, beer gardens and lots of different food to be discovered. Not to forget, the location also offers stunning views of the Vancouver skyline. Most conveniently, you can go there by sea bus which itself is always a fun thing to do. 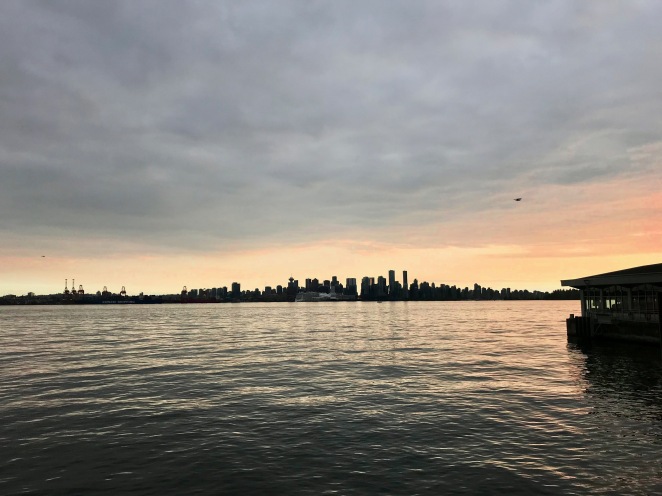 For those 19+, the Coquitlam Craft Beer Festival might also be an interesting event to attend. The festival takes place at the Hard Rock Casino featuring over 50 BC craft breweries, tasty appetizers and lots of interesting people to mingle with. In addition, it is Octoberfest time now all across the world. This weekend, on Saturday, one takes place at the Hastings Racecourse from 1 to 6 pm. You’ll find traditional fare, exciting horse races, live music, and of course, plenty of food and beer there.

Have a great weekend and see you at the movies on Sunday!! 🙂