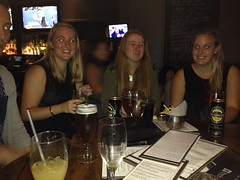 Last Friday we went out for our fantastic pub and club night at Public Library Square.  This was also our pr-intern Alexandra’s last night out in Vancouver and surely she had a good time. Some of us tried out the food that this pub has to offer, while others chose to have a few beers. We all had a nice time chatting a bit about life in Vancouver and how everybody’s doing at work. It was really good to see a couple of new faces… I’m sure you guys are excited about what’s going to happen for the next couple of weeks. I’m sure that you’ll be doing great in whatever jobs or positions that you’ll be working during your stay.

Later during the evening the dinner tables were removed to make space for the dance floor, and the bar was open for cool drinks and tasty beers. It was time to dance the night away! An 80s and 90s party was fired up by the Library Square, and this was definitely something popular. During the evening more and more people flocked to the dance floor. Thanks to everybody who showed up for this great night out in Vancouver, I hope to see you again tomorrow for our pub night at Moose’s Down Under. Click here for more information on Wednesday’s pub night. Sign up for the pub night at Moose’s Down Under here.

Another great weekend is coming up! This time you can look forward to a nice long and extended weekend because of the public holiday, Labor Day, on Monday, September 1st. For this reason we have some extra suggestions for activities. The extended weekend at this time of year is by many seen as their last chance to really get out and enjoy the summer. You never know when it’ll start raining. 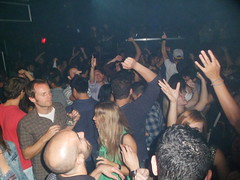 This Friday you should of course join INTERNeX for our Pub & Club Night. It will be Alexandra’s goodbye party, so we’re looking forward to see a lot of you. We’ll start at Library Square Public House at 7pm. More information on the Pub & Club Night can be found here. 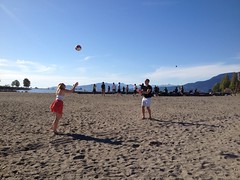 On Saturday you might have a bit of a head ache after our great party Friday. We therefore suggest that you calmly head towards Vancouver Maritime Museum to explore the history of the swimsuit. The museum is situated in beautiful Vanier Park. Here you won’t have to do a lot of thinking. Just walk around and enjoy yourself, while discovering the development in fashionable swimsuits. More info on this exhibit, the location and opening hours can be found here

After looking at the development within the swimsuit fashion, you could go to one of the many great beaches that Vancouver has to offer (English Bay Beach, Jericho Beach, Kitsilano beach… and the list goes on). Here you can (of course still without making too great an effort) do a bit of research on fashionable swimsuits in Vancouver. Click here for more information on the various beaches that Vancouver has to offer.

On Sunday you should hav 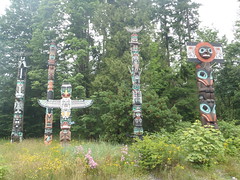 e overcome your hangover, so why not do something with little more activity. Enjoy the hopefully still nice and sunny weather and visit Klahowya Village in Stanley Park. Here you can experience the aboriginal culture of British Columbia. You can also have a look at different cultural performances or pay a visit to the aboriginal market. Click here for more information on this event.

Finally you can end of the long weekend with a thrilling and exciting experience. You should of course go to Hastings Racecourse and watch a horse race! If you’re 19 of age or above you’ll also have the opportunity to place bets on the different races. And there are also indoor viewing options in case it starts raining. Click here for more information on location and racing schedule 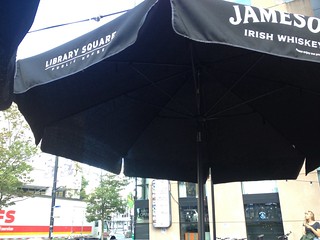 Soon it’s Friday again. But this will be a Friday like no other… it’s time for our pub & club night. Therefore we’ll meet up at 7pm at Library Square Public House. As mentioned before, this will be Alexandra’s last pub & club night, as she’s leaving Vancouver Sunday, August 31st. So be there to give Alexandra the best ever farewell party.

The daily special is featured local craft beer for $5.80. You can choose between a wide variety of food (nice soups, healthy salads or delicious burgers). To finish off your perfect dinner you can top up with a cheese cake or a chocolate brownie. Later during the evening Library Square will fire up a party with some 80s and 90s music… always great fun!

Remember that you have to show 2 pieces of ID. Library Square only let people in who are at least 19 years of age.

So come and join us for a fun night out in downtown Vancouver!

An amazing PuB and CluB NiGHT and a walk through Vancouver, enjoying beautiful weather: That was our weekend. I hope you had a good one as well but let me sum ours up for everybody who had to miss out on it.

On Friday, a few INTERNeX clients who were persistent to finish their working week with a group of nice people and good music met up in The Cambie downtown and enjoyed a few drinks. Even though it was PuB and CluB NiGHT, we were actually more chatting away then being crazy on the dance floor, but I just go ahead and say it was still a very nice night out. The music was a mixture between rock and the newest charts and something I can frankly not categorize, but it was fun watch a few Vancouverites dance to it 😉 Take a look at our Facebook pictures to get an impression…

After granting everybody one day off to get over possible hangovers, a small group of interested people met up again on Sunday. The task of the day was to explore some of Vancouver’s neighborhoods by foot. Luckily, the weather was absolutely beautiful: Loads of sunshine and no rain whatsoever! So our brave little group set out to explore and we started at the Vancouver Public Library. For all of you who have not yet taken a look at it: It is an impressive building resembling the ancient Roman coliseum and was built in the 90s.

Moving on, we went through Yaletown, Vancouver’s former meatpacking district. Though it’s taken years for the neighborhood to really catch on, it is now a funky upscale district of furniture shops, restaurants, multimedia companies, “New York-style” lofts, and lots and lots of clubs.

Continuing our excursion we were reaching False Creek and took the tiny Aquabus to set over to Granville Island, which is not really an island. It contains a collection of shops, restaurants, theaters, artists’ workshops, housing, a hotel, and still-functioning heavy industry. Right at the top of the Aquabus dock is the entrance into the Granville Island Public Market. And guys believe me: This is paradise! Everything that is edible was probably there. Mountains of fruit and candy. Just take a look at our pictures, it was just amazing!

After a short lunch break, who can resist eating if surrounded by food, we continued our walk. Strolling down the Island Park Walk, we had the chance to enjoy Vancouver’s beautiful skyline in the sunlight. Passing the Burrard Bridge, the Maritime Museum, and a 30 m (98ft.) totem pole, we finally arrived at Kitsilano Beach. One of the many beaches of Vancouver, offering a lot of free recreational activities, like for example volleyball courts.

So a relaxed afternoon came to its end and we have one more time a lot of pictures to share with you.

See you all again soon,

Erik went all out with his shorts and flip flops -I applaud you, sir!

Out of all of the pub nights and trips I have organized and attended, probably the most memorable event for me was last Friday.  We were all at the Morrissey pub on Granville street. It was such a fun night with everyone, I thought. Fun…and also very special.

It was actually different from our usual pub and club nights, because not only was it a Hawaiian theme, but also because Tim and our company partners from Denmark came to join us! It was so much fun to see every one enjoying their time, drinking beers, and smiling. I always know Morrissey is a great place for us!

As we were sitting at the pub though, I noticed people were taking turns and disappearing for a good five to ten minutes. Hmmm very interesting, I thought. When I asked where they were going, they said they needed to go to the washroom….that must have been a very long washroom break I must say. But later I found out why. My themed pub and club night turned into a my surprise goodbye party! Ilse presented me with a photo scrapbook with everyone’s comments in it. I was so caught off guard that I didn’t know how to react. I think that part of the night is what made it so special for me.

Then after, we made our way to VENUE! Enough being emotional because we had to go party it up and dance the night away at the club! Even Joan and Maria joined us to buy everyone a round of tequila shots! It was very very sweet of them and I’m sure all of us really appreciated it (not going to say who 😉 )! Overall it was such a successful, emotional, hilarious, and incredible night!

Thank you everyone for coming out that night and celebrating!